AVALANCHE AT A GLANCE 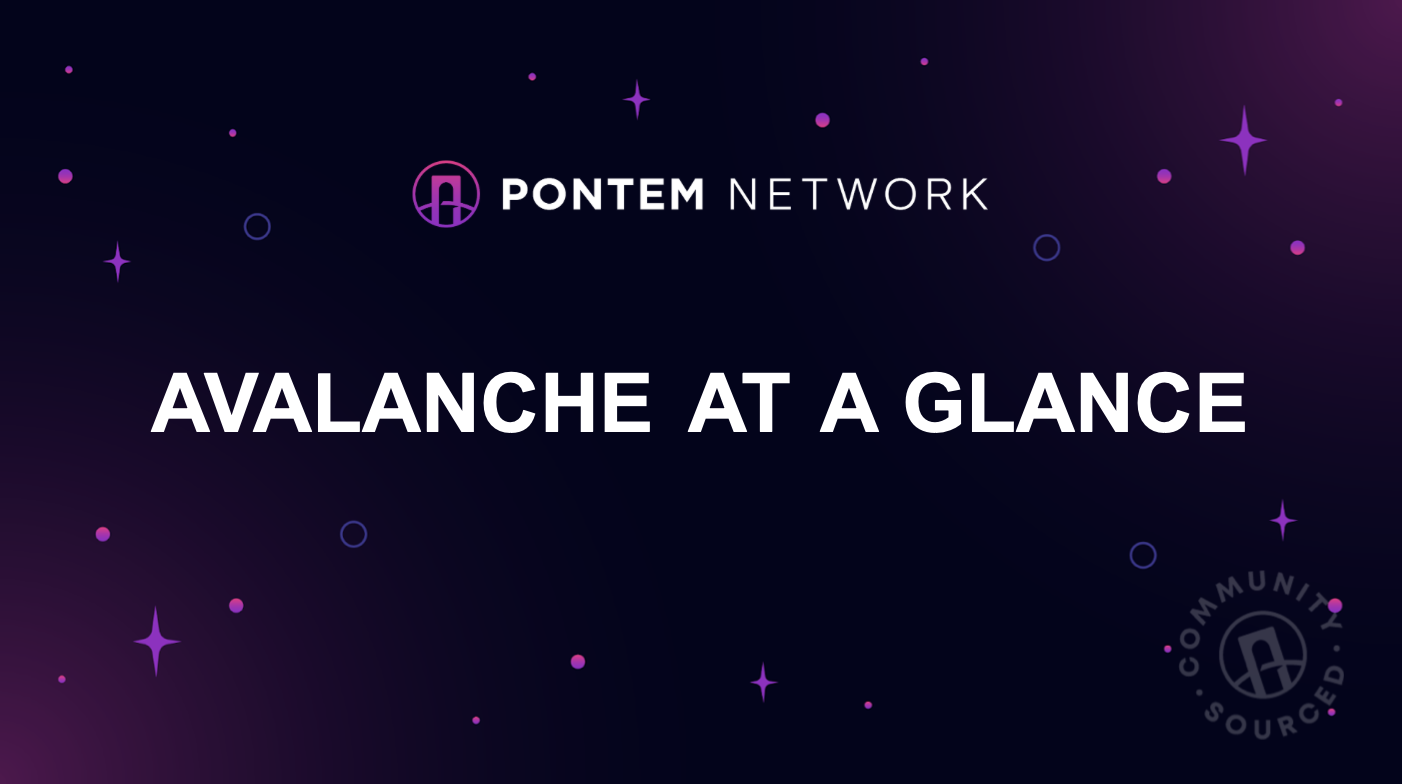 Avalanche is a highly-scalable, open-source blockchain that incorporates elements of other popular blockchains such as Ethereum and Polkadot and thus offers never-before-seen features. In this article, we examine the Avalanche Network and appreciate why when time-to-finality is put into consideration it is regarded as the fastest platform in the blockchain industry.

Avalanche (AVAX) is a safe, scalable, high-performance, and configurable blockchain platform that is focused on creating blockchains tailored for particular applications encompassing permissioned and permissionless deployments, and developing and releasing massively scalable, decentralized applications (dApps) amongst other possibilities.

Its native token, AVAX, serves as a fundamental unit of account among blockchains in the Avalanche network and is used to pay transaction processing fees and secure the network. As at the time of writing, AVAX had a market capitalization of about 6.858 billion US dollars and was trading at $27 - roughly 80% lower than in November 2021, when it was worth over $120.

Being the first decentralized smart contracts platform with nearly instantaneous transaction finality, Avalanche is designed to be massively scalable, reliable, and effective. Thus, Avalanche falls into the same category of extra-fast, next-gen solutions like Aptos, which also has subsecond finality.

Avalanche has faster speeds, greater throughput, and lower fees while being fully compatible with Ethereum assets, applications, and tooling. Due to this significant disparity, Avalanche is considered to be a formidable Ethereum competitor.

OVERVIEW AND HISTORY OF AVALANCHE

The chronology of Avalanche began on May 16, 2018, based on the work of an anonymous group of fanatics known as "Team Rocket'' who developed a consensus protocol known as Snowflake to address consensus-related issues in erratic devices which mainly suffer from Byzantine and crash-fault failures.

Emin Gün Sirer is credited for his involvement in developing the idea for karma, a peer-to-peer virtual currency, six years before Satoshi Nakamoto unveiled the Bitcoin whitepaper. He is also hailed for several accomplishments and contributions to computer networking, operating systems, and peer-to-peer systems.

Following their research, Emin Gün Sirer and his students Maofan "Ted" Yin, and Kevin Sekniqi, founded a startup technology company (AVA Labs) to build a blockchain network that would meet the sophisticated requirements of the finance industry. On February 1st, 2019, the Seed sale was officially confirmed, and 18 million AVAX tokens were sold for $0.33 per token.

In March 2020, the AVA codebase for the Avalanche consensus protocol went open-source, making it accessible to everyone. The initial coin offering (ICO) for Avalanche finished in July 2020, following a successful token sale of $42 million. Ava Labs launched the Avalanche blockchain in September 2020.

HOW DOES AVALANCHE WORK?

The developers of Avalanche set out to find a solution to some of the issues that Bitcoin and other more established blockchains frequently confronted. Some of these include issues with usability, scalability, and interoperability.

Avalanche addresses these issues by implementing a multi-faceted solution incorporated in its design encompassing the use of multiple built-in blockchains, the incorporation of subnetworks, and the Avalanche consensus.

Avalanche creates room for flexibility, speed, and security without making any compromises by dividing its architecture across three different blockchains.

To circumvent the constraints of the blockchain trilemma, Avalanche was developed using three distinct blockchains:

Avalanche's multiple built-in blockchains give developers a lot of freedom in the kinds of applications they can create, making it a strong platform for both public and enterprise use cases.

Each of these chains can be traversed by digital assets to carry out various ecosystem-wide tasks.

The Avalanche validators, validate and secure all three blockchains. Users of all custom Subnets must also be members of the Primary Network and are required to stake a minimum of 2,000 AVAX.

Subnetworks (subnets) are collections of nodes that take part in validating a specific set of blockchains and are responsible for reaching consensus on these chains.

By utilizing Avalanche's Subnetworks, users can initiate specialized chains that can function according to their own sets of rules.

Users can also build a private Subnet where only a select group of pre-specified validators are allowed to join and only those validators can see the contents of the blockchains. This is perfect for businesses that want to keep their information private.

Owners of Subnets offer incentives to Avalanche validators in exchange for validating their Subnet. Before joining a Subnet, Validators must take into account security and resource concerns.

When a user initiates a transaction, a validator node receives it and gathers a small, random set of other validators to check for agreement. The validators repeat this sampling process, "gossiping" among themselves until an agreement is reached.

The Proof of Uptime and Proof of Correctness metrics, which measure a node's historical compliance with the software's rules, are used to determine how much a validator is rewarded for validating transactions.

WHAT CAN I USE AVAX FOR?

AVAX is the native token of the Avalanche network. AVAX is a utility token and the primary medium of exchange in the Avalanche ecosystem and is typically used for payment of transaction fees, distribution of rewards, and a variety of other purposes.

Additionally, AVAX is employed for staking, which helps to protect the network and generate passive income on the network.

AVAX was developed to respond to shifting economic circumstances. The goal of AVAX's monetary policy is specifically to strike a balance between the incentives for users to stake the token and use it to engage with the range of services offered on the platform.

Staking rewards are determined by on-chain governance and are controlled by a function that is intended to never exceed the capped supply.

HOW DOES AVALANCHE  COMPARE TO ETHEREUM?

Irrespective of the fact that Ethereum furnishes a rich and empirical platform, it is currently losing acceptance from cryptocurrency zealots due to its exorbitantly high gas fees and scalability restrictions.

While Ethereum uses proof of work, Avalanche uses a proof-of-stake consensus algorithm which makes it more energy efficient and eco-friendly. (Read up on consensus mechanisms here). Nevertheless, the proof of stake protocol is being gradually implemented on the Ethereum platform.

Avalanche outperforms Ethereum in terms of gas costs as its fees are significantly less expensive than Ethereum's.

Aside from paying for transaction fees, Avalanche charges fees for activities carried out on the network, comprising creating and minting assets, staking, and blockchain creation. The AVAX tokens collected as fees are burned, perpetually reducing the amount of AVAX in circulation.

Avalanche can accommodate numerous transactions without needing more time to process them. Avalanche's superior scaling capabilities may give the Avalanche platform a long-term advantage over Ethereum, although Ethereum currently operates at a much larger ranking and supports many more projects and transactions.

WHAT DOES THE FUTURE HOLD FOR BLOCKCHAIN TECHNOLOGY?

Since the introduction of Bitcoin, numerous endeavors have been made to establish the next grand innovation in blockchain technology. Ethereum brought smart contract functionalities and decentralized applications to the scene and quickly rose to dominance. Currently, many new blockchains are competing for a piece of the pie, each with its distinct benefits and features.

Avalanche makes it seamless for people and businesses to deploy their purpose-built blockchains irrespective of their use cases and creates an incredibly decentralized and robust platform for developers to build on by combining some specially created blockchains with a potent variant of the proof of stake consensus mechanism.

The next phase in the evolution of blockchain technology is here as layer one solutions like Aptos provide a sustainable solution to the blockchain trilemma.

The technological underpinnings of Aptos allow for its network to provide the most secure and production-ready blockchain that can scale without hiccups.

Pontem is positioned to develop the first product for the Aptos blockchain and also contribute to the growth and advancement of this novel ecosystem, by building the necessary decentralized applications that will enable billions of individuals to utilize it.

Pontem has pledged to use their years of experience working with Move to advance the creation of fundamental dApps, such as AMMs, and developer tooling for the new Aptos ecosystem.

Pontem is a product development platform that enables global financial inclusion through blockchain technology. As a result of its alliance with Aptos, Pontem can create the foundational dApps, EVMs, AMMs, and other infrastructure needed to adopt its layer one blockchain.