The Three Types of Stablecoins 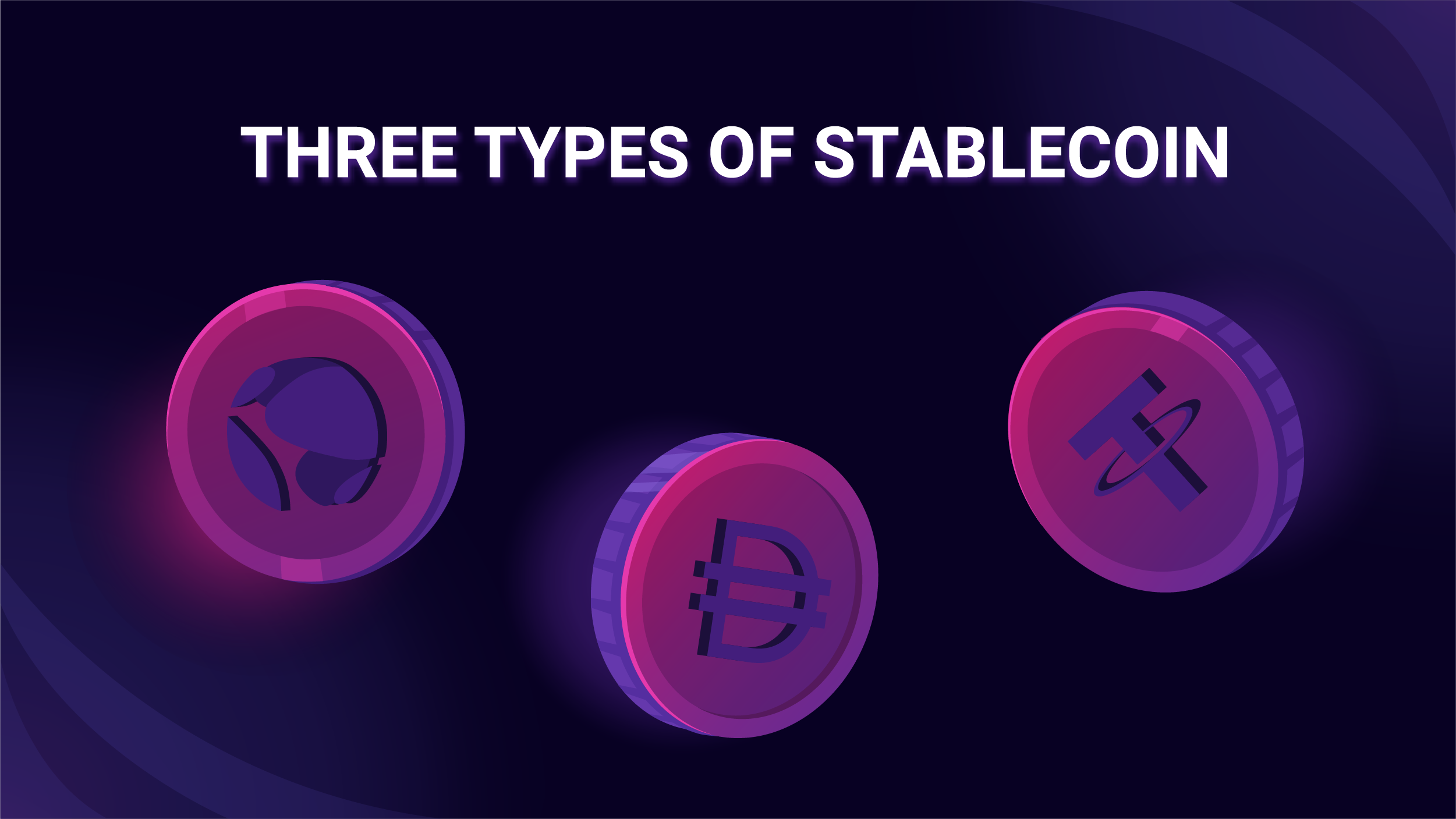 There are so many buzzy hot topics in crypto -- NFTs, play-to-earn gaming, Web3, decentralized finance -- and we love to cover them here. But those exciting new projects are only one part of the cryptocurrency and blockchain ecosystem. Those areas are backed by a larger, non-speculative financial infrastructure which undergirds the entire space. Most of that is accomplished through stablecoins.

A stablecoin is a cryptocurrency token that has its price pegged to an existing fiat currency, usually the US dollar.. The value of stablecoins is just that -- stable -- in comparison to other, volatile cryptocurrencies. While Bitcoin or Ether fluctuate wildly, sometimes even from one minute to the next, stablecoins like Tether, USDC, Terra Luna, and others are designed to stay as close to $1 as possible. They very rarely fluctuate more than one penny in value.

This makes stablecoins an incredibly useful and important element of crypto and DeFi. Stablecoins are effectively a bridge between fiat-based traditional and centralized finance and crypto-native decentralized finance. They allow people and businesses to enjoy the benefits of crypto, such as decentralization, speed,and anonymity, while maintaining the same accounting units and avoiding price fluctuation. For these reasons, the combined market cap of all stablecoins is well above $100 billion.

Stablecoins maintain this price stability by being pegged to a reserve currency (a global currency that is used to transmit value worldwide), almost always the US dollar. There are three main methods to achieve this peg:

Let’s break down how these stablecoins work and the benefits and drawbacks to asset-backed, algorithmic, and mixed asset-algorithmic stablecoins.

Asset-backed (or collateralized) stablecoins represent the most dominant type. In fact, these cryptocurrencies have some of the highest market capitalizations and volumes of any crypto. These stablecoins maintain their value of $1 per coin by backing each coin in reserve assets. That is, if the issuer has $1 billion in stablecoins in circulation, they intend to hold $1 billion worth of assets for which the stablecoins can be redeemed. These reserve assets can be straightforward US dollars, or a combination of assets including bonds and other currency. The makeup of those reserve assets can be a source of controversy, as we will see in the case of Tether.

USD Coin, also commonly called USDC, is a “digital-dollar stablecoin” created by Circle. Each USD Coin is worth $1. Today, there are 42.6 billion USDC in circulation and more than $1.5 trillion has been transferred on-chain. USDC is transmittable across several blockchains (Ethereum, Solana, Tron etc.) and integrated as a smartchain into essentially every major wallet, exchange, and decentralized application.

Each USD Coin is backed 1:1 in dollars, which are held in US-based accounts to ensure USDC is always redeemable for fiat currency. Circle uses accounting firm GrantThornton to audit this claim and publishes their report monthly. This lends a great deal of transparency and trust to USDC, which has made it an industry standard stablecoin.

Tether (traded as USDT) is a Hong Kong-based company that issues a number of asset-backed pegged stablecoins. Tether stablecoins are pegged to dollars, Euros, and the Chinese yuan and are available on bitcoin (Omni and Liquid Protocol), Ethereum, EOS, Tron, Algorand, SLP and OMG blockchains. Tether is the largest stablecoin and fourth largest cryptocurrency by market cap.

Like USDC, Tether is backed 1:1 in assets. However, while USDC is backed exactly in US dollars, Tether uses a basket of assets including cash, “cash equivalents, receivables from loans made by Tether to third parties,” and commercial paper (short-term loans issued by a company),. This mixture, as well as the lack of any outside audits for a period of years, led to scrutiny. The New York Attorney General fined Tether $18.5 million for overstating the quality of their reserve assets by holding almost half in unspecified commercial paper. Today, Tether issues accounting reports attesting that the stablecoins are redeemable for cash, but the company has not undergone an outside audit. As a result, Tether is sometimes assumed to be riskier than USD Coin since it lacks 1:1 cash backing like Circle.

Pax Dollar (USDP) is a stablecoin issued by Paxos, which integrates effortlessly into Paxos’s other financial products. Pax Dollar is regulated by the New York State Department of Financial Services and backed by reserves held in cash and cash equivalents Paxos claims to offer “unparalleled assurance to customers that their USDP is backed one-to-one by the dollar,” and USDP is redeemable for dollars at any time. Paxos contracts Withum to audit their reserves and publishes attestations every month.

In addition, Paxos offers a “stablecoin as a service” product, which allows other firms to create their own branded stablecoins. “Paxos serves as custodian for the cash and cash-equivalent reserves backing [the] stablecoin, ensuring that the reserves are held in either or both (i) fiat cash in dedicated omnibus accounts at insured U.S. banks and/or (ii) U.S. Treasury bills.” These reserve balances are also audited monthly. This service was used to create the BUSD stablecoin on Binance, which is an extremely popular stablecoin in itself.

While asset-backed stablecoins are understood to be stable due to their underlying assets, there is an obvious challenge to issuing this type: it requires huge amounts of cash to be kept on-hand. An alternative to this is algorithmic stablecoins. These use mathematical algorithms, encoded through blockchain smart contracts, to stabilize the coin price to the reserve currency peg. In many cases, this is achieved by issuing a governance token (a blockchain token that entitles the holder to voting rights and can have value in itself) alongside the stablecoin. In order to price fluctuations of the main stablecoin, the governance token may be bought, burned, or arbitrated. Let’s look at a few algorithmic stablecoins:

Terra is a “public blockchain protocol deploying a suite of algorithmic decentralized stablecoins,” primarily $UST. The Terra blockchain is used for hundreds of decentralized applications around the world, with $UST as the uniting stablecoin of that ecosystem. $UST is the shining example of an algorithmic stablecoin, and it is powered by Luna, the governance token of Terra.

To maintain the price of Terra (shorthand for $UST) at its dollar peg, a supply pool of Luna is adjusted. “Users burn Luna to mint Terra and burn Terra to mint Luna,” in effect maintaining a state of homeostasis that keeps things in balance. This flow is incentivized by the protocol’s “algorithmic market module.” The three dominant means by which Terra is adjusted are expansion, contraction, and arbitrage, all of which are controlled by the algorithm. Understanding Terra is a shortcut to understanding the peg mechanism of algorithmic stablecoins.

Iron Finance produces the dollar-pegged IRON stablecoin, which was secured by the TITAN governance token. In June 2021, IRON lost its peg in dramatic fashion. A few whales (large holders) who had been staking IRON removed their holding from liquidity pools and immediately cashed out for USDC, instead of redeeming for IRON. This caused IRON to lose its peg and the price of TITAN to plummet. The founders called this nightmare situation the “world’s first large-scale crypto bank run.”

However, users were insistent this was not a scam or any type of fall play. Instead it was “due to how the ‘tokenomics’ of this particular DeFi project functions.” When IRON is minted, the demand for TITAN increases, driving up the price. But in the opposite direction, when the price of TITAN fell rapidly, IRON lost its peg. (This illustrates the importance of Terra being able to expand and contract, to regulate the Terra price in both directions.) Eventually, the price fell to zero and the project began the long process of liquidating the remaining assets. Iron Finance intends to re-launch a stablecoin project, this time using over-collateralisation and a supply cap on IRON to stabilize the price.

By now, you might be wondering if there is some way to combine the stability of asset-backed or collateralized stablecoins with the nimbleness and lower start-up costs of algorithmic. You’re not the first! Several stablecoin projects use both collateral and algorithms to maintain a stable peg, often combining these methods in very creative ways. DAI and Frax are two of the most prominent examples of “mixed” stablecoins.

Dai is a dollar-pegged issued by Maker DAO, one of the most famous decentralized autonomous organizations in the crypto space. MKR is the governance token of the DAO, which is used to regulate Dai. However, unlike Terra Luna, MKR is not the sole mechanism that is minted or burnt to control Dai.

Instead, a wide range of collateral assets are used to back Dai. “Dai is generated, backed, and kept stable through collateral assets that are deposited into Maker Vaults on the Maker Protocol.” Any Ethereum-based digital asset can be used for collateral, as long as it has been approved by MKR holders in the DAO. They must also select Risk Parameters, encoded as smart contracts, for each digital asset based on the stability of that asset. These Risk Parameters are necessary since the reserve assets are not just US dollars like Circle or Paxos hold, which are incredibly stable. (In fact, Risk Parameters could theoretically be used by Tether since they hold a basket of assets as their coin’s collateral.) The combination of collateral controlled by Risk Parameters which are enforced by the protocol is a great example of mixing asset-backed and algorithmic approaches.

The MKR token is used for auctions, which are Maker DAO’s method of exchanging MKR for Dai to regulate the price, similar to other algorithmic stablecoins. There are three main types of auctions:

A final algorithmic mechanism is the Emergency Shutdown. This functions as a kill-switch on auctions, burning, and minting as a “last-resort mechanism to directly enforce the Dai Target Price.”

Another creatively-managed stablecoin is Frax, which is billed as a “fractional algorithmic” stablecoin. In fact, the Frax Protocol claims to have “introduced the world to a concept of a cryptocurrency being partially backed by collateral and partially stabilized algorithmically.” Each Frax token can be redeemed for 1 dollar. Frax Shares (FXS) is the governance token and regulatory mechanism for Frax.

At all times, a user must input $1 of value into the system in order to mint 1 FRAX. A unique twist is that the proportion of assets making up that $1 of collateral changes over time. It started at 100%, meaning 1 US dollar must have been inputted to mint 1 FRAX. As more FRAX was minted, that percentage decreased, with the rest of the value replaced by burning FXS. Currently, the collateral ratio is 84.25%, meaning a user must input $0.8425 in dollars and burn $0.175 worth of FXS in order to mint 1 new FRAX. This is an intriguing way of regulating the supply of FRAX in circulation, since as time goes on, more and more FXS must be burnt in order to mint a new token.