A BIRD'S-EYE VIEW OF CARDANO 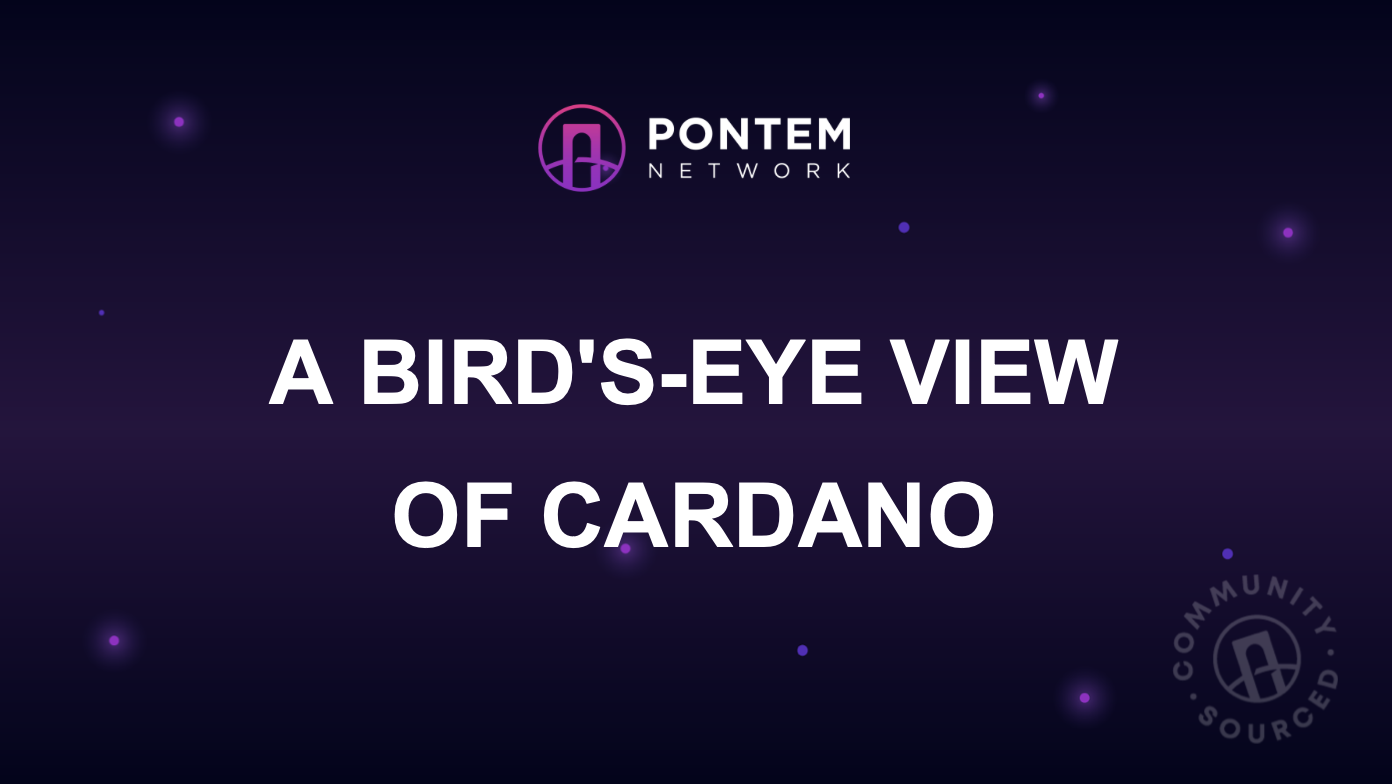 If you keep up with the trends in blockchain technology you probably would have heard of Cardano (ADA) - a popular cryptocurrency that recently added smart contracts and now has a rapidly growing ecosystem.

Cardano is an open-sourced, proof-of-stake, decentralized blockchain platform that is regarded as a third-generation blockchain, because it integrates the qualities of the previous generations and develops to meet the changing needs of its users.

Cardano powers many DeFi, NFT, and Metaverse-based projects and provides developers with the tools and technology they need to explore and develop solutions using the virtually endless potential of blockchain technology.

According to data from Statista, showing Cardano's (ADA) dominance history up until May 10, 2022; although the numbers in November 2021 were fewer than they were at the end of August, Cardano's usage climbed by more than four times in 2021.

As Cardano is growing into a popular blockchain for decentralized finance (DeFi) applications, in the future it could become a viable alternative to Ethereum, Avalanche, or Fantom.

OVERVIEW AND HISTORY OF CARDANO

Cardano's journey commenced in 2015, during its early stages of development, and was inaugurated by the co-founder of Ethereum Charles Hoskinson, in 2017.

The platform's name honors Gerolamo Cardano, an Italian mathematician, and polymath, while Ada Lovelace, an English mathematician, who is applauded as the first computer programmer is commemorated by the name of its native coin - ADA. Cardano has three strong backers:The Cardano Foundation, Input Output Hong Kong (IOHK), and Emurgo.

The Cardano Foundation is a prominent non-profit organization that is committed to ensuring Cardano's development and ecosystem growth. Input Output Hong Kong (IOHK) is a world leader in blockchain infrastructure research and engineering and was assigned to work on Cardano from 2015 through 2020. EMURGO is the Cardano blockchain's official commercial arm and a founding entity that offers solutions to developers, entrepreneurs, businesses, and governments.

Cardano was designed to be a durable and long-lasting blockchain based on the basic tenets of interoperability, scalability, and above all security. Ultimately, it was assembled as a proof-of-stake solution, which infers that it is way more efficient than proof of work.

The capability to communicate with other systems - Interoperability is a key architectural component of Cardano. The implementation of side chains is considered by many industry experts to be one of Cardano's architectural breakthroughs as it allows developers to categorize the system and promote interoperability within the blockchain.

HOW DOES CARDANO WORK?

Cardano is developed through peer-reviewed academic research, as it is based on a series of scholarly publications rather than a solitary publicized white paper.

Plutus and Marlowe, Cardano's proprietary programming languages for smart contracts, are provided as a set of libraries for Haskell which is considered by many academics to be a highly sophisticated programming language for developing high-performance software.

By utilizing the existing Haskell documentation, toolkits, and highly skilled community, these libraries serve as a foundation for the development of secure and operational smart contracts. This makes it possible to carefully implement Plutus and Marlowe smart contracts in explicit, rigorously validated code that provides a high level of certainty.

Cardano, which was created using a variant of the Proof-of-Stake (PoS) consensus system called Ouroboros, utilizes a layered design to deliver numerous capabilities. Ouroboros provides stringent security assurances; it was provided with multiple peer-reviewed papers proposed at some of the world's best conferences and publications in cryptography and cybersecurity.

To maintain system durability and adaptation, governance is crucial to the Cardano design. Cardano boasts of a well-developed governance structure which they allege facilitates its long-term development to be funded effectively and democratically.

Ouroboros provides a verifiable method for choosing a validator at random and guarantees that all holders of ADA tokens that stake ADA to the Cardano blockchain have an equal opportunity to mine a block and get the corresponding compensation.

WHAT CAN I USE ADA FOR?

ADA allows for a secure transfer of value between any user, in the world, without the need for an intermediary. The Cardano blockchain stores a perpetual, encrypted, and accessible record of every transaction made with ADA.

As compared to other cryptocurrencies like Bitcoin and Ethereum, Cardano has its wallet for ADA - Daedalus wallet. Users of the Daedalus wallet will not only be able to manage their assets but will also be able to operate a blockchain node and guarantee transparency in the Cardano network.

For as long as you own some ADA, you own a share of the Cardano network as well. ADA that is kept in a wallet can be committed to a staking pool to boost the pool's chance of winning prizes or to earn rewards for contributing to the smooth operation of the network. In the future, ADA will be applicable for a range of services on the Cardano blockchain.

As stated in Cardano's Roadmap, Cardano is being developed in five stages and this is done to revamp the network into one that supports the development of decentralized applications with a multi-asset ledger and substantiated smart contracts. Each of the five phases is named after a notable chronological figure and is cited genetically as an era. The five phases, or periods, are as follows:

All the phases are built around a collection of features that are published across successive code deployments. While these development streams are provided progressively, the work for each of them occurs in tandem with inquiry, experimentation, and development frequently occurring concurrently throughout the many stages.

After completing the Byron and Shelley phases, Cardano is currently in its third phase of development, and an upgrade is expected to happen anytime soon.

HOW ARE UPGRADES DONE ON CARDANO?

Hard forks have usually been used to upgrade blockchains. When a hard fork occurs, the current protocol is terminated, current regulations and modifications are enforced, and the chain is restarted with its record destroyed. Compared to other blockchains, Cardano handles hard forks uniquely. Rather than causing disruption, the Cardano hard-fork combinator technology allows a smooth transition to a new architecture while preserving the history of earlier blocks and creating no disturbances to users.

Following the final release of Cardano's Goguen on September 12, 2021, along with the Cardano Alonzo mainnet hard fork that permitted users to be able to write and deploy smart contracts on the Cardano blockchain, the next stage on the Cardano roadmap is the Basho upgrade which is expected to happen in 2022. The Basho upgrade will endeavor to increase the scalability of the network by inaugurating sidechains to alleviate the computational burden of the mainchain.

Let's not forget Voltaire, which is the final phase of Cardano's development that comes after the Cardano Basho phase. As Cardano evolves away from IOHK's management, this governance phase will provide a voting and treasury system that will allow holders to get a more direct impact on the decentralized network.

Nevertheless, according to its roadmap, the Cardano Vasil hard fork, which is required to lessen the cost of large transactions, is the most immediate update. Although, the date of the Vasil hard fork which was originally fixed to occur on the 29of June has been rescheduled for the last week of July due to minor issues encountered by the development team.

Input Output Hong Kong (IOHK), Cardano's development team, has released a new light wallet - Lace which was developed with the backing of a side chain solution formulated by the Cardano development team.

This new wallet possesses a slew of functionalities, and it allows users to access, control, and hold their cryptocurrencies all in one place. Lace also allows users to maintain their Non-Fungible Tokens in the same wallet, allowing them to manage all of their digital assets in one wallet without relying on central authority solutions.

WHAT DOES THE FUTURE HOLD FOR CARDANO?

A significant upgrade, such as the Vasil Hard Fork, can have a variety of consequences on the price of Cardano's ADA.

As seen from the all-time performance chart of ADA provided by coin market cap, ADA enjoyed a price boom in early 2021, reaching a high in May that drew the attention of several powerful players and investors.

ADA on the other hand, fell almost 46 percent a few weeks ago when crypto markets, in general, went bearish.

As a result of the market's volatility, forecasting the price of cryptocurrencies is arduous. Experts, on the other hand, have spoken out, anticipating what will happen to the worth of the ADA coin in the coming years, and from all indications, there is hope for a bullish run anytime soon.

Notwithstanding, Cardano will continue to evolve over the next few years with the Cardano Roadmap spelling out additional network features and functionalities.

The next significant breakthrough scenario for the world's growing economies may be enabled by blockchain technology, and more especially by a decentralized solution like Cardano.

Due to Cardano's decentralized structure, users can gain access to a global financial environment supported by the finest decentralized applications and smart contracts from anywhere in the globe.

A wide range of integrated social and financial services might be developed on-chain by combining Cardano's value layer with the capacity to hold and analyze information on-chain using smart contracts.