A DEEP DIVE INTO SUSHI SWAP 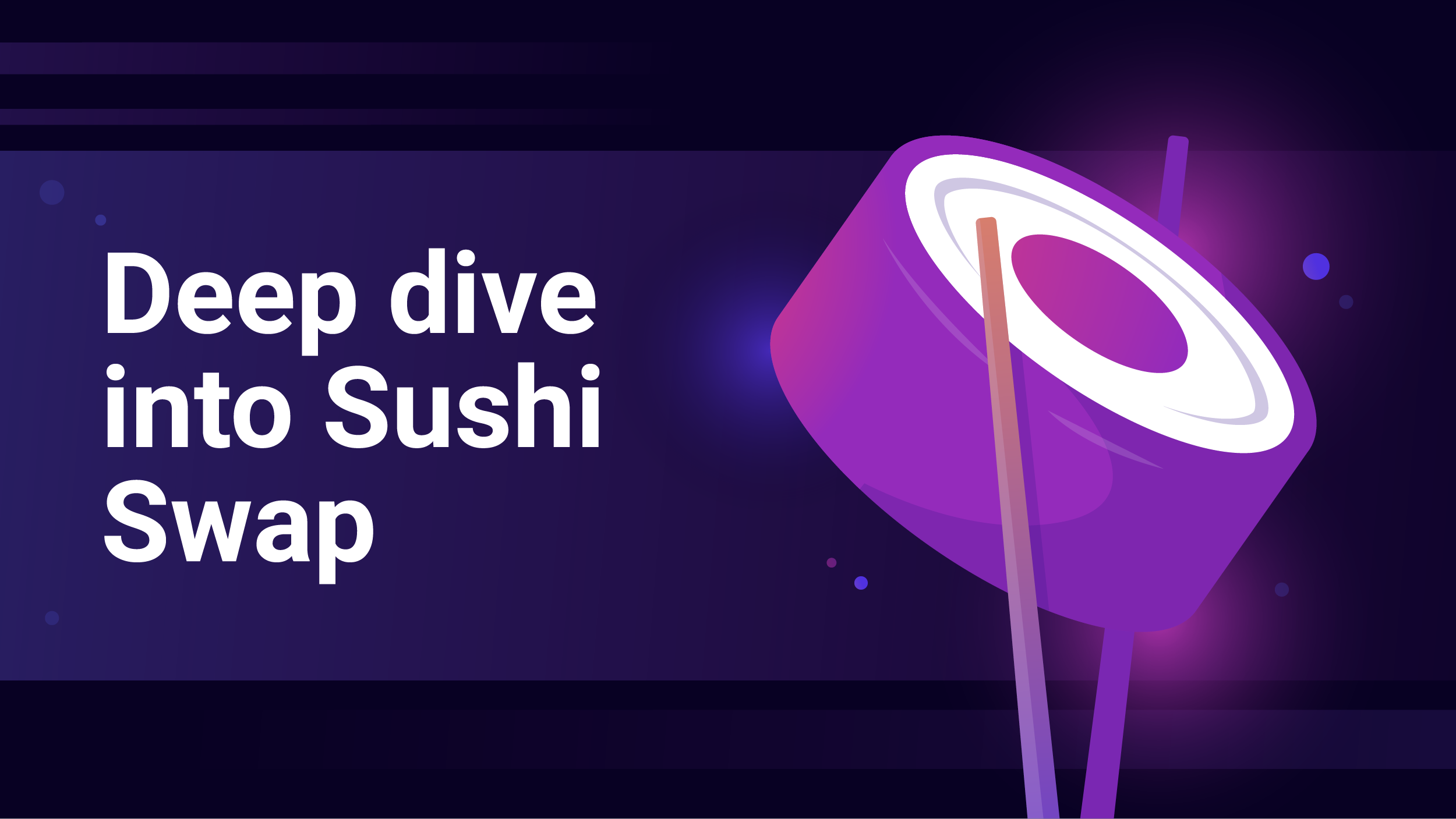 WHAT IS SUSHI SWAP?

The SushiSwap exchange was created based on the open-source code of Uniswap, the most popular decentralized exchange on the Ethereum blockchain today. For this reason, SushiSwap can be called a fork of Uniswap and has many of the same features. It is an AMM (automated market maker) running on 14 blockchains, including Ethereum.

SushiSwap was launched in September 2020 by two anonymous developers - Chef Nomi and oxMaki. Its ownership was later transferred to Sam Bankman-Fried, the CEO of the FTX exchange.

Unlike some DEXs that only work on one chain, such as Uniswap (Ethereum) and PancakeSwap (Binance Smart Chain), SushiSwap runs on multiple chains, including:

Apart from swapping tokens, SushiSwap provides a large range of DeFi services, including lending, borrowing, yield farming, etc. Its native token, SUSHI, can be considered a governance token, allowing users to influence the future of the SUSHI token price and roadmap.

As was earlier mentioned, SushiSwap began as a fork of Uniswap but had some key differences.

Most notably, rewards to liquidity providers are distributed in SUSHI, which also serves as the governance token. Unlike Uniswap (UNI), SUSHI holders can continue to earn rewards even after they stop providing liquidity.

When it had been first launched, Sushi Swap encouraged liquidity providers to stake their liquidity pool (LP) tokens on Uniswap by paying out extra SUSHI rewards with a high annual percentage yield (APY). Within every week, SushiSwap successfully attracted over $1 billion in liquidity and therefore the TVL reached over $150 million. The staked LP tokens were then migrated from Uniswap to SushiSwap after a period. This implies that each one Uniswap LP tokens staked on SushiSwap were redeemed on Uniswap for the tokens they represent. New liquidity pools were also created with them on SushiSwap, marking the launch of the SushiSwap exchange.

In Q2 2021, the SushiSwap ecosystem unveiled its latest addition, a non-fungible token (NFT) platform called Shoyu. The concept of Shoyu came from a SUSHI governance member, who proposed to create Shoyu, an easy-to-use NFT platform. It aims to tackle the present shortcomings of NFT marketplaces, like limited file format options, limited image sizes, and therefore the high transaction fees on Ethereum.

What cryptocurrencies can you trade on Sushi?

The list goes on and on and is a mirror to Sushi’s ability to meet the needs of billions of users worldwide.

Here are some key benefits and limitations of the SushiSwap exchange:

How does Sushi Swap work?

As mentioned, SushiSwap is an automated market maker (AMM) protocol that works as a decentralized exchange. There's no order book or centralized authority; cryptocurrency trading on SushiSwap is processed by the smart contracts in liquidity pools.

Anyone can become a liquidity provider on SushiSwap and earn rewards in proportion to their share of the pool. This is often done by depositing the same value of two tokens within the pool. Each pool works like a market, where other users can come to shop for and sell tokens. you'll swap ERC-20 tokens as you'd on other DEX protocols. For instance, you'll be able to exchange stable coins like USDT and DAI into cryptocurrencies like wrapped bitcoin (WBTC) and ether (ETH).

Also, there are different sushi-themed products for users to earn passive income. For instance, you'll stake SUSHI within the SushiBar and receive special xSUSHI tokens. xSUSHI allows holders to earn a 0.05% reward fee for all trades from all liquidity pools. Following the launch of Shoyu, SUSHI holders who stake their tokens for xSUSHI also will be eligible to receive 2.5% of each NFT trade on the NFT marketplace.

Not only has SushiSwap created opportunities for its users to earn passively, the project through various user-favorite products has created vast innovative applications for art, token creation, lending and borrowing, etc. Here are a few:

Shoyu: Shoyu, in Japanese means “soya sauce” – which aligns with SushiSwap branding while in English it is a world play on the phrase “show you” to enable NFT artists to showcase their digital art to the audience around the world.

Announced in Q2 2021, Shoyu is changing the way creative commerce is perceived and aims to become the cultural standard for NFT platforms, empowering artists, enabling collaboration, and encouraging creative commerce. Through the power of Sushi (Sushi.com), Shōyu is one of the first artistic marketplaces that marries the art world with the technological innovation of decentralized finance.

A key component of Shoyu’s offering is its beautiful “Immersive Gallery Mode” where NFTs are categorized into customizable gallery spaces and users can take a virtual walk in this gallery courtesy of the 3D metaverse gallery view.

With just a few clicks, Miso endows SushiSwap users with the ability to create their very own secure and powerful tokens, ready for good old auctioning. This is the protocol's way to encourage new projects and ideas among its users.

For a complete guide on how to create a token on MISO, take a look at the sushi.com guide.

During the development of the BentoBox, the Sushi team found that one product had amazingly become two and so decided to separate “Bento” from “Kashi”.

The BentoBox is fundamentally a vault, doing the job of a decentralized app store where users can deposit assets and by so doing, centrally enable other Dapps. What's special about this vault is its ability to permit dual usage of a single asset, providing extra revenue and enabling the user to maximize token usage and yield.

Kashi, a margin trading platform powered by its lending protocol, was the first Dapp within BentoBox. While Bento centrally held the tokens, Kashi utilized those assets for lending, borrowing, and a one-click leverage trading transaction option which gave users a wide range of tokens from which they could create lending token pairs however they saw fit and of optimum gain.

Both Dapps are game-changers for Sushi as they not only serve trading needs optimally but also cut gas fees due to Bento’s central design.

It is important to note that:

WHAT’S NEXT FOR SUSHI?

Even though there had been many speculations on what the platform's well-kept secret announcement was going to be (none came close to guessing right); Sushi was glad to be able to surprise their very hungry community with the exciting news and a first look into The Sushi Next Generation AMM: TRIDENT.

According to Sushi, Trident was first developed with the core focus of capital efficiency and cryptocurrency volatility protection using powerful, yet intuitive and easy-to-use, tools to provide DeFi with its new protocol standard. “Our goal was to reinvent the wheel, without sacrificing user familiarity with Sushi’s newly revamped and consolidated interface”.

“Being a community-centric platform, we are given priceless feedback from our users daily. With that information, we strive to constantly improve the Sushi user’s DeFi experience, but also know that certain pain points for DeFi users in general, made simple transactions either confusing or expensive or both, resulting in costly, irreversible mistakes. With this in mind, we knew that we couldn’t be comfortable with minimal updates to appease simple design or site flow inconveniences, especially due to the recent rehaul, asking the Sushi community to relearn a new Sushi site again would be too big of an ask. Big changes were needed, fundamental changes, but, more importantly, we needed you, our community members, to barely notice them,” wrote the team on Medium.

Trident was launched on Polygon in March 2022.

In summary, SushiSwap offers lots of earning opportunities for its users. For starters, It facilitates the quick swapping of crypto assets and is a simple way to earn profits. Users can achieve this by contributing some amount of crypto to a liquidity pool adding to its growth.

The multidimensional platform also offers several useful products aimed at satisfying the needs of users in all blockchain spheres.

All this being said, SushiSwap seems to be serving up more and more delicious meals. Its core developers and community are commendable and may just be enough to carry the project further into the future.

Pontem is a product studio working toward global financial inclusion powered by blockchains. We are partnered with Aptos to build foundational dApps, development tools, AMMs, and more. The Move IntelliJ IDE is just the beginning.

Pontem offers a head start to developers looking to design projects for a Diem-powered metaverse.