A DEEP DIVE INTO TRON 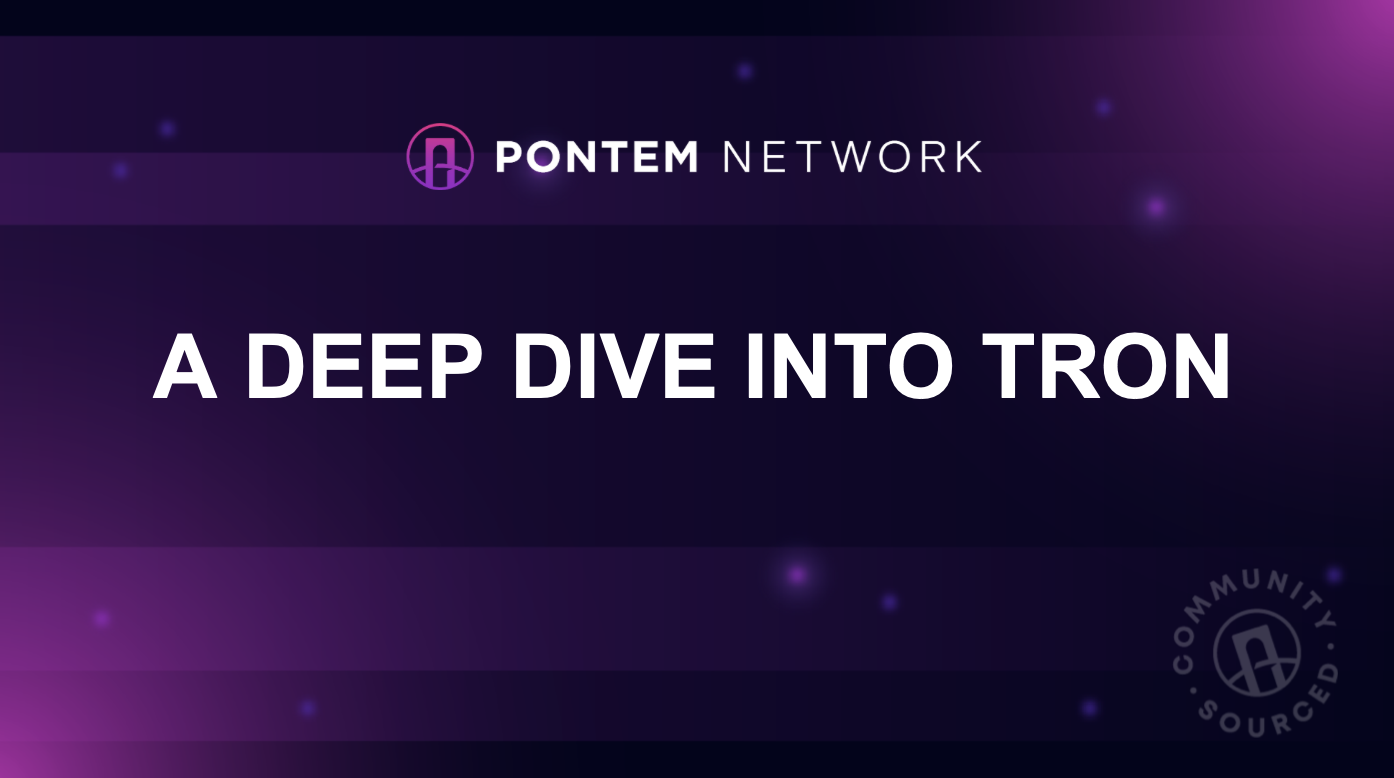 Tron is an open source, blockchain-powered operating system that facilitates the development of decentralized applications (dApps) and decentralized content exchange. Its native token TRONix (TRX) permits users to gain access to distinctive functions in its network. In this article, we present an overview of the Tron ecosystem, its distinctive features, and how it aims to serve as the foundation of a decentralized internet.

Tron is a blockchain platform modeled to provide blockchain developers with the necessary tools they need to develop decentralized applications and smart contracts as well as to securely share, control, and manage data and other sorts of information.

Tron is regarded as one of the unique cryptocurrency platforms because of its wholly unique viewpoint and goals. Its native token TRX drives the network, and interestingly, the network incurs no transaction fees.

Tron is built to facilitate huge on-chain scalability, and developers can create apps that may serve tens of thousands of users at once. Thanks to its delegated proof of stake consensus algorithm, the Tron network is capable of handling 2000 transactions per second with ease. With this performance, Tron is on par with significant protocols like  Aptos, which has subsecond finality.

OVERVIEW AND HISTORY OF TRON

The dawn of Tron's origins occurs early in 2017. At that time, Justin Sun, the company's CEO, formally established the Tron Foundation, a non-profit with offices in Singapore. The objective of this group was to construct the foundation for a decentralized internet and to establish a democratic framework for managing the new network.

Through an ICO in 2017, the Tron Foundation generated $70 million, just before China prohibited initial coin offerings. By March 2018, the testnet, Blockchain Explorer, and Web Wallet had all been released. Soon after, in May 2018, Tron Mainnet went live, heralding a significant technological achievement for the network.

Another significant breakthrough occurred in June 2018 when Tron changed its protocol from using an ERC-20 token on the Ethereum network to a standalone peer-to-peer network. On their path to establishing a fair ecosystem for sharing media on the internet, Tron bought BitTorrent, a decentralized file-sharing platform in July of the same year.

The TRON Foundation decided to disband itself on July 25, 2021, having accomplished its historical purpose of creating a decentralized autonomous organization for the community. Currently, 27 super representatives hosted by the community oversee the entire Tron network.

HOW DOES TRON WORK?

The Tron network is devoted to advancing the democratization of the internet via the use of blockchain technology and decentralized applications (dApps).

The Tron Virtual Machine (TVM) is a significant, Turing-complete virtual machine developed for the Tron environment. The primary objective of the TVM is to deliver a customized blockchain system that is productive, credible, functional, protected, and scalable.

The Tron blockchain was created to simplify communications and guarantee simple interaction with a variety of advanced programming languages, such as Java, Scala, C++, Python, and Go. This is possible because the Google Protobuf (Protocol Buffers) system, a serialization technique for structured data created to facilitate speedy and effective platform and system communication, was used to represent the Tron blockchain protocol.

A core layer, a storage layer, and an application layer make up Tron's three-layer architecture.

The foundational operations that make up the underlying protocol for the Tron blockchain are carried out by the core layer. Tron's core layer has several modules, including consensus, account management, and smart contracts.

Driving Tron's novel consensus process for adding new blocks to the chain is one of its main responsibilities. This layer is also in charge of the system's smart contracts and account administration.

The Tron storage layer is built to support the evolving Tron blockchain architectural environment's advanced data storage needs. It is designed to function as a strong networked system for data storage that provides a high level of vitality and protection.

The application layer is designed to simplify communication between software developers and the Tron ecosystem. Because the Tron blockchain contains an integrated smart contract mechanism, it has a lot of potential for enabling new apps built on top of the platform.

WHAT CAN I USE TRX FOR?

TRX tokens are required to interact with the Tron network. They can also be used to make payments for the use of native smart contracts, and decentralized applications, make payments for the goods and services that merchants and service providers on Tron deliver, and also for staking purposes to provide resources for the execution of smart contracts or the selection of Super Representatives.

The Tron network supports a substantial number of decentralized applications. Due to Tron's high scalability, throughput and the multi-language extension with Google Protocol Buffers, lots of developers are building their dApps on Tron.

The ranking of the leading decentralized applications on the Tron network can be seen here.

Some of the most popular decentralized applications in the TRON ecosystem are:

SunSwap is a decentralized exchange used to swap TRC-20 tokens. Thus, any two TRC-20 tokens can be converted quickly depending on system pricing. Without exceptions, the protocol's liquidity providers receive all transaction costs. Thus, ensuring Security and complete decentralization.

As at the time of writing SunSwap had a total value locked (TVL) of over $795 million. To fuel the steady expansion of DeFi, SunSwap aims to establish itself as the largest and most complete decentralized exchange in the market.

JustLend is the initial lending platform on Tron, where users may borrow, lend, or deposit assets to earn interest. Holders of JST can vote on initiatives that will determine JustLend's governance.

As at the time of writing JustLend had a total value locked (TVL) of over $3.84 billion. JustLend aims to create fund pools whose interest rates are set by an approach based on the demand and supply of Tron native assets.

By accurately forecasting the price of Bitcoin, users of Megabit may earn money. Players can also roll the dice in Lucky Dice to receive benefits.

Tron has been included in Samsung's Blockchain Keystore. This indicates that users of Samsung devices running the most recent software can now access Tron dApps via the Samsung app store.

Nevertheless, there have been several debates around Tron. In an intense blog post, the former CTO of the firm, Lucien Chen, said that; "Tron is not associated with the internet", and  "Tron is no longer decentralized," pointing out that 90% of the votes in Tron's system are centralized with a small number of voters.

Additionally, Tron has been charged with copying code from other cryptocurrency projects without giving proper credit.

Juan Benet, the creator of Protocol Labs, alleges that at least nine pages of Tron's white paper were taken verbatim from either the Filecoin or IPFS whitepaper, both of which he co-authored.

Wow! Absurd! TRON's "paper" is mostly copied from other projects, or is super basic p2p passed off as original. Zero references.

Archived that PDF in IPFS, in case they take it down: https://t.co/jv7EuSYenL pic.twitter.com/GbiL7MUrnc

Lots of critics assert that; given the level of copying, it is unlikely that Justin's explanation which implies that it was a mistaken translation of the English edition was accurate.

Juan Bennet also went ahead to drag Tron in a Twitter post where he further accuses the platform of not being able to come up with an original logo for BitTorrent.

Aaaaaahahaha it’s not enough to fork all our code, rebrand it and lie its theirs; copy paste random chunks of our papers, and defraud their investors with a nonsensical mishmash. Tron also can’t even think of an original logo 🤯🤣 https://t.co/h6EGPNwXzQ

This tweet is honestly painful to read. It's like looking at a zombie: the account *looks like* something you've grown up with and known and loved for 15 years, but underneath it's just, well, now it's just another appendage of the Sun dictatorship

Irrespective of all the criticisms, Tron continues to thrive and is notable for its emphasis on lowering the cost of distributing and gaining access to digital content.

Tron also boasts of a strong ecosystem of decentralized applications and DeFi products such as the decentralized exchange - Poloniex, and the JUST network of DeFi services.

HOW DOES TRON COMPARE TO ETHEREUM?

Although Tron lacks the ironclad security and decentralization that makes up the Ethereum network, Tron is able to complete transactions more quickly and cheaply, making it a faster, more scalable, and cheaper network than Ethereum.

Ethereum's solidity is the core smart contract language for the Tron blockchain ecosystem. Solidity was chosen primarily due to its ability to work with Ethereum and its simplicity and efficiency in the development and sustenance of decentralized applications (dApps).

Because the TVM is EVM compatible, it is easy for Ethereum developers to migrate their programs to the Tron blockchain. The TVM, in contrast to Ethereum, uses the idea of bandwidth rather than the gas mechanism found in Ethereum's EVM. Instead, TVM offers free transaction operations and smart contracts.

When it comes to decentralized finance, Ethereum takes the lead with protocols like Maker, Compound, Aave, Uniswap, SushiSwap and Curve Finance. Tron follows suit, as it is now the second largest blockchain for DeFi apps with a total value locked of over $5.9 billion, surpassing leading blockchains like the Binance Smart Chain, Avalanche, Polygon and Solana.

It is tough to determine which blockchain technology is superior at the moment. Although both technologies address distinct problems in the real world, they still retain a sizable user base and have plenty to offer their users.

Blockchain technology is a relatively exotic domain. Several platforms keep emerging, each with novel ideas and solutions. From the onset of Bitcoin to numerous innovations brought to the scene by Ethereum and other leading layer one solutions like Solana, Avalanche, Cardano, and Tron, the sky is the threshold  as there is still plenty of room for improvement since these Layer 1 blockchains still struggle with difficult problems that are preventing mainstream adoption.

Pontem and the Aptos are working together to create open source solutions using the Aptos Blockchain technology.

Pontem is a product development platform that enables global financial inclusion through blockchain technology. As a result of its alliance with Aptos, Pontem can create the foundational dApps, EVMs, AMMs, and other infrastructure needed to adopt its layer one blockchain.

This is some text inside of a div block.
5
min read
TECHNOLOGIES THAT DRIVE CONFIDENTIALITY ON THE BLOCKCHAIN
3
0
a-deep-dive-into-tron
63060c3a4096fe6712f89e39
amb-a-deep-dive-into-tron
Login
Thank you! Your submission has been received!
Oops! Something went wrong while submitting the form.
×