AN OVERVIEW OF ALGORAND (ALGO) 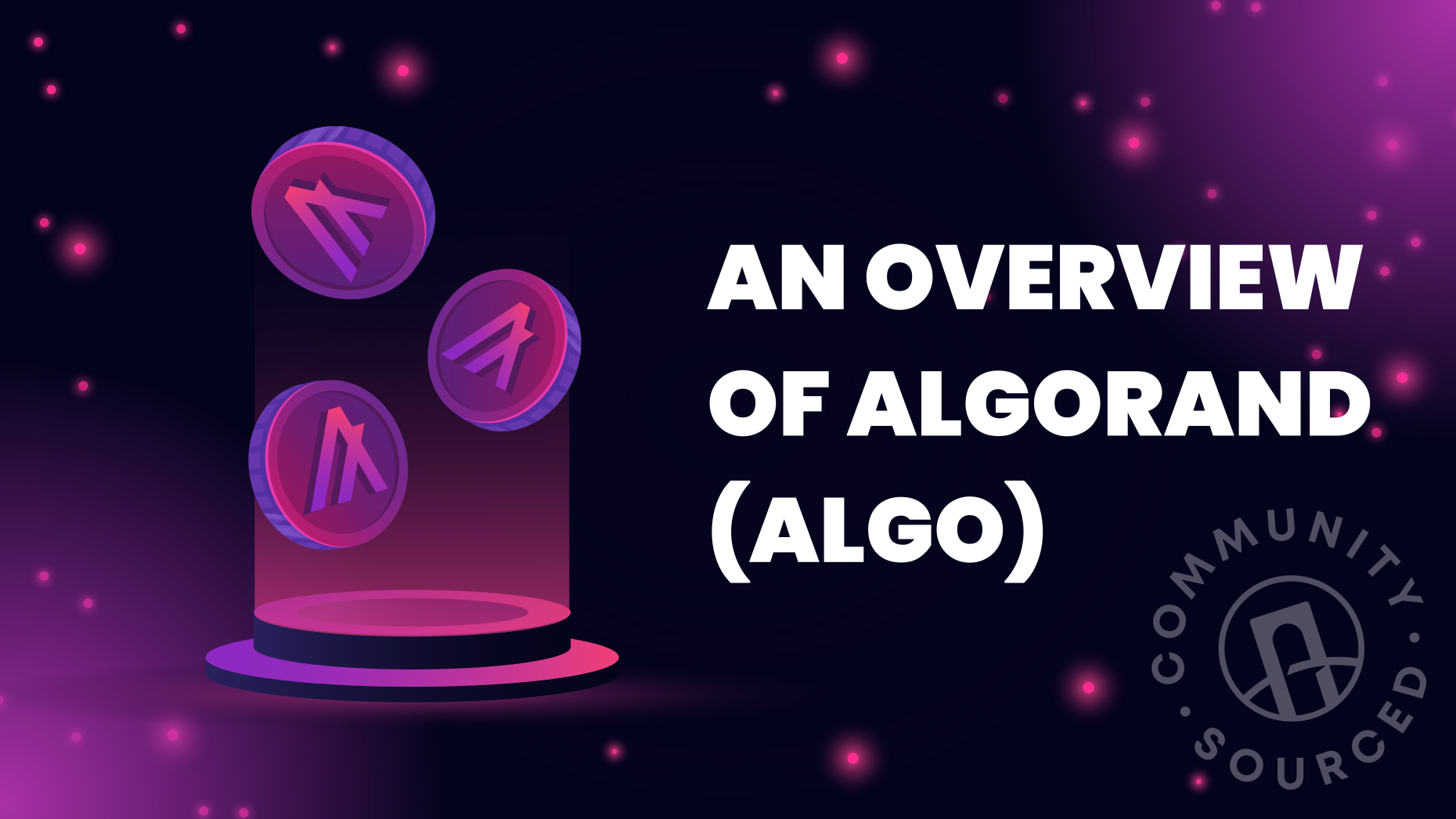 Algorand is a pure-proof-of-stake (PPoS) based decentralized, permissionless blockchain that intends to facilitate a borderless economy based on blockchain technology.

The long transaction durations of Bitcoin and other blockchains led to the invention of Algorand, which sped up transactions and increased efficiency.

Algorand aims to promote the development of fast and scalable decentralized applications while sticking to the principles of decentralization. Its native currency ALGO is used to secure the network, and reward stakeholders in the Network. As of the time of writing, ALGO had a market value of over 2.065 billion US dollars and was trading at $0.2986, representing a drop of roughly 89.88% from its all-time high in June 2019 when it traded for $2.9428.

The Algorand blockchain is exceptionally fast as it is capable of completing 6,000 transactions in one second thanks to a recent upgrade that also promotes State Proofs – an interoperability standard that enables trustless cross-chain communication.

The block pipelining procedure is anticipated to boost Algorand's performance to 45,000 TPS. Thus, putting it in the same category of extra-fast, next-gen solutions like Aptos, which also has subsecond finality.

OVERVIEW AND HISTORY OF ALGORAND

Silvio Micali, an Italian computer scientist, a pioneer in cryptography, and a professor at the Massachusetts Institute of Technology (MIT), collaborated with a group of top-tier researchers to create the Algorand protocol in 2017.

In addition to earning his Ph.D. in computer science from the University of California, Berkeley, Micali also holds a Laurea in mathematics from the University of Rome. Micali's research is focused on cryptography, pseudorandom generation, blockchain, and information security. The foundational protocols of contemporary cryptography, such as verifiable random functions, zero-knowledge proofs, and probabilistic encryption, were co-invented by Silvio. He is a laureate of the RSA Prize (in cryptography), the Gödel Prize (in theoretical computer science), and the Turing Award (in computer science).

Micali co-authored the Algorand white paper with Jing Chen, a Stony Brook University associate professor of computer science and his Ph.D. student. Chen currently serves as the head of theory research, and chief scientist at Algorand.

Micali, Cheng, and other Internationally renowned scientists, mathematicians, economists, cryptographers, and seasoned executives from major technological firms came together to establish the Algorand Foundation. The Algorand Foundation is in charge of overseeing the development of the Algorand ecosystem, as well as the ecosystem's growth, on-chain governance, and decentralization within the Algorand network.

In February 2018, Algorand announced a  $4M seed funding from Pillar and Union Square Ventures, in October of the same year, they secured about $62M in funding from a broad global investment group. Algorand's public testnet went live in April 2019, soon after, its mainnet got launched in June of the same year. The initial coin offering (ICO) for Algorand took place in June 2019 at a token price of $2.4.

As at the time of writing, Algorand had a total value locked of about $268,026,379, and over 27,000,000 unique addresses. These metrics indicate that the Algorand network has enjoyed positive acceptance, aided by its continual network growth, and dynamic community.

The Algorand blockchain is forkless by design and prides itself as the world's first carbon-negative blockchain. Given that Algorand is environmentally friendly and has never suffered a downtime since its launch, the network is quickly emerging as the protocol of choice for many businesses wishing to enter the cryptocurrency and blockchain domain.

HOW DOES ALGORAND WORK?

The pure-proof-of-stake (PPoS) protocol used by Algorand is based on Byzantine agreement and is the key to Algorand's scalability as it enables rapid processing of a large number of transactions without compromising decentralization.

In order to boost the security of the blockchain network, the pure-proof-of-stake consensus method incorporates randomization. To submit blocks and cast votes on proposed blocks, users are chosen privately and at random. Every online user has the opportunity to be chosen to vote and make a proposal. Nevertheless, the stake of a user directly affects both the chance that it will be selected and the importance of its suggestions and votes.

Verifiable Random Function (VRF) supports the Algorand protocol's self-selection mechanism, allowing users to covertly ascertain whether they have been chosen to take part in the consensus protocol round or not.  Anyone wishing to independently check the outcomes of the VRF operations can do so thanks to the cryptographic proof that is produced.

The Algorand Standard Assets (ASA) protocol is the token standard for building and deploying assets on Algorand. The design of ASAs emphasizes simplicity and makes it possible for anybody to utilize them, regardless of their technical know-how.

WHAT CAN YOU USE ALGO FOR?

ALGO is the native token of the Algorand blockchain, and it is used to secure the network, pay transaction fees, and reward network consensus participants as block validators are compensated with ALGO.

Holders of ALGO can also stake their tokens and participate in protocol governance by voting on upgrades and modifications to receive a portion of ALGO tokens as a reward.

DeFi dApps can run at enormous scale, with little transaction costs, and with a very small carbon footprint thanks to the Algorand blockchain.

Algorand, like many other blockchain initiatives that have surfaced in recent years, aims to address the scalability issue that has long hindered the mass adoption of blockchain technology.

One of the major issues facing the blockchain industry is finding the ideal mix between security, decentralization, and scalability, which is what Algorand claims to have achieved. Cutting-edge solutions such as Aptos provide sustainable solutions to these issues and redefine the standard as related to speed, security, scalability, cost, reliability, and accessibility.

The Aptos blockchain is already outperforming expectations while still being in the testnet phase, as it charges near zeros fees and handles about 160,000 transactions per second with sub-second finality.

Pontem is developing the infrastructure and decentralized tools necessary for the adoption of the Aptos blockchain. With the ability to send and receive tokens, connect to decentralized apps, and leverage the power of the safest and most scalable blockchain, its wallet acts as the entry point to the Aptos ecosystem.