AN OVERVIEW OF FANTOM (FTM) 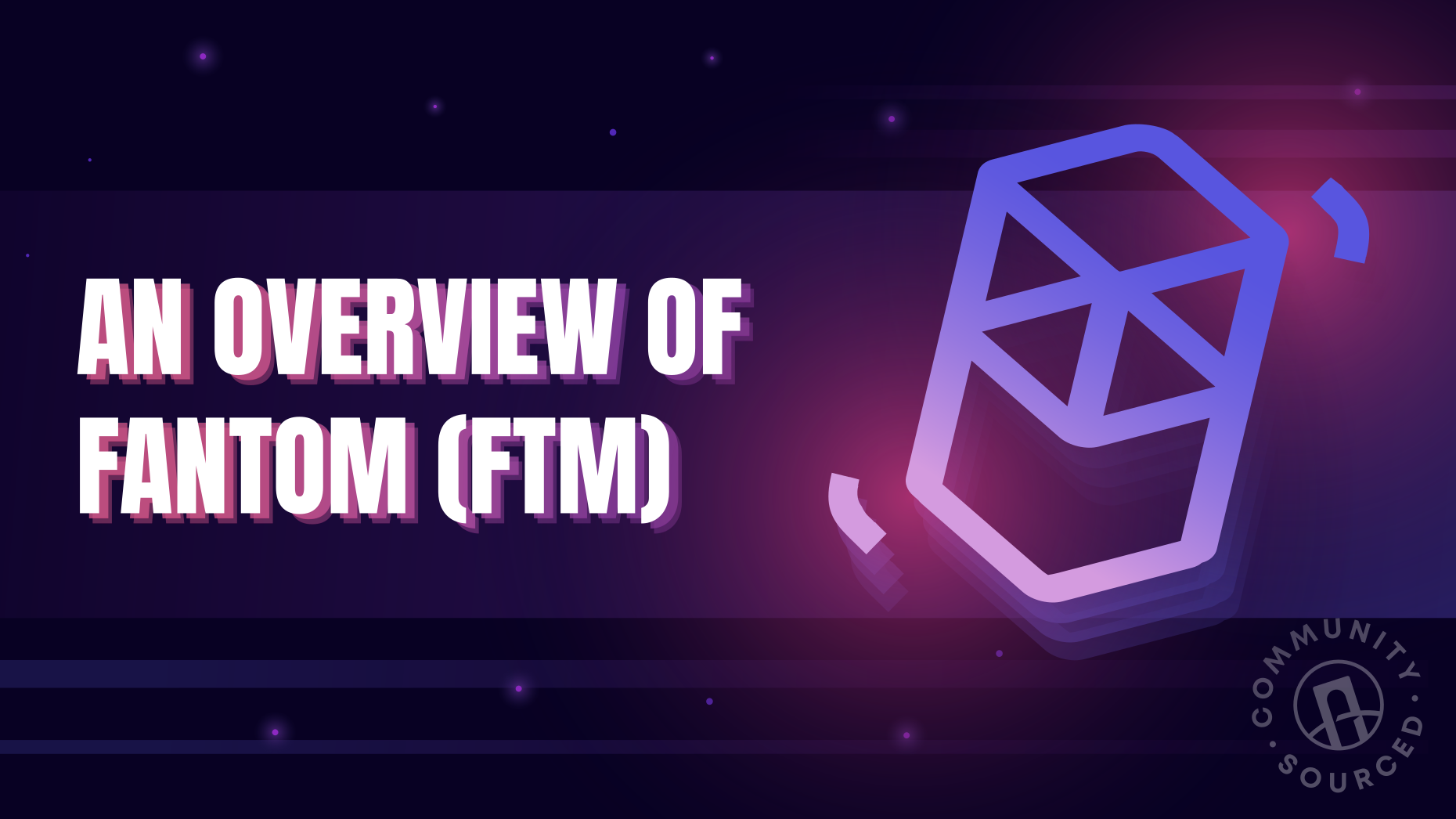 Fantom is an open-source layer-one blockchain that facilitates the creation of decentralized applications. Lachesis, its high-speed consensus algorithm, enables digital assets to work at an unparalleled speed and brings about significant advantages. In this article, we discuss Fantom and explain how it provides an alternative to Ethereum.

The three primary issues that developers presently face – speed, affordability, and security - are the emphasis of the Fantom platform.

The network's token, FTM, is used for network administration, staking, and paying costs associated with putting apps on the blockchain. As of the time of writing, FTM had a market value of over 689.269 million US dollars and was trading at $0.2763, representing a drop of roughly 91.78% from its all-time high in January 2022 when it traded for $3.3108.

The creators of Fantom believe they have found a solution to the issue of scaling blockchains without sacrificing other crucial characteristics of the networks, such as decentralization and security, as traffic and congestion have no impact on its performance or stability.

Fantom also boasts of a modular architecture that makes it highly customizable. Hence, Ethereum-based dApps can be ported easily to the Fantom Opera mainnet.

OVERVIEW AND HISTORY OF FANTOM

In 2019, Dr. Ahn departed Fantom and since then the Fantom Foundation,  a non-profit organization based in the Cayman Islands oversees the development of the Fantom network. The Fantom Foundation is committed to creating the framework for a future that is more democratic and effective. Its team is composed of Engineers, scientists, researchers, designers, and business owners that share the same goal. Mr. Michael Kong, a seasoned software developer with experience building Ethereum-based smart contracts, serves as the CEO and CIO of the Fantom Foundation at the moment.

Fantom launched its mainnet in December 2019 after months of careful preparation and research. The initial coin offering for its native token – FTM took place in June 2018, and Fantom raised $369.65 million by selling 40% of the 3.175 billion tokens that were available.

The project's initial layer, Opera Chain, was constructed in December 2019 and supports the Ethereum Virtual Machine, thus establishing  FTM as an ERC-20 token standard. Fantom announced its integration with the Binance Chain in the second quarter of 2019, and as a result, FTM was made accessible as a BEP-2 token. Fantom's incorporation into the Ethereum and Binance Chain opens up the possibility of a more enhanced and interoperable ecosystem.

The Fantom Foundation announced In January 2022 that the network had reached 1.5 million unique addresses. Since then, the blockchain has expanded further. As at the time of writing, there are more than 3.48 million distinct addresses.

Andre Cronje, a well-known DeFi developer and the creator of numerous influential DeFi projects, was a key figure in the development of the Fantom Foundation and the DeFi ecosystem. Fantom eclipsed Binance Smart Chain (BSC) to become the third-largest chain with more than $12.2 billion in total value locked (TVL) when he revealed that he will launch a project called Solidly on it. However, Andre and Anton Nell, a colleague of his at the Fantom Foundation, revealed in March 2022 that they would be permanently leaving DeFi, and this caused Fantom's TVL to plummet rapidly.

HOW DOES FANTOM WORK?

Fantom employs its own consensus method dubbed Lachesis in place of the proof-of-work (PoW) techniques for consensus used in Bitcoin and Ethereum.

Lachesis is an aBFT (asynchronous Byzantine Fault Tolerant) consensus technique that makes use of Directed Acyclic Graph (DAG) technology. To determine the ultimate sequence of events, a local DAG is kept on each node of the network.

One of the main advantages of Lachesis over Practical Byzantine Fault Tolerant (pBFT) consensus systems is that it is supposed to be resistant to Distributed Denial of Service (DDoS) assaults. Furthermore, compared to consensus methods based on pBFT, aBFT systems are designed to have lower latency.

Unlike other blockchain systems, the blocks themselves are not compared when comparing transaction events contained in blocks with other nodes on the network. Also, any network user can run a node to become a validator on the Opera chain. The opera mainnet is completely leaderless, in contrast to normal PoS models where validators have the last word about the confirmation of transactions. Hence by eliminating leaders, Fantom greatly increases network security.

WHAT CAN I USE FTM FOR?

The entire Fantom ecosystem is powered by the Network's native utility token FTM. FTM coins are used to pay transaction and smart contract execution fees on Fantom's mainnet – Opera. They may also be used to vote on-chain on Fantom's governance issues and to protect the network using Opera's Proof-of-Stake (PoS) consensus.

Network validators must stake at least 500,000 FTM to run a node, to receive a proportionate share of the staking benefits. Users that don't operate a node can also transfer their tokens to an active validator to receive a share of network fees and staking rewards. The amount a validator has staked plus whatever delegations they have received determines their voting power.

Fantom has a quirky ‘ghost’ theme that is fun and creative. It surely plays a role in attracting many users. Decentralized applications on Fantom such as SpookySwap, Geist Finance, SpiritSwap, Tomb finance, and Beethoven X also portray supernatural and spooky characters: ghosts, skeletons, magicians, etc.

Fantom supports a considerable number of decentralized applications. The top 10 DeFi projects by TVL, according to DefiLlama, reflect the ecosystem's variety. It contains both protocols that are native to Fantom and those that have been ported from Ethereum to Fantom.

The ranking of the leading decentralized applications on Fantom can be seen here.

Some of the most popular decentralized applications in the Fantom ecosystem are:

SpookySwap is the first native decentralized exchange, in the Fantom ecosystem. The exchange is run by the community and offers a large selection of FTM farms that let users earn its native governance token – BOO in return for providing liquidity.

SpookySwap also has the lowest exchange fees in the Fantom ecosystem, and the xBOO reward, which generates interest as a percentage of the 0.2% swap charge, may be generated by staking the BOO token on the platform.

Curve is an automated market maker (AMM) on Fantom. In comparison to other AMM DEXs, Curve focuses solely on stablecoins and presently provides DAI, fUSDT, USDC, renBTC, and wBTC pools on Fantom.

The user experience is elevated on Fantom by quick order execution, insignificant slippage, and almost no expenses. Its native token CRV is used for governance and is granted to users based on liquidity commitment and length of ownership.

Beefy is a decentralized multi-chain yield optimizer that enables users to earn compound interest on cryptocurrency assets. Hence, users of Fantom can invest in an ever-increasing variety of "vaults" offered by Beefy.

Its multipurpose token BIFI grants holders the right to vote on crucial governance issues. More so, holders of BIFI  receive a portion of Beefy's earnings as compensation.

The automated portfolio management of Fantom tokens is powered by Beethoven X, a decentralized exchange, liquidity provider, and price sensor that offers its users a cost-free automatically rebalancing index fund by utilizing the Balancer V2 Protocol.

With the help of decentralized governance made possible by its native token – BEETs, users may shape the development of the protocol and ensure their voices are heard in key decisions that affect Beethoven X's future.

AAVE, one of the biggest DeFi protocols, serves as the foundation for Geist Finance, a lending and borrowing market on Fantom.

Geist connects lenders and borrowers through a liquidity pool as opposed to the traditional peer-to-peer system. The native cryptocurrency of the platform, GEIST, is not a governance token, but a reward-sharing token instead. As the platform rewards its users in GEIST in order to maintain attractive returns for them.

Additionally, Geist lacks a treasury. However, it gives GEIST investors a direct cut of 50% of all loan proceeds.

Fantom is able to establish itself as a leading hub for DeFi products thanks to the technological innovation provided by its Lachesis consensus algorithm and the Fantom Foundation's focus on advancing Solidity development through the Fantom Virtual Machine.

However, worries about the Ethereum blockchain increased network congestion requests for more scalable options. Irrespective of the fact that scalability difficulties may be solved by layer two solutions, it is important that layer one implementations are enhanced.

As we anticipate the Ethereum merge which promises to address its scalability challenges, it is pertinent that we pay attention to other next-gen layer one solutions like Aptos, which addresses these lingering challenges.

Although it is still in the testnet phase, Aptos is cheaper, faster, more secure, and more scalable than other contemporary layer one blockchains, as it incurs near-zero fees and is able to complete up to 160,000 transactions in one second, with sub-second finality.

Pontem is developing the infrastructure and decentralized tools necessary for the adoption of the Aptos blockchain.  The Pontem wallet is the doorway to the Aptos ecosystem and it is available as a chrome extension.

Users of the Pontem wallet will be able to send and receive tokens, connect to decentralized applications, and explore the Aptos ecosystem with ease.