AN OVERVIEW OF METER (MTR) 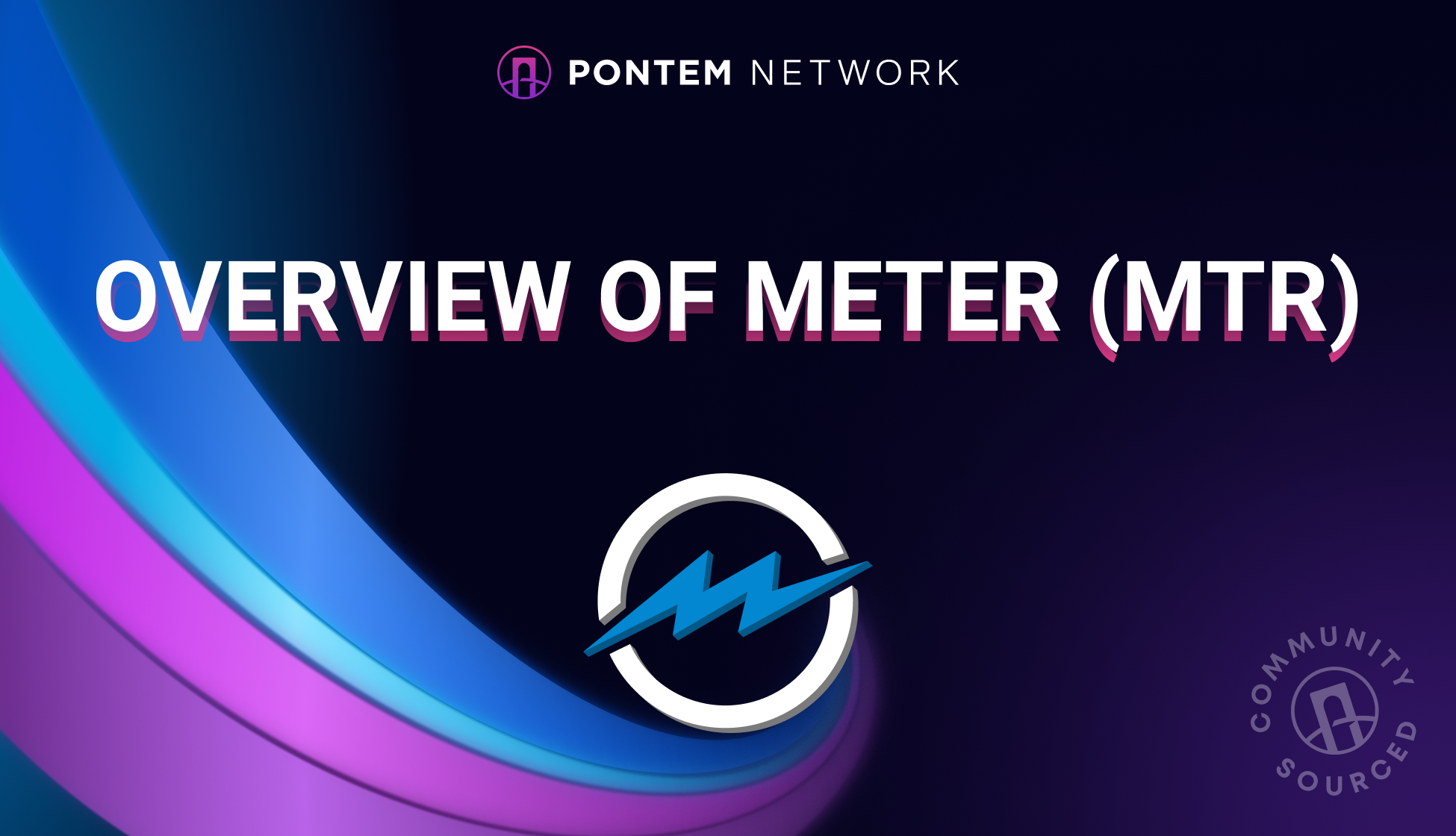 Meter ($MTR) is a high-performance EVM-Compatible sidechain for Ethereum and other public blockchains that facilitates the development of fast, decentralized, and scalable DeFi apps. In this article, we’ll discuss how Meter addresses the issues with interoperability and scaling of public blockchains.

Meter is a scalable, EMV-compatible Sidechain that employs an ingenious Proof of Value (PoV) consensus mechanism – a hybrid of Proof of Work (PoW) and Proof of Stake (PoS) – to facilitate scalability and blockchain interoperability.

Meter's hybrid consensus technique which ensures its security, also allows the system to handle thousands of transactions per second and reach finality almost immediately. Hence it falls in the same category with next-gen solutions such as Aptos which is capable of handling about 160,000 transactions per second with sub-second finality.

ABOUT THE METER TOKENS

Meter utilizes Proof-of-Work (PoW) to create metastable MTR which can be used to pay for fees and other payments in the network. As of the time of writing, MTR  was trading at $1.17, representing a drop of roughly 73.10% from its all-time high in April 2022 when it traded for $4.4112.

A competitive bidding method may be used to convert MTR to MTRG. MTR's supply is uncapped because in times of strong demand, miners will increase supply, and in times of low demand, the internal MTRG auction process will continuously remove MTR from circulation, thereby reducing its supply. Because of this, MTR's value is neither deflationary or inflationary.

Meter uses HotStuff-based Proof-of-Stake (PoS) consensus with the Meter Governance Token (MTRG) which is used to validate transactions and secure the blockchain. As of the time of writing, MTRG had a market valuation of $62.337 million and was trading at $3.77, representing a drop of roughly 67.80% from its all-time high in November 2021 when it traded for $11.77.

OVERVIEW AND HISTORY OF METER

Meter was founded in 2018 by Xiaohan Zhu.

Xiaohan was born in China and studied electronics engineering at Tsinghua University before he migrated to the United States to attend graduate school at UC San Diego. He later earned his MBA at The Wharton School before working at Microsoft, CoWare, Sony, Motorola, and Huawei Technologies where he gathered administrative experience in marketing, strategy, product management, and engineering.

Xiaohan then served as the Managing Director of JD Capital, a leading private equity firm in China before he launched ZMT Capital in 2016 and began investing in ICOs and blockchain technology. Xiaohan then launched Meter.io in 2018 to solve the issues facing DeFi.

Soon after its launch, Meter received institutional funding from Pantera, DHVC, GBIC, and other notable VCs. In September 2019, Meter launched its first testnet, which enabled MTR token mining. Its mainnet was then released in July 2020, allowing users to mine MTR tokens. Nevertheless, the foundation continued to manage the validation nodes on the PoS network.

In July 2020, the project's community round attracted investments from DTC Capital, LD Capital, and AU21. In September 2020, Meter began to allow public validation and launched the staking of its governance token MTRG on the network. In May 2021, Meter released Meter Passport, a multi-blockchain router that facilitates the transfer of assets and information from one blockchain to another.

As at the time of writing, Meter had completed over 8 million transactions, and its MTR and MTRG tokens had a combined total circulation of over 16 million with a 46.96% staking ratio.

HOW DOES METER WORK?

Meter uses a hybrid dual chain architecture as all accounts and transactions are maintained on the HotStuff-based PoS Chain, while the PoW chain is used to create the metastable MTR token. At the conclusion of each epoch, the two chains synchronize. Meter is quick, safe, and vastly decentralized thanks to this hybrid strategy.

Separate chains are maintained by the Proof-of-Work miners and Proof-of-Stake validators. Nevertheless, the two chains interact with each other at the conclusion of each epoch to cross-reference one another.

A committee will be formed at the start of each epoch by a selection of validators at random from the validator pool. In accordance with a BFT-style consensus, only the validators on the committee are permitted to produce and vote on blocks during the epoch. Thereby ensuring high performance and immediate finality.

HOW TO USE THE METER PASSPORT TO MOVE ASSETS ACROSS CHAINS

Meter Passport enables smart contracts to move assets and interact with one another across different blockchains.

The Meter Passport is easy to use, as users do not require any technical skill to move their assets across various chains. To get started, click on this link, and you will be directed to the Meter passport dApp that looks like this:

You will be prompted to connect your wallet to continue. Once you have connected your wallet, you can now choose the network you want to move your assets from by clicking on the change button.

Next, select the asset and input the amount you want to bridge. Now choose the network you'd like to send the assets to, and check the "I want to send funds to my address box" to get reduced gas fees and airdrops.

After all is done, click on the "Start transfer" button to move your tokens. You will receive a pop-up promoting you to allow Meter to access the token you want to bridge.

Congratulations, you have successfully moved your tokens. Whenever you bridge an asset into Meter, you should instantly receive a 0.3 MTR airdrop in your wallet.

If you need more clarification, here is a link to a video tutorial on how to use Meter Passport.

A lack of scalability and tradeoffs between efficiency, security, and accessibility are long-standing issues that have limited the widespread acceptance of blockchain technology. While sidechains like Meter tackle these issues by acting as a bridge to other blockchains, Next-gen solutions like Aptos are dedicated to tackling these issues from the source by building the safest and most scalable layer one blockchain which will be easily accessible to everyone.

Although Aptos is currently in the testnet phase, it already outperforms most contemporary layer one blockchains in terms of speed, cost, security, and scalability.