AN OVERVIEW OF NEAR PROTOCOL 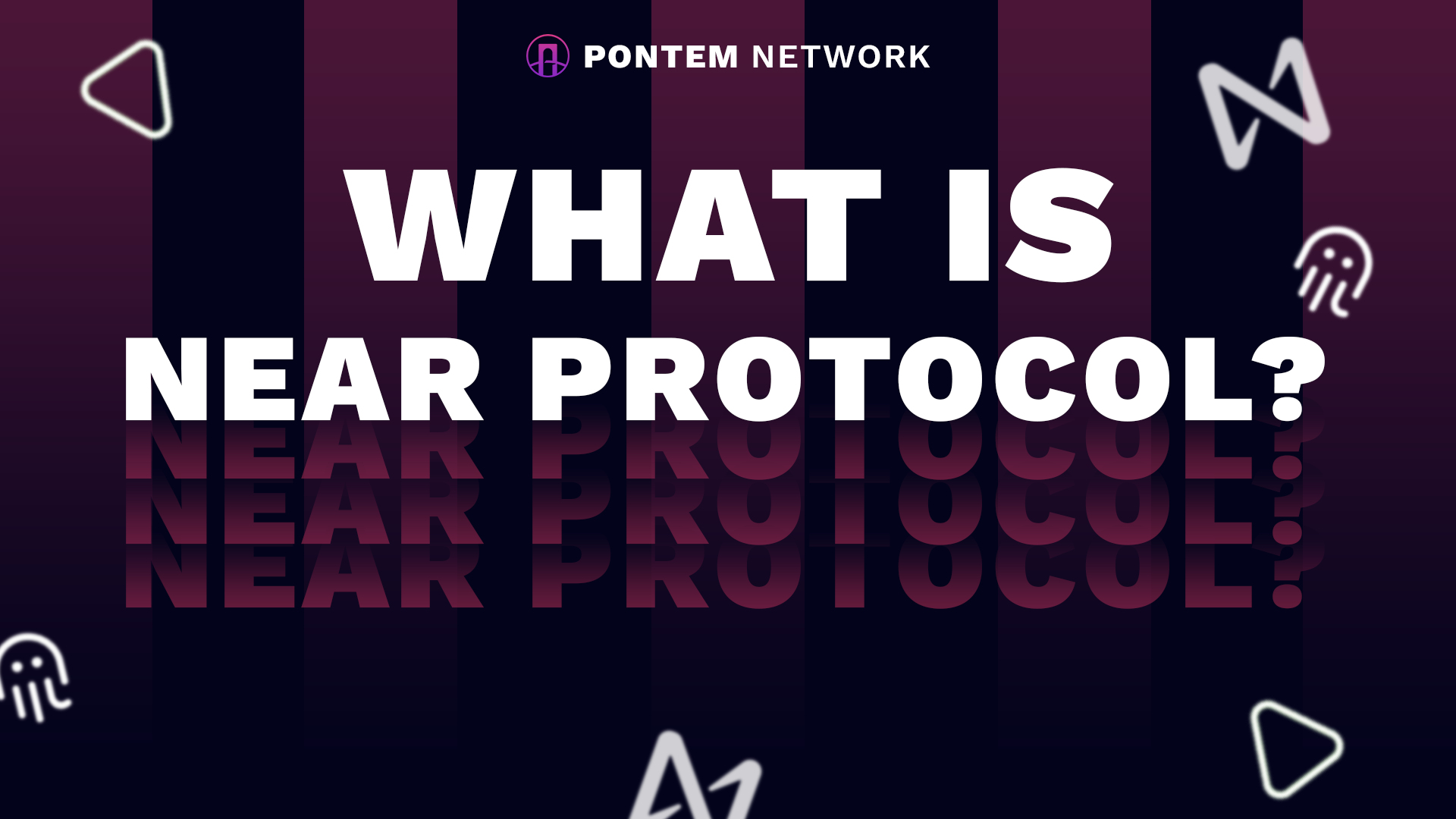 NEAR is a highly scalable layer one blockchain that is simple to use and has no impact on the environment.  It was designed to be an extremely fast, safe, and easily accessible decentralized application (dApp) platform for everyone. In this article, we examine the NEAR protocol and see how sharding technology helps it attain indefinite scalability.

WHAT IS NEAR PROTOCOL?

NEAR Protocol is a high-performance, smart contract-enabled, sharded Layer 1 blockchain that was built to be incredibly fast, secure and scalable.

The goal of NEAR Protocol is to provide a platform that is both user and developer friendly. To fulfill this aim, NEAR has included features like the ability for users to connect with decentralized applications (dApps) and smart contracts, as well as the option to create human-readable account names rather than just cryptographic wallet addresses.

Its native token, NEAR, is used to pay transaction fees and secure the network among other use cases. As at the time of writing, NEAR had a market capitalization of about 3.273 billion US dollars and was trading at $4.20 which indicates a decrease of about 79.452% from its all-time high in January 2022 ($20.42).

NEAR has the ability to complete transactions instantly and at speeds of up to 100,000 transactions per second (TPS). As a result, NEAR belongs to the same class of ultra-rapid, next-generation solutions such as Aptos, which possesses subsecond finality.

By offering rapid transaction speeds, top-notch security, cheaper gas fees, and increased interoperability through the notion of sharding and a novel delegated proof-of-stake (DPoS) consensus mechanism named DoomSlug, the NEAR protocol aims to provide the perfect environment for the creation of decentralized applications.

OVERVIEW AND HISTORY OF NEAR PROTOCOL

NEAR Protocol is the invention of Illia Polosukhin and Alexander Skidanov. Skidanov worked as a software developer for Microsoft before taking a director of engineering position at MemSQL. At Google's research facility, Polosukhin worked as an engineering manager and contributed to the creation of natural language algorithms for Google Translate. Polosukhin also contributed to the development of Google TensorFlow (SKFlow) for machine learning.

The duo founded NEAR in 2017 which was originally intended to be a machine learning platform named NEAR.ai. NEAR.ai was aimed at exploring program synthesis, which is the notion that if humans tell computers what tasks they want to accomplish, they would develop programs on their own to solve them.

During the course of their work on program synthesis, they stumbled upon programmable smart contracts and cryptocurrencies and they were intrigued by their discoveries and decided to learn more about cryptography and blockchain-related technologies.

In August 2018, Illia and Skidanov assembled a group of engineers and formally began developing the NEAR Protocol. Before they broke ground, NEAR Protocol garnered $50 million in the first four months. Despite the bear market.

The NEAR platform's goal was to give developers a simple way to create decentralized applications that could scale for widespread use. NEAR implemented a Proof-of-Stake (PoS) method to handle transaction verification and block generation to accomplish these objectives.

After a year of rigorous testing, It's mainnet launched in April 2020. NEAR protocol secured $21.6 million in a fundraising round headed by Andreessen Horowitz in May 2020. Pantera Capital, Distributed Global, and Blockchange, among many others, attended the fundraiser to commemorate the early launch of the NEAR protocol's mainnet.

With the help of the capital from the fundraiser, the NEAR community was given control over how the network is run, and tokens were distributed to encourage global investors and developers. In October 2020, network validators opted to permit token transfers.

The Rainbow bridge, which serves as NEAR's connection to Ethereum, went live in March 2021. Soon after, the launch of Aurora, which enables the deployment of Ethereum-based smart contracts on NEAR so that they may take advantage of the NEAR protocol's incredibly cheap gas costs and quick transaction speeds was announced in May 2021.

In April 2022, Tiger Global, a hedge firm, spearheaded a $350 million fundraising round for NEAR protocol. To hasten the decentralization of the NEAR ecology. Among the participants in this investment were Dragonfly Capital, Republic Capital, and FTX Ventures.

HOW DOES NEAR PROTOCOL WORK?

The NEAR protocol was created as a community-run cloud computing platform with the capacity to host decentralized apps and establish smart contracts. NEAR employs both horizontal scaling and a brand-new consensus technique.

In order to increase efficiency, NEAR includes a revolutionary consensus technique called Doomslug. This method ensures that blocks reach finality in a matter of seconds by requiring validators to produce blocks alternately.

NEAR also employs the Thresholded Proof of Stake (TPoS) mechanism to reach consensus among the network's nodes. To be eligible to participate, nodes who want to function as transaction validators must stake NEAR tokens.

Owners of tokens who do not wish to run a node may assign their stake to any validator of their choosing. Every epoch (approximately every 12 hours), validators are selected by NEAR via an auction. The minimal requirement for becoming a validator in each epoch will thereafter be determined by TPoS. Those who stake more than that amount will have a chance to be chosen as validators in proportion to their stake size.

To boost the network's processing capability NEAR integrates several characteristics into its ecosystem encompassing the following:

The NEAR Protocol utilizes a sharding technique known as "Nightshade" which allows each participating node to retain a small amount of data on the network. Thus enabling it to expand more efficiently, and facilitating more transactions per second at lower transaction costs.

Block producers and validators are used by Nightshade on NEAR to process transaction data concurrently over several shards. Each shard contributes a portion to the upcoming block. The transactions included in these fractions are then processed and recorded on the NEAR Protocol blockchain.

In terms of its design or "state," Nightshade shifts NEAR from a single chain blockchain to a sharded one, but not in terms of validator duties. That implies that everyone who qualifies as a validator will continue to jointly verify all transactions.

Aurora is a layer-2 solution built on the NEAR Protocol blockchain. With reduced transaction fees for consumers, it intends to assist developers in extending their apps on an Ethereum-compatible platform. NEAR claims that Aurora can support thousands of transactions per second with under 2 seconds of block confirmation time.

Aurora is made up of two components: the Aurora Engine and the Aurora Bridge. Aurora Engine is a component of the Ethereum ecosystem and works with all of its tools since it is an Ethereum Virtual Machine (EVM) operating on the NEAR Protocol. As a result, in order to get started on NEAR, developers no longer need to recreate their dApps or learn how to utilize new development tools.

Rainbow Bridge is a NEAR plugin that allows users to transfer ERC-20 tokens, stablecoins, wrapped tokens, and even NFTs across the Ethereum and NEAR blockchains. As a result, users and developers may benefit from the NEAR Protocol's increased throughput and cheaper costs.

The Rainbow Bridge is completely decentralized and permissionless. Users may immediately transmit ERC-20 assets from MetaMask or other Web3 wallets to their NEAR Wallet and vice versa.

Transactions on NEAR often get confirmed within 2 seconds and cost less than a dollar. However, the process may cost more and take longer to complete if the user wants to shift the token back to Ethereum. The exact pricing will be determined by the gas costs and Ethereum traffic at the time.

WHAT CAN I USE NEAR FOR?

The NEAR ecosystem's primary method of exchange and fundamental unit of value is its native token NEAR.

The NEAR token can be used by holders to pay network fees. The network automatically collects and burns these payments.

By staking their tokens in exchange for NEAR payouts, NEAR token owners also help to secure the network.

HOW DOES NEAR COMPARE TO ETHEREUM?

The fact that NEAR is a sharded platform is its main advantage as it addresses the scalability issues that characterize most of its predecessors such as Ethereum and Bitcoin. As a result, NEAR is faster and more cost-efficient than Ethereum.

NEAR has no impact on the environment because it is a blockchain that relies on a proof of stake consensus mechanism. Ethereum on the other hand utilizes a proof-of-work consensus technique, which is not environmentally friendly. However, the Ethereum network is gradually implementing the proof of stake mechanism.

(Read up on consensus mechanisms here).

Platforms that can provide high throughput and low transaction costs will undoubtedly play a significant role in the general acceptance of blockchain-related technologies.

Developers seeking to create more effective DeFi products and decentralized applications will be able to surmount the limitations of scalability and cost by utilizing solutions offered by next-gen layer one blockchains such as NEAR and Aptos.

Aptos is a new Layer 1 blockchain that is faster, more secure, and more scalable than other blockchains. Aptos is able to complete up to 160,000 transactions in one second, has sub-second finality, and incurs almost no fees.

In Q3 of 2022, Aptos will deploy their mainnet. The blockchain is now undergoing extensive testing to make sure it is the most efficient network available to consumers, and several testnets packed with incentives are a significant part of that process.

Pontem is in a good position to create the first products for the Aptos blockchain and to progress this innovative ecosystem by creating the decentralized apps required for billions of people to use it.

Pontem Network is a product studio building the first-ever suite of foundational dApps for Aptos. It includes Pontem Wallet, the first wallet for Aptos. Download it from the Chrome Web Store: https://chrome.google.com/webstore/detail/pontem-aptos-wallet/phkbamefinggmakgklpkljjmgibohnba