Aptos: Building the most secure and scalable Layer 1 blockchain. 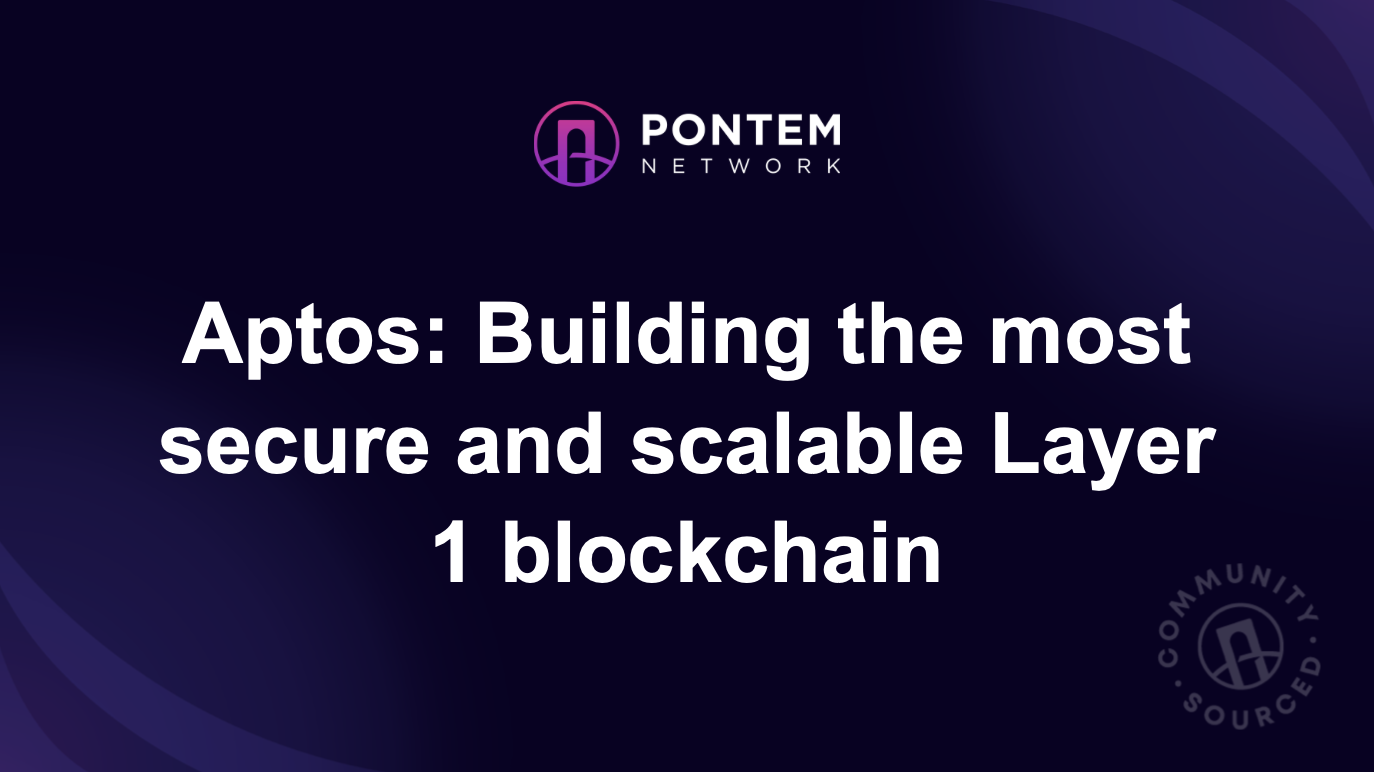 Aptos is a fast-rising, autonomous project that is focused on building the most secure and scalable Layer 1 blockchain.

Aptos was designed to tackle the issues that have long beset its existing Layer 1 predecessors such as Ethereum Solana and Polkadot who have long toiled with complex challenges that are impeding widespread acceptance. These issues include; a lack of scalability, and tradeoffs between efficiency, security, and accessibility.

To address the distinct tradeoffs that current smart contract systems face, Aptos presents a framework for a fluidly flexible and quickly developing blockchain. With its focus on absolute security, scalable extensibility, and plausible impartiality, Aptos was created to address these issues and is committed to providing a sizable global user base with the safest and most accessible blockchain to enable billions of people worldwide to have equitable and widespread access to decentralized assets.

Overview and History of Aptos

The story of Aptos can be traced back to Meta (formerly Facebook) where the core team of the Aptos Project were former employees and spearheaded the development of diem (formerly Libra).

After working with some of the smartest technologists in the world, the Aptos founding team left Meta to begin creating a completely new network from scratch to realize their goal of building the most secured and most scalable Layer 1 blockchain in the industry.

A portion of Aptos is based on open-source technology that has been created publicly since Diem's onset. The Aptos technology stack was built for more than three years, beginning in 2019, by a group of more than 30 renowned professionals in their disciplines; researchers, engineers, and cryptographers.

Since then, 292 different developers have contributed to the growth of Aptos' open-source codebase. Enterprise operators have authenticated  Aptos in a production environment while modeling various use cases and potentially catastrophic situations.

How does Aptos work?

The construction of a fast-evolving blockchain that can smoothly incorporate the most recent technology developments is a crucial step in granting people all over the world equitable and widespread access to decentralized assets as well as the Web3 ecosystem.

The decentralized foundation for a secure, scalable, and upgradeable Web3 environment that Aptos uses is built in the Diem Blockchain programming language Move.

Move is a secure, adaptable, and executable bytecode language. Unique transactions and smart contracts may be implemented using Move. Move's primary feature is its ability to construct custom resource types with semantics derived from linear logic.

With lesser gas expenses than Ethereum, this approach was created to maximize safety without raising the cost of transaction compilation.

Move makes the execution of the transactions on the Aptos blockchain retain the following indispensable attributes:

The outcome of deterministic transaction execution is entirely predictable.

The results of a transaction's execution are solely dependent on the data it contains and the state of the ledge at the time it is executed.

At the level of transaction execution, metering serves as a crucial protection mechanism against DoS (Denial of Service) assaults.

As a direct effect of Atop’s high throughput blockchain, developers using Aptos have the free advantage of an extremely swift execution time on a limited number of cores for free which results in minimal transaction costs for users.

To synchronize validators faster than waiting for growing timeouts, an active pacemaker is introduced to the BFT protocol.

New blocks are being added to the chain using the most recent BFT protocol implementation in as little as two network round trips. Due to the consensus protocol, sub-second finality is now the norm in the network.

The introduction of significant advancements at the blockchain level to provide greater security and scalability, among other things, is necessary for the continued growth of the web3 ecosystem. The goal of Aptos is to implement these innovations.

As compared to other blockchains, Aptos stands out in the following ways:

Aptos has been able to achieve speeds of 130,000 TPS and has the potential for speeds of 160,000 TPS thanks to parallel execution and other technologies. Even more crucially, the network has sub-second finality, which means that it takes less than a second for a transaction to be fully confirmed.

Therefore it is safe to state that Aptos has a significant edge over its peers. Also, speed and safety together may encourage widespread user adoption.

Aptos nodes, which are components of the Aptos ecosystem, monitor the state of the Aptos blockchain. Independent node operators located all over the world manage and operate nodes. Clients communicate with Aptos nodes to access the blockchain.

By handling validator configuration and administration using an on-chain state, the network may be upgraded seamlessly. Unlike other blockchains, Aptos does not need node operators to download a chain of blocks to reach the most recent block.

For all sorts of nodes, Aptos offers quick and adaptable state management assistance. The node types include:

What has Aptos accomplished so far?

Aptos completed a $200 million investment round in March 2022 that was organized by Andreessen Horowitz, Three Arrows Capital, BlockTower Capital, and several other investors.

Google Cloud and Aptos Labs teamed up in April 2022 to make it easier for enterprises and developers to build on the Aptos network.

On the scalable, secure, and sustainable infrastructure provided by Google Cloud, Aptos developers can build and expand their applications. Developers will be able to install nodes in as little as 15 minutes

Additionally, Aptos has collaborated with BNB Chain to provide Aptos support for BUSD and cross-chain functionalities.

What does the future hold for Aptos?

It is anticipated that the incentive-driven testnet stage would run through August 2022 and that a mainnet will launch soon after.

Aptos Incentivized Testnet 2 (AIT-2) hasn't even been around for a few weeks, and AIT-1 has just ended.

To ensure that the Aptos community's registration for AIT-2, which started on the 30th of June, goes without a hitch, the team has been working diligently to prepare significant changes. To find out more check out this article.

The technological foundation of Aptos enables its network to offer the most secure and production-ready blockchain that can scale without interruption. This implies that the degree of reliability and scalability of current blockchains and smart contract technologies will be drastically enhanced by Aptos.

This is some text inside of a div block.
5
min read
TECHNOLOGIES THAT DRIVE CONFIDENTIALITY ON THE BLOCKCHAIN
3
0
aptos-building-the-most-secure-and-scalable-layer-1-blockchain
630e4e5d0080aaac9d80210f
amb-aptos-building-the-most-secure-and-scalable-layer-1-blockchain
Login
Thank you! Your submission has been received!
Oops! Something went wrong while submitting the form.
×