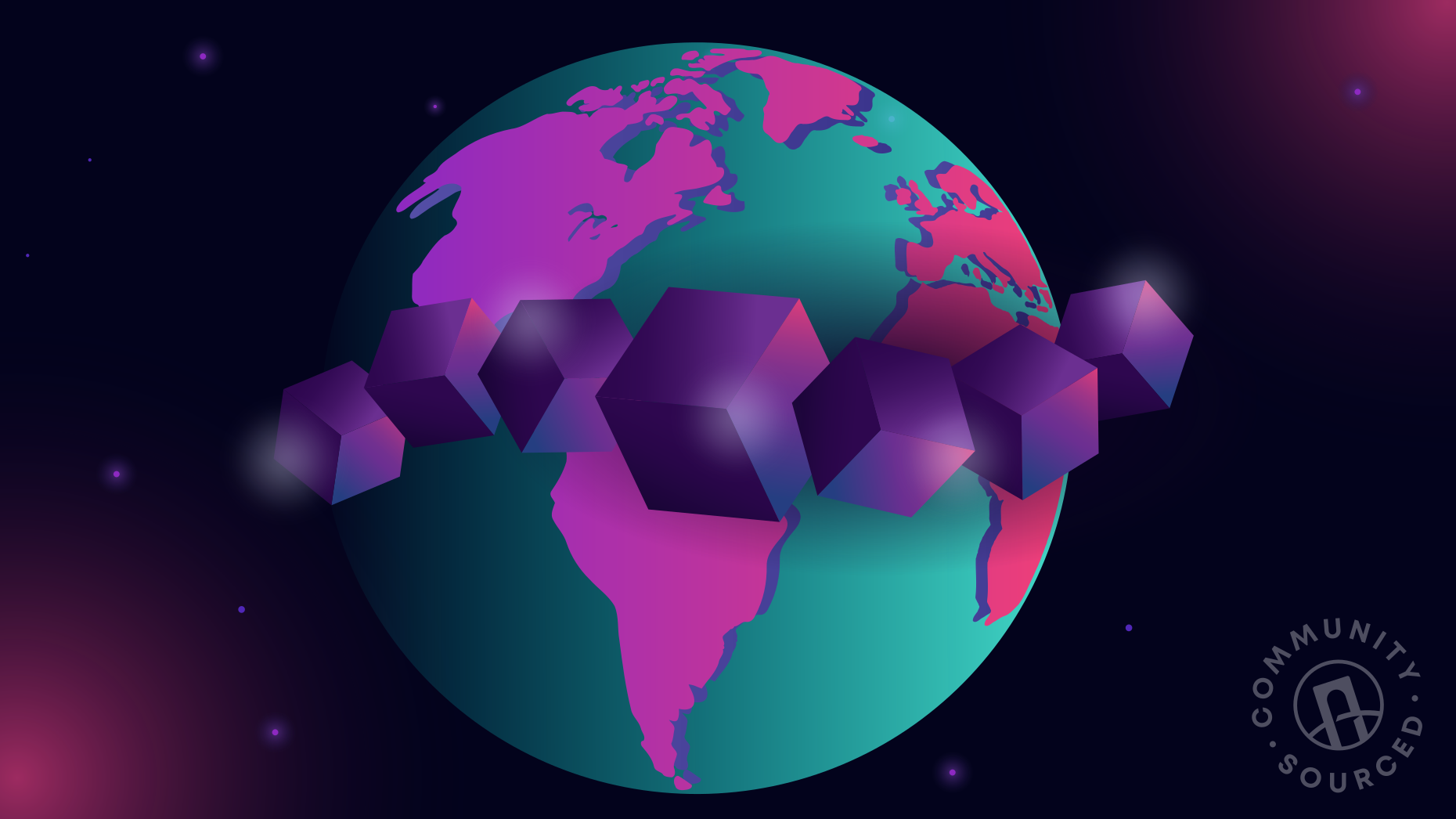 Carbon emission (CO2 emission) is the primary driver of climate change and global warming. Based on  data supplied by Climate Experts, it is glaring that even though all nations met the Paris Agreement objectives, the Earth will still be one-third of the way to reaching the decrease required to preserve the world at a sustainable margin.

In an article by UFCC, Dr. Alexandre Gellert Paris, the Associate Program Officer at the UNFCC describe the Blockchain innovation as the best possible means of reducing greenhouse gas emission as it could contribute immensely to fostering the much-needed trust, engagement, and transparency which is needed to combat the climate change problem and provide a lasting solution.

In June 2022, experts and environmentalists met in Bonn at the UN climate change conference to ascertain what the "next big step" could be as it becomes essential to utilise and employ every innovative and cutting-edge technology available to reduce carbon emissions and the greenhouse gas effect. Amongst these technologies include Blockchain technology.

A lot of futuristic thinkers have been observed to follow these trends of thoughts having observed the potential embedded within blockchain technology, hence it is no secret that Blockchain technology is considered a potential platform for the reduction of carbon emissions and recognizing it as a practical means of saving the climate.

How is Blockchain reducing Carbon Emissions?

In recent times, Blockchain technology has brought more sustainability and given hope to the raging crises with climate change especially with carbon emissions in particular ways:

Since Blockchain technology aids transactions that are almost void of carbon emission, these could be the best platform for carbon asset transactions in major places and areas that are highly populated.

For example, IBM and Energy Blockchain Lab are making progress on their blockchain technology project which aims at creating a blockchain platform to be used for carbon asset transactions and recordings in China as the recording of these transaction carbon assets on public blockchains transactions would promote its validity, transparency, and accuracy whilst reducing carbon emission in the atmosphere.

Blockchain technology is being looked into as a possible tool for monitoring and using lifecycle greenhouse gas (GHG) assessments by the joint U.S.-EU Trade and Technologies Council, which is working together on research and development of blockchain technology to measure carbon emissions. The Biden administration founded the Trade and Technology Council in 2020 to act as a diplomatic platform for harmonizing trade and technology strategies between the United States and the European Union.

With the transparency and immutability that characterizes Blockchain technology, reports about greenhouse gas emission can be tracked and monitored effectively, reducing the event of double counting errors.

Blockchain technology also works as a tool for enforcing and monitoring the progress made in contributing nationally by different countries to climate change, either positively or negatively

Through carbon trading markets, people and businesses may neutralize their negative carbon emissions by purchasing carbon credits from projects that reduce or eliminate emissions or work to sequester carbon from the atmosphere. By buying carbon credits that equal their carbon emission from verified projects that are helping eliminate carbon from the atmosphere, organizations are able to maintain their carbon neutrality status and rating.

Verified emission reductions (VERs), often known as offsets, offset credits, or carbon credits, are basically the emission reduction certificates from a carbon offset project that have been professionally evaluated against a third-party vetting criteria.

Employing Blockchain technology alongside carbon credits, organizations and projects can improve atmospheric carbon emissions via tokenized carbon credits and carbon-neutral blockchains. Carbon credits are used to regulate the amount of carbon and greenhouse gas that can be permitted into the atmosphere

Using Blockchain technology, users can buy, sell or swap between themselves using peer-to-peer platform tokens or other tradable digital assets mirroring an amount of energy production. In this way, it allows for the development of renewable energy trade. For example, Toucan Protocol seeks to build infrastructure that aids a carbon market to finance a world-class climate.

Blockchain technology can be used to aid financing and support the necessarily needed call to action to help the environment. Through its peer-to-peer platform, crowdfunding can be made in support of climate action at the same time ensuring that financing is transparently distributed to projects.

For instance, One Earth provides a platform for users to donate funds for environmental projects and dictate how those funds are used.

That's not all, OceanDrop, a non-fungible token (NFT) project, which is a sub-organization from the Open Earth Foundation possesses a charitable platform where NFTs are sold and the proceeds of such sales are used to finance projects aimed at implementing carbon offsetting activities around the protected marine areas of Cocos Island and Costa Rica.

Sadly enough, the issue of climate pollution isn't just restricted to Land pollution as the Sea isn't left out of the equation. Now fish traceability can be enhanced using Blockchain technology to stop illegal and unhealthy fishing practices leading to carbon emissions.

For example, Fishcoin, a Blockchain-based seafood traceability project promotes and urges supply chain stakeholders to share data that consist of the process from the point of harvest to the point of consumption using incentives such as tokens or digital assets. The aim is to create an open,  accountable, transparent platform within the seafood sector

6. Enhances and Speeds Up Innovative Recycling

One of the leading causes of Land pollution can be attributed to Plastic pollution. In a bid to curb this menace, the United Nations Environment Assembly decided to bring up an international treaty that checks the full life cycle of plastic beginning from production to disposal.

7. Reduction in Energy Usage and Fossil-fueled Use

With the emergence of the Carbon-neutral Blockchain, the future of tackling climate pollution and carbon emission shines bright. Unlike the initial blockchains, carbon-neutral Blockchain achieves its algorithm through proof-of-stake mining. Here, no energy is wasted mining rather, Validators are employed to verify blocks.In return, fewer fossil fuels are burned, energy is conserved and carbon emissions controlled.

Proof-of- Stake provides a fresh and intriguing method for making cryptocurrency carbon neutral. PoS computational protocols dont require mining and instead than using miners, PoS relies on validators who must commit a certain number of tokens in order to participate in the network.

The Aptos Blockchain is built with the Move programming language,  which is a Rust-based programming language developed independently by Meta and utilises the more carbon efficient proof-of-stake (PoS) consensus method by leveraging the support of a network of validators.

The Aptos Blockchain uses Parallel execution method to expedite transactions while keeping their cost low. Over 130k transactions may be processed per second via the Aptos network. Low transaction costs for consumers are the outcome of this, which is made possible by its parallel execution engine (Block-STM). The Aptos blockchain doesn't place huge restrictions on developers, in contrast to other parallel execution engines that demand upfront access to the data to be read and written; as a result, many developers and development studios are drawn to the Aptos Chain, the top of which is the Pontem Network.

Pontem is a product development studio that works with Aptos to produce core dApps and other infrastructure, including development tools, EVMs, AMMs, and more, that make it possible for anyone to use their L1.

Pontem is dedicated to assisting developers in learning about Move, creating products for the quickly expanding Aptos ecosystem, providing cross-chain interoperability of Aptos with other blockchains via Pontem's Move VM, linking permissioned and permissionless ecosystems, and accelerating the development of new Move-native applications.

LIQUIDSWAPPONTEM WALLET
how-blockchain-technology-is-helping-in-the-fight-against-global-warming-and-climate-change
635a775a01bb1d7f88bc951d
amb-how-blockchain-technology-is-helping-in-the-fight-against-global-warming-and-climate-change
Login
Thank you! Your submission has been received!
Oops! Something went wrong while submitting the form.
×