Pontem Network: Top reasons why every Web2 developers should consider a career advancement to Web3 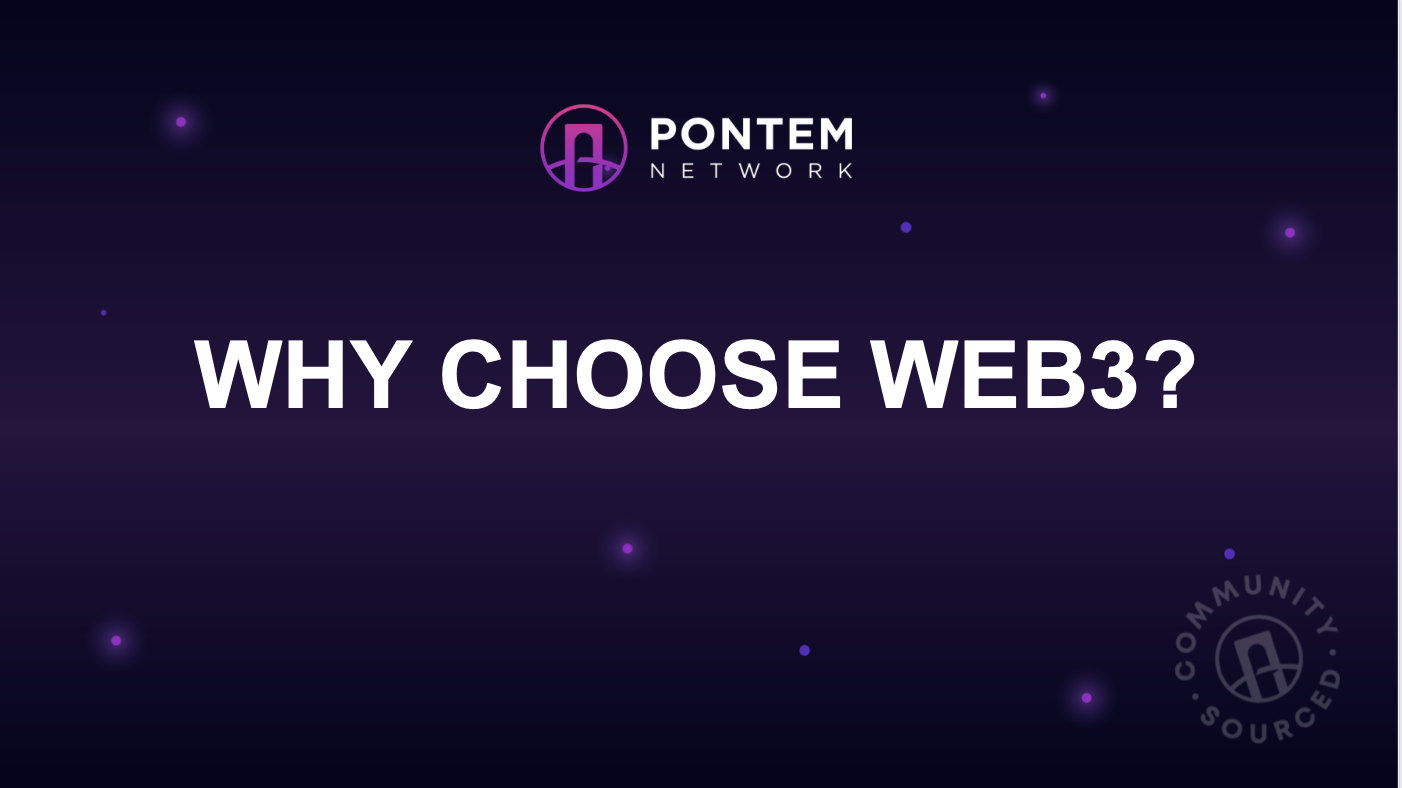 In this article, I will be explaining the benefits of moving as a developer from Web2 to web3 and dropping valid reasons why evolving into a web3 developer is essential as current innovations are beneficial and only the dynamic developers are embracing the changes.

In this article, you will get to understand how web3 has helped users control who makes money from their content and how their information is disseminated online.

Web2 is basically a term used to describe the current iteration of the internet;  an internet controlled by businesses that share your personal information to large corporations and governments for profit. In contrast, the term "Web3'' refers to decentralized apps operating on the blockchain. Decentralized applications promote anonymity, zero censorship and enable participation without using users' data for commercial gain.

Developers are known to be struggling with the Web1 and Web2 network and every Web3 user knows that it is an improved version that aims to return control to users and bases its core principles on block chain and cryptocurrency technology only.

WHY ARE DEVELOPERS PROCRASTINATING?

The developer communities for Web2 and Web3 occasionally appear to be at odds over which is becoming extinct first with Web2 developers believing web3 is a passing fad hence their reserve.

Web3 also comes with challenges which are from its unique programming language that the typical person might not fully comprehend the fundamentals of Web3, the technologies upon which it was based, and why it matters to all internet users will also be understood.

Most web3 languages, like Solidity, Move, EVM etc, are easy to learn as they use a lot of API calls with a structure that is easy to understand by any experienced Web2 developer and that's why those who eventually move find it easier than expected.

Change is a constant. Life is dynamic. In an ever evolving and fast paced generation like ours,  successful people will be those who are fluid and curious, eager to learn and try out new things. These characteristics must permeate not only our social space but our technological sphere.

Between Web2 & Web3, there are some parallels and differences.  Their major similarity is that both want to innovate, experiment with new ideas, and foster a collaborative atmosphere while maneuvering the difficulties in handling token holders, investors, and/or shareholders.

For Web3 developers, they believe they're latched into the beginning of something big that will inevitably change the world as we know it and they also marvel at the seeming invincibility and new found freedom to create anything they ever imagined without having regulators hampering their growth. Backend offices, digital forums, and gatherings are the scene of the conflict of opinions. Like all opinions, there are hardliners and more accommodative, conservative opinion holders on both sides.

Web3 is the race of the moment and has already astounded a few doubters. Several financial Nostradamuses emerged years ago to forecast the demise of Bitcoin but to date, the majority of time-based predictions have been wrong.

A lot of those who has ever expressed interest in making the switch from web2 to web3 software development has one thing in common: a firm belief that cryptocurrency and blockchain technology are the future as it  is a herculean challenge for anyone to persuade another that having NFTs may improve your life in the near future. Every adopter basically needs to be the one to convince themselves.

At the executive level, the transition from web2 to web3 is more obvious since a few of the top web2 execs have already made the switch. For instance, Pravjit Tiwana  is now the chief technical officer of Gemini, while Surojit Chatterjee, a former vice president of Google, is the company's chief product officer at Coinbase, and Brian Roberts, who formerly CFO at Lyft has joined OpenSea, a web3 NFT marketplace.

Currently, many developers are transitioning from Web2 to web3 to explore the wonderful career option within the ever expanding web3 ecosystem. But they are initially shocked to find out it's a whole different world from what they're used to.

Before getting involved in web3, it is important to conduct your research and weigh the benefits and drawbacks of receiving compensation in tokens. This is because most web3 rewards are given in tokens, which are prone to volatility and other web3 Defi issues. Also, Web2 developers who are eager to join Web3 must strive to seek methods to use Web3 to address the issues that couldn't be solved using web2.

Aptos, an extremely secure and scalable Layer 1 blockchain, is one of the communities that is enabling a big web2 to web3 migration. Aptos web3 developers receive massive support and assistance from the Aptos team in the form of collaborations, technical support and grants as the case may be. In collaboration with BNB Chain,  Aptos recently adopted the mission to enroll the first 1 billion people to cryptocurrency across numerous apps, including social networking, gaming, and more, To enable widespread adoption and give customers a smooth blockchain experience, Aptos aims at developing a safe, uniform, interoperable cross-chain, and multi-chain liquidity infrastructure.

Developers that wish to create software with a worldwide effect should use Aptos. The objective of this brand-new, autonomous project is to create the most secure Layer 1 blockchain. The team's original creators, researchers, designers, and builders established the Diem blockchain in order to first meet this demand.

Aptos is creating a vibrant environment and an active developer community that will enable crypto to become popular and the preferred option for billions of consumers globally. To assist in bringing the next billion people into web3, Aptos is collaborating with a wide range of partners. Aptos has strong collaboration with companies like Google and Pontem Network, a longstanding partner who has decided to build with Aptos.

Pontem is setting the pace for the Aptos ecosystem and is committed to building and supporting the Aptos developer ecosystem. Pontem has developed an atomic resource infrastructure that helps developers avoid making common mistakes  that are frequently faced in smart contract development including reentrance error or double spending error.

Pontem development studio is committed to drive global financial inclusion leveraging the blockchain. In order to achieve this mission, the Pontem team has developed Move Virtual Machine which has made the Move language compatible with legacy/virtual machines including EVM.

This is some text inside of a div block.
5
min read
TECHNOLOGIES THAT DRIVE CONFIDENTIALITY ON THE BLOCKCHAIN
3
0
pontem-network-top-reasons-why-every-web2-developers-should-consider-a-career-advancement-to-web3
63060994ad7c71404c4831d7
amb-pontem-network-top-reasons-why-every-web2-developers-should-consider-a-career-advancement-to-web3
Login
Thank you! Your submission has been received!
Oops! Something went wrong while submitting the form.
×