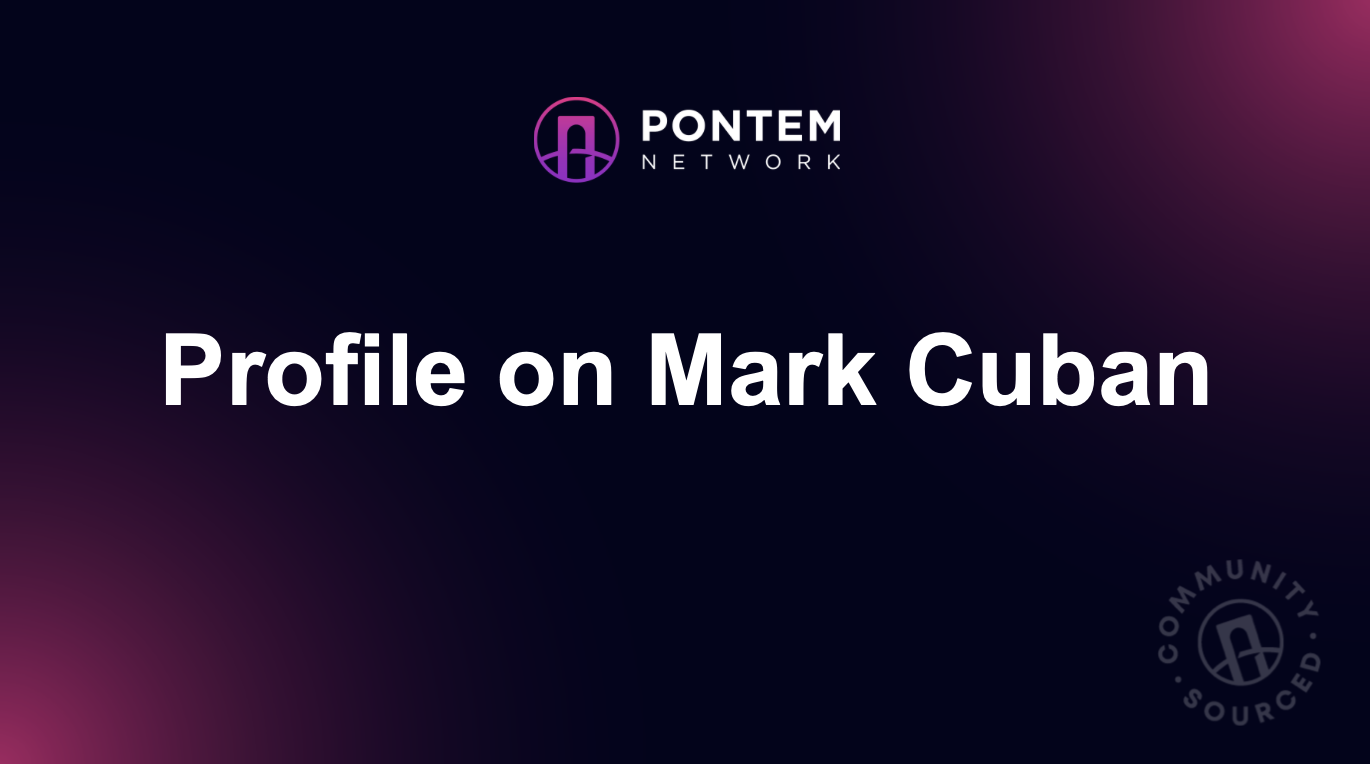 Mark Cuban is an American entrepreneur with a net worth of $4.7bn, and a prominent crypto investor. He frequently speaks out on cryptocurrency, and his opinions on BTC and especially DOGE carry a lot of weight in the market, so it’s worth knowing more about this career

Mark Cuban was born on July 31, 1958, in Pittsburgh, USA. He grew up in Pennsylvania (a suburb of Pittsburgh) in an ordinary family of workers. His father Norton Cuban worked in an auto repair shop.

Since childhood, Mark was distinguished by their resourcefulness and creativity. His first little success was at the age of 12 selling garbage bags. With the proceeds, he bought a pair of expensive sneakers.

Young Mark changed a lot of jobs: he was a bartender, a dance instructor in the direction of disco, and a shoe salesman ... As a teenager, Cuban liked to collect stamps. He once made a good deal by selling a rare series of stamps for which he got $1,100. That money went to pay for his college tuition.

In 1981, Mark Cuban received his undergraduate degree and a bachelor's degree in business and industrial management.

In 1983 Cuban started a computer consulting firm, Micro-Solutions, working at it seven days a week for 12-15 hours, month after month, year after year. His philosophy was simple enough: "Say yes to whatever the client asks”. He later sold the company to his lodger, Perot Systems.

In 1990, after making $30 million, the 30-year-old Cuban decided to retire. He rested for five years, and in 1995 he created broadcast.com, an Internet company, later selling it to Yahoo for $2 billion.

With $280 million of that money, he bought the basketball team Dallas Mavericks. For years, the Dallas Mavericks were at the bottom of the Western Conference rankings, never thinking about playing in the NBA. But after Mark Cuban’s purchase, the Mavericks won 31 out of 50 games and made it to the NBA tournament for the first time in 11 years.

Mark Cuban has been a major investor in the ABC reality show "Shark Tank" since 2011. As of May 2015, he has invested in 85 deals on 111 episodes of Shark Tank for a total of $19.9 million. Mark Cuban's three biggest deals are investments in such projects as Ten Thirty One Productions, Rugged Maniac Obstacle Race and BeatBox Beverages. Investments in each project totalled at least $1 million.

Shark tank is a show where inventors present their product or service to a panel of lenders or “sharks” for money.

Mark Cuban said in an interview that he invests 80% of his money in cryptocurrency. "The investments I'm making now are not in the traditional business," Cuban said.

He also shared that he became fully involved in the digital asset industry after he created his first NFT.

"I always paid attention to bitcoin, the pricing, the tokens and the [crypto]currencies. But what really got me into it was, about a year ago, when I minted my first NFT." the billionaire said at the North America Bitcoin Conference.

In March 2021, Cuban said the Dallas Mavericks were even thinking about turning their tickets into NFT items.

"With the Mavericks, we're trying to find a good option for turning our tickets into NFT items," Cuban told The Delphi Podcast. "We want to be able to find ways that our consumers, our fans, can not only buy tickets and resell them, but continue to get royalties from them."

In addition, the NBA team Dallas Mavericks, which is owned by Cuban, has partnered with cryptocurrency company Voyager and in early 2021 began accepting DOGE as a means of payment for goods and promoted the meme coin as the "strongest" cryptocurrency.

Cuban reported that "significant sales" have been made with DOGE since then. He even encouraged popular talk show host Ellen Degeneres to accept it in her store.

To further encourage the use of dogecoin for payments, Cuban wrote on his Twitter page that Mavericks would make a special announcement about Dogecoin. He called it a "summer merchandise sale with special prices for those who pay with Dogecoin."

However, the investor later said that he was not interested in speculating about cryptocurrencies such as Bitcoin (BTC) and Dogecoin (DOGE), he compared them to "gaming machines," similar to what happens with stocks.

Over the past few years, Cuban's stance on crypto-assets has changed significantly. Previously, he said he would "prefer bananas"  to Bitcoin. Sometime later, the investor supports Polygon (MATIC) and invests hundreds of thousands of dollars in tokenized carbon offsets and has called for more regulations on stable coins.

As Cuban said, he considers himself a crypto evangelist. He sees promise in the field and has a cryptocurrency portfolio consisting of various digital coins, NFTs and investments in many blockchain companies.

To date, Cuban has invested in companies like Blocto, a universal cross-chain wallet for smart contracts; platforms allowing to trade of NFT and other digital assets, and several DeFi protocols: OpenSea, Lazy and Mintable; Alethea AI, which creates a decentralized protocol for creating a smart meta world populated with interactive and intelligent NFT; Arbitrum, a scaling solution for Ethereum, and many other companies listed on Cuban's website.

In early 2022, the crypto investor announced that he was investing in blockchains such as Ethereum (ETH) and Polygon (MATIC).

He justified his decision by saying that while Bitcoin is reliable and is a great savings vehicle, Etherium and Polygon are notable for their utility and because of the functionality of these two networks there are many possible uses for blockchain now and in the future.

Cuban has repeatedly expressed his positive opinion of ETH, he believes that blockchain has tremendous promise in the future.

Mark Cuban's wallet address became known to the world when the investor launched his NFT collection on the Lazy platform. To date, the total amount of assets at the famous address is more than $500,000.

In total, the billionaire's cryptocurrency portfolio is valued at $546,876.

In the past weeks, Mark Cuban shared his opinion on the current situation in the cryptocurrency market.

He says it all reminds him of what Warren Buffett said: "When the tide subsides, you'll see who's swimming naked”.

Likewise, he added: "In stocks and cryptocurrencies, you'll see companies that were held on cheap, easy money but didn't have serious business prospects disappear."

Despite the negative sentiment and panic in the market, Cuban said he expects the cryptocurrency market to innovate as a result of this situation.

"Breakthrough applications and technologies released during a bear market, whether in stocks, cryptocurrency or any other business, will always find a market and succeed."

This is some text inside of a div block.
5
min read
TECHNOLOGIES THAT DRIVE CONFIDENTIALITY ON THE BLOCKCHAIN
3
0
profile-on-mark-cuban
630e4c5530a08a0134c6636c
amb-profile-on-mark-cuban
Login
Thank you! Your submission has been received!
Oops! Something went wrong while submitting the form.
×