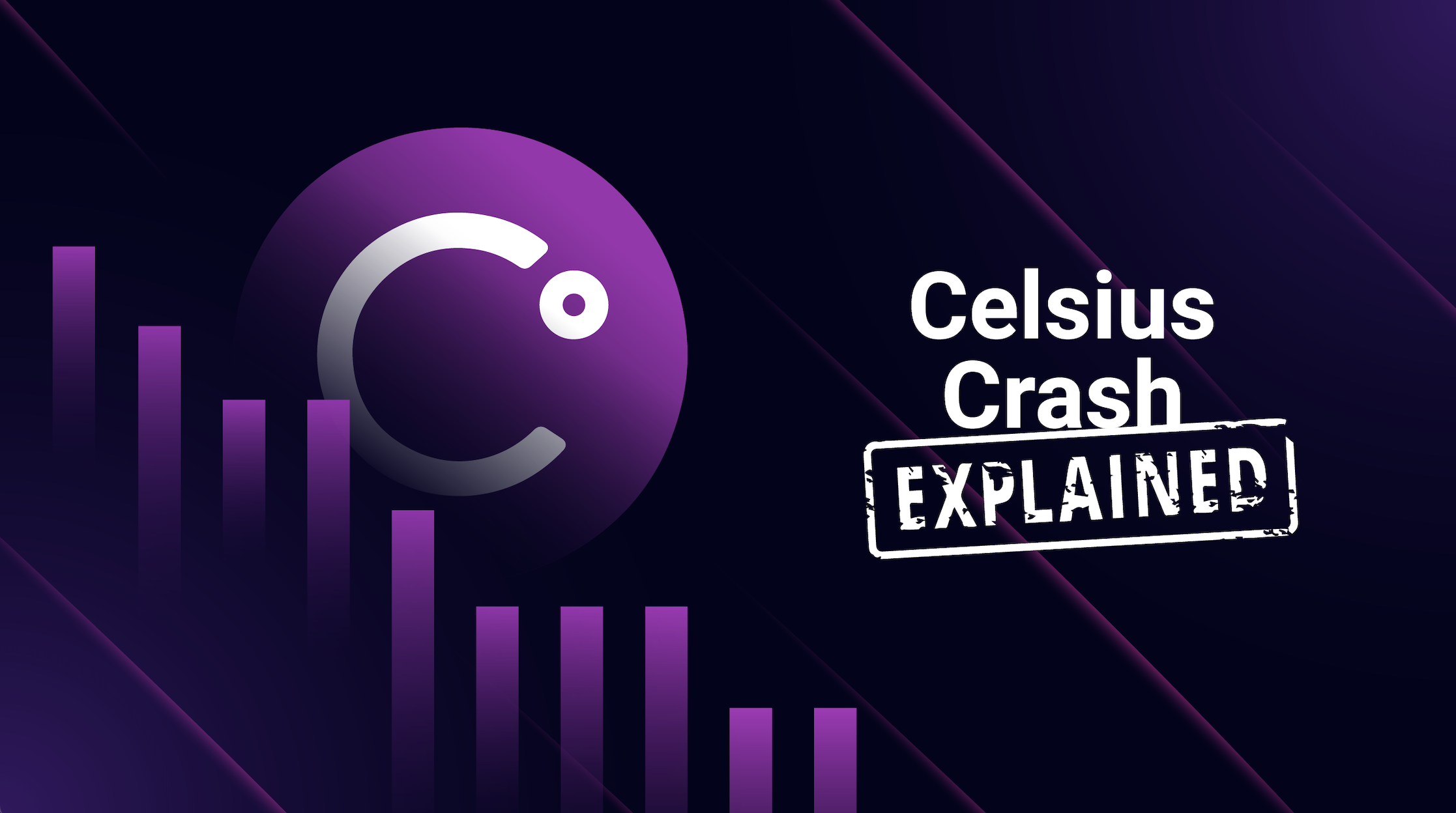 Breaking down the latest crypto crisis

“If it seems too good to be true, it probably is.”

This is a great, time-tested piece of financial advice that everyone should know, especially when you work in crypto.

It certainly came true in the case of Celsius, the massively popular crypto lending tool that suffered a liquidity crisis in June 2022, freezing billions in customer assets and causing ripple effects across the space. Token prices tanked and the already-fragile crypto industry became further destabilized. It’s still unclear how the saga of Celsius will conclude and what the total damage will be, but let’s get into how it all fell apart.

Celsius is a crypto lending platform that also offers services similar to major exchanges, such as buying and swapping tokens and earning yield on holdings. Celsius was founded during the ICO boom of 2017 by Alex Mashinsky and S. Daniel Leon. The company offered a native CEL token, which functioned as an internal rewards system.

The company grew rapidly, surpassing $10 billion in customer assets and billions in loans by 2020. By May 2022, Celsius claimed 1.7 million users and $11.7 billion in assets under management (AUM). They also claimed to have issued $8 billion in loans. Most importantly for this story, Celsius offered eye-poppingly-high annual percentage yields (APYs) of up to 18% on crypto deposits. Customers could also stake their CEL to boost their rewards even further.

In the crypto space, such rapid growth is not unheard of, and Celsius’s meteoric rise was heralded as an example of mass crypto adoption.

Much of Celsius’s branding was built on a negative perception of banks. CEO Alex Mashinsky was fond of saying “Banks are not your friends” and even wore shirts emblazoned with that motto. The Celsius website’s tagline is “Unbank Yourself.”

But what really is a bank? Well, it’s a place where you can store money, borrow money, and earn interest on your money. In other words, exactly what Celsius offered, albeit with cryptocurrency tokens instead of fiat currency. But mishandling and losing funds is equally devastating for individuals, no matter how that value is stored.

The fine print  on the Celsius homepage reads:

“Celsius is not a bank, depository institution, custodian or fiduciary and the assets in your Celsius account are not insured by any private or governmental insurance plan (including FDIC or SIPC), nor are they covered by any compensation scheme (including FSCS).”

This gets at exactly the heart of the problem. FDIC, SIPC, and FSCS stand for Federal Deposit Insurance Corporation, Securities Investor Protection Corporation (both United States programs) and Financial Services Compensation Scheme (United Kingdom). These programs were created in response to serious market collapses (the FDIC in 1933 and the SIPC in 1970) as insurance for customer assets held by banks and securities brokers. They ensure that in the event of a bank collapse or liquidity crisis, individual clients do not lose all their money.

Celsisus was explicitly not covered by these customer protection programs. So when crypto prices collapsed, just as happened to traditional markets in the 1920s and 1960s, there was no backstop and no protection.

Celsius did havea “Trust” page on their website, advertising “fair and transparent services that have been abandoned by banks - fair interest, low rates for loans, andlightning quick transactions.” However, the only certificates cited on this page were for Anti-Money Laundering compliance. These only protectCelsius from responsibility for potential malfeasance conducted on their platform, but do not protect customers.

How did Celsius become so popular?

The key reason behind Celsius’s explosive growth were the double-digit yields offered on deposits. Celsius offered crypto APYs as high as 18% when earning rewards in the CEL token.

Let’s recall what Annual Percentage Yield means: for every dollar deposited in a Celsius Earn account with an 18% APY, a user received 18 cents in interest after one year. This is really high, particularly since the deposits (supposedly) did not come with the risk of investing in a security. It’s no wonder $10 billion flooded into Celsisus with those kinds of returns.

But how could Celsius promise such high interest rates? By investing customer funds in increasingly risky DeFi protocols. Back in 2020, Celsius generated its yields by lending out customer assets and earning interest on these assets. They required collateral for these loans as a risk management hedge. This is fairly common practice for banks and Wall Street securities brokers (which Celsius stressed it was not in the fine print).

But as time went on, Celsius began putting money in more complex DeFi tools. This allowed them to promise higher yields, but with much more risk.

The protocols in question included Terra, Lido, BadgerDAO, Stakehound, and more. Hawk-eyed readers will note that all of these have suffered collapses, exploits, or other problems recently, all of which may have exposed Celsisus customers to those losses. Let’s take a look one by one.

What happened to Celsius?

TLDR: a liquidity crisis led to a bank run.

But let’s get into the long version.

As you’ve probably heard, the last few months have been tough times for crypto. The total market capitalization of the entire space has fallen from a peak of $3 trillion in November 2021 to $1 trillion by the start of July. Prices for major tokens have tumbled precipitously, with Bitcoin and Ethereum falling more than 70% from their all-time highs.

In addition, and perhaps most importantly for our purposes, Terra’s USTLUNA stablecoin lost its peg and fell from $1 to below $0.0199, wiping out billions of dollars of wealth and creating a sense of chaos and confusion across the space. (Make sure to read our full breakdown.)

The situation came to a head on June 12th, 2022, as Celsius announced it was freezing withdrawals due to “extreme market conditions.” In other words, depositors could no longer access their money.

As you can imagine, this led to an outpouring of anger, frustration, and suspicion. Celsius claimed their “ultimate objective is stabilizing liquidity and restoring withdrawals, Swap, and transfers between accounts as quickly as possible.”

Mashinsky responded with typical bluster and framed it as a crypto versus TradFi issue, accusing critics of spreading “FUD [fear, uncertainty, doubt] and misinformation.”

But all that talk did not save Celsius or its customers. On June 30th, the company posted a message saying that they were “focused and working as quickly as we can to stabilize liquidity and operations, in order to be positioned to share more information with the community…We continue to take important steps to preserve and protect assets and explore options available to us. These options include pursuing strategic transactions as well as a restructuring of our liabilities, among other avenues.”

Translation: “We still don’t have your money.”

It still remains unclear how this saga will conclude. On July 11th, it was reported that Celsius is considering filing for bankruptcy. They have also contacted Citigroup for advice and financing options. (Maybe banks are your friends after all?)

While all of this certainly comes as a shock and a tremendous disappointment for Celsius’s users, there were some warning signs about the project, its practices, and its team. These signs can be valuable lessons for all of us.

Celsius had been flagged repeatedly in the past for regulatory non-compliance, particularly in relation to its operation as an unlicensed and unregulated bank. Alabama, New Jersey, Texas, and Kentucky all issued cease-and-desist orders over Celsius’s’ Earn products (the accounts which generated the famous high yields). These complaints focused on the failure to tell depositors how their money was used and if it was protected.

Now, Celsius is being sued by an investment manager named Jason Stone, alleging they artificially inflated the price of the CEL token and essentially operated a “Ponzi scheme.” Stone ran a firm called KeyFi which had a “handshake deal” to manage Celsius funds, but left the firm in March 2021.

The lawsuit alleges that “Celsius failed to implement basic risk management strategies to protect against the risks of price fluctuation that were inherent in many of the deployed investment strategies” and that there were “multiple incidents” in which Celsius’s “failure to perform basic accounting endangered customer funds.”

Stone also alleges that Mashinsky enriched himself handsomely, using a Celsius wallet for his own benefit, transferring funds to his wife, compensating himself with the CEL token, and purchasing NFTs with company funds.

Now, Securities and Exchange Commission Chair Gary Gensler, the chief financial regulator in the United States, is warning about similar programs: ​“I caution the public. If it seems too good to be true, it just may well be too good to be true in terms of those marketing and those websites that talk about seven or 17% returns.”

For now, all we can do is hope that individual customers are able to recoup their funds and that the damage is limited to Celsisus, without rippling across the rest of crypto. Hindsight is 20/20, but this story hopefully reminds us to always do our research and act carefully with our money. It also illustrates the importance of using on-chain, non-custodial DeFi tools on an ultra-secure blockchain like Aptos, as opposed to opaque, centralized products like Celsius

And remember: if it seems too good to be true, it probably is.

Pontem is building foundational dApps for Aptos to advance global financial inclusion and bring the power of blockchains to one billion users. Follow us on Twitter and Telegram for updates.