The evolution of Bitcoin mining 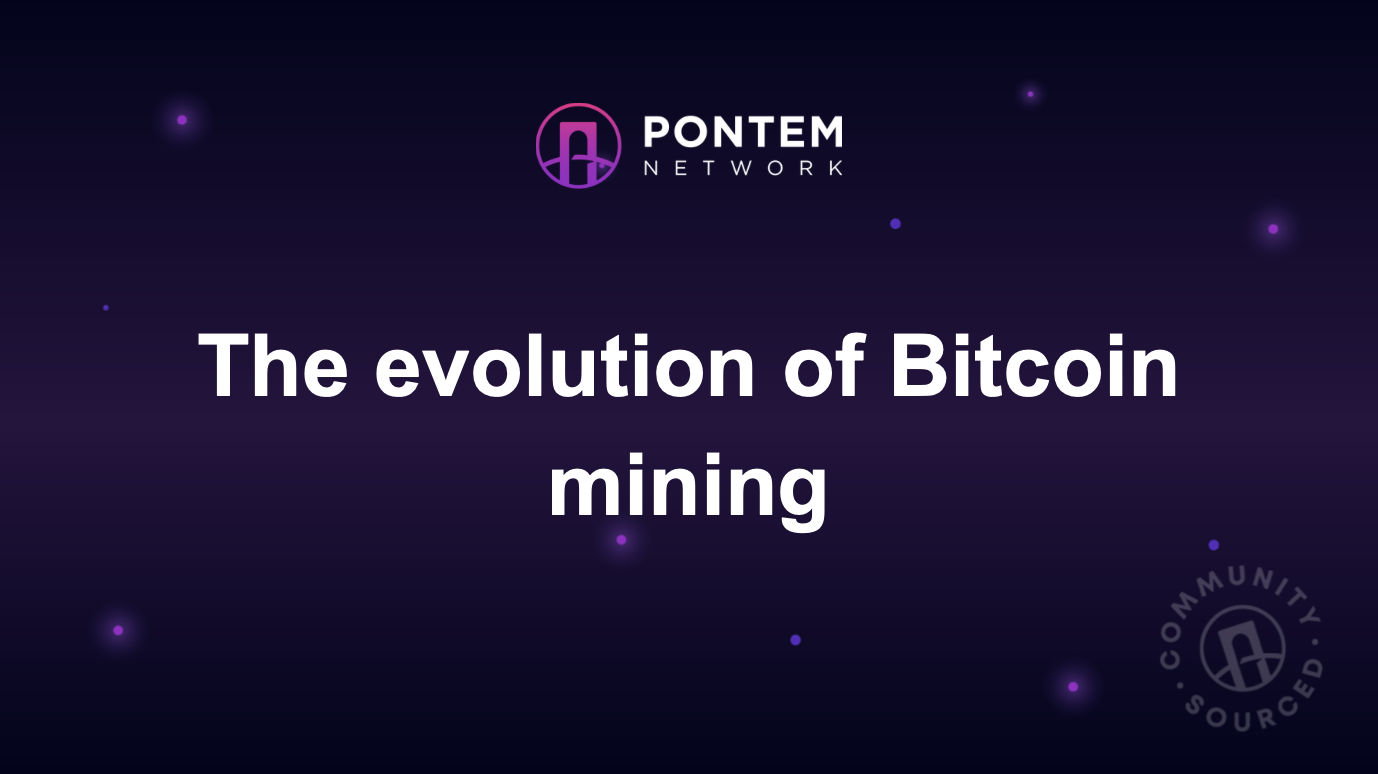 The emergence of cryptocurrencies could be the starting point for a dramatic transformation of the entire global financial system. But Bitcoin has also spurred the development of a new technology: cryptocurrency mining.

Cryptocurrency mining was born on January 3, 2009, when the genesis block of the Bitcoin blockchain was created. The first BTC were mined by Satoshi Nakamoto himself, the pseudonymous creator of Bitcoin.

In the beginning, Bitcoin was mined using regular computer processors, or CPUs. This was supposed to make Bitcoin truly decentralized, as anyone could engage in mining from their home.

For a while, cryptocurrency and CPU mining remained a toy for geeks. But as hundreds of processors joined mining, it triggered the complexity change algorithm built into the code. In very simple words, the more people are mining Bitcoin, the more difficult it becomes.

The first ever increase in complexity happened almost a year after the genesis block was created. The biggest one occurred on July 16, 2010, when complexity quadrupled. This followed the publication of an article on Bitcoin on July 11 on the Slashdot website, which is popular among tech geeks. In just a few days, the number of Bitcoin users, and thus miners, increased many times over.

By the summer of 2010, the popularity of Bitcoin had grown so much that its mining started to bring real (though modest) income. In July, 1 BTC was worth about 10 cents, and mining one block earned a user about $5.

It wasn’t long until mining became a commercial enterprise. ArtForz was the first to launch a mining farm using GPUs, or video cards.

The transition to video cards was a huge leap compared to mining with CPUs. A single video card can be dozens of times more efficient than one CPU, and up to 4 video cards could be installed on a single cheap motherboard. A whole mining farm with several top-range graphic cards could be purchased for the price of one computer with two CPUs. So it’s not surprising that video cards soon relegated CPU processors to the background.

In September 2010, the first cryptocurrency mining pool in history was launched: Bitcoin.cz, also known as the Slush pool. It is still working, and its creator, Czech programmer Marek Palatinus, is still an active member of the community.

In early January 2011, Slush pool reached a capacity of 10 GH/s – a huge number for that time, though now it seems ridiculously low, considering the current hashing rate of 12.82 EH/s.

Starting in February 2011, the price of Bitcoin began to go up rapidly without pullbacks, and miners’ income rose dramatically. The prospect of easy money caused  a surge in demand for video cards.

As the network hashrate grew, mining complexity also increased – at least until the infamous Mt. Gox exchange hack, which led to an outflow of users, a decrease in the hashrate, and a drop in mining difficulty.

Litecoin: the next step in mining

Many in the industry were concerned that CPU owners ended up excluded from mining. As a solution, the Bitcoin network was forked to create a new cryptocurrency, Litecoin. It was supposed to give users a chance to continue mining on CPUs.

In the end, Litecoin miners also switched to GPUs. For almost 3 years, video cards remained the only profitable way to mine. However, the halving of bitcoin mining rewards from 50 to 25 BTC and the increased complexity of mining made the process quite costly: graphic cards consumed a lot of power, needed a lot of attention, and incurred additional maintenance costs. . As a result, miners started to seek alternatives.

2011 was marked by the emergence of FPGA (field-programmable gate array) mining chips -  semiconductor devices that could be configured for the task of Bitcoin mining. It was the first attempt to reduce power costs and increase the stability of mining. FPGAs’ success was short-lived, but they acted as precursors for  future ASIC miners.

ASICs (Application Specific Integrated Circuits) were already used in many industries that have nothing to do with cryptocurrency. Once adapted for BTC mining, they became the flagships of this industry, because they were much more power-efficient that multipurpose devices like GPUs. ASICs delivered far higher returns compared to graphic processors.

At the moment, ASICs remain the only way to get into the billion-dollar business of mining Bitcoin and some other cryptocurrencies. But although ASICs have replaced video cards in BTC mining, GPU owners keep finding new uses for them. To this day, many continue to mine ETH with GPUs, because the profit still exceeds the cost.

ASICs helped create industrial-scale Bitcoin mining and made the costs of cryptocurrency extraction clearly calculable. Although the prices of BTC and ETH are not always aligned with the mining costs, they can have a fairer market valuation. In this sense, the evolution of mining is an essential part of the development of the crypto market as a whole.

Many reputable economists recognize that the emergence of cryptocurrencies could be the starting point for a dramatic transformation of the entire global financial system. But financial technology is not the only area where Bitcoin has created an impetus for development and change. Another area is bitcoin mining, known as mining.

Mining was born on January 3, when the genesis block was created. The first BTC were mined by Satoshi Nakamoto himself.  From the technical point of view, Bitcoin mining on processors is not interesting - it is a usual hash calculation operation using SHA256 algorithm, which is performed in many other cases, not related to cryptocurrency. Satoshi probably didn't know how fast the mining industry would grow. It was mining on PC processors, the most massive chips in the world, that was supposed to make Bitcoin truly decentralized. There is only one vulnerability here - to botnets, which can force tens of thousands of users' computers to mine for one wallet. While cryptocurrency remains fun for geeks, CPU mining has not been very popular. The first change in Bitcoin complexity, showing that several hundred processors were already mining, almost a year after the genesis block was created.

The biggest increase in complexity in a single recalculation, by a factor of 4, happened on July 16, 2010 in block 68544. It happened due to the publication of Bitcoin on July 11 on the website Slashdot, which is popular among geeks. In just a few days, the number of Bitcoin users, and thus miners, increased many times over.

Overcoming the difficulty. The era of video card mining

By the summer of 2010 the popularity and rate of Bitcoin grew so much that its mining started to bring real income, though quite modest. In July, 1 BTC was worth about 10 cents, that is, mining one block brought about $ 5. Mining started to pass on a commercial basis, and the competition caused overclocking of mining capacities. On July 18, ArtForz for the first time launched a GPU mining farm and got the first block, using environmental resources implemented in an OpenCL driver. Thus began the era of industrial mining. The transition to video cards was a huge leap compared to the CPU - not only does one video card count several dozen times more hashes than the CPU, on one cheap motherboard even then you could install up to 4 video cards, and later - up to 6, with a limit of 8 GPUs. A computer with even two processors in the minimum configuration costs almost as much as a farm of several top graphics cards. Thus, video cards immediately relegated processors to the background. However, for some time, GPU mining software remained unavailable for mass use. Only in September 2010 was published a CUDA-based miner for nVidia cards, and in October - for ATI Radeon based on OpenCL.

On September 18, the first cryptocurrency pool in history - Bitcoin.cz, known as Slush's pool - opened. It is still working, and its creator, Czech programmer Marek Palatinus, is still an active member of the community. In early January 2011 the pool gained a capacity of 10 GH/s, which now seems ridiculous, considering that the current hashing rate is 12.82 EH/s.

After February 9, when the exchange rate began to go up rapidly without rollbacks, mining was bringing just a fantastic income. When people felt the easy money, they began to buy up all the video cards en masse. Which led to an increase in sophistication to 1000000. However, soon came the hacking of Mt.Gox, and then the closure of several services, due to which there was an outflow of users and of course the power of mining

A shelter for video cards

The first solution was FPGA (field-programmable gate array) chips, a semiconductor device that can be configured by the manufacturer or developer after manufacturing; the most sophisticated kind of programmable logic integrated circuits. It was the first attempt to reduce power costs and increase the stability of mining. But it didn't find its glory, but it was a good start for the future ASIC-mainers thanks to its own developments.

ASIC (Application Specific Integrated Cirquit) became the flagships of mining because they were used for a specific algorithm, which gave fantastic returns because ASICs are built for a specific task. At the moment ASIC is still the only way to get into the business of mining bitcoin and some other cryptocurrencies. Moreover, this business can now be considered as big as, for example, coal and other minerals mining.

It is worth noting the fact that although ASICs have displaced video cards from bitcoin mining due to their efficiency. Video card owners are always finding a new place where their cards would make sense. To this day, many video cards continue to mine ethereum because the cost of mining is still less than the profits generated.

ASIC has brought mining into a new league, and created a new kind of industrial business, where cryptocurrency began to have weight due to the fact that the cost of its extraction has specific clear figures, thanks to the costs of its extraction. Therefore, it is safe to say that at least bitcoin and etherium have a fair price due to the costs of their extraction, in other words they are secured by the price of their extraction. Although the rates of these currencies are not always equal to these figures, in any case, there is a place where the interest in buying them will be very justified.