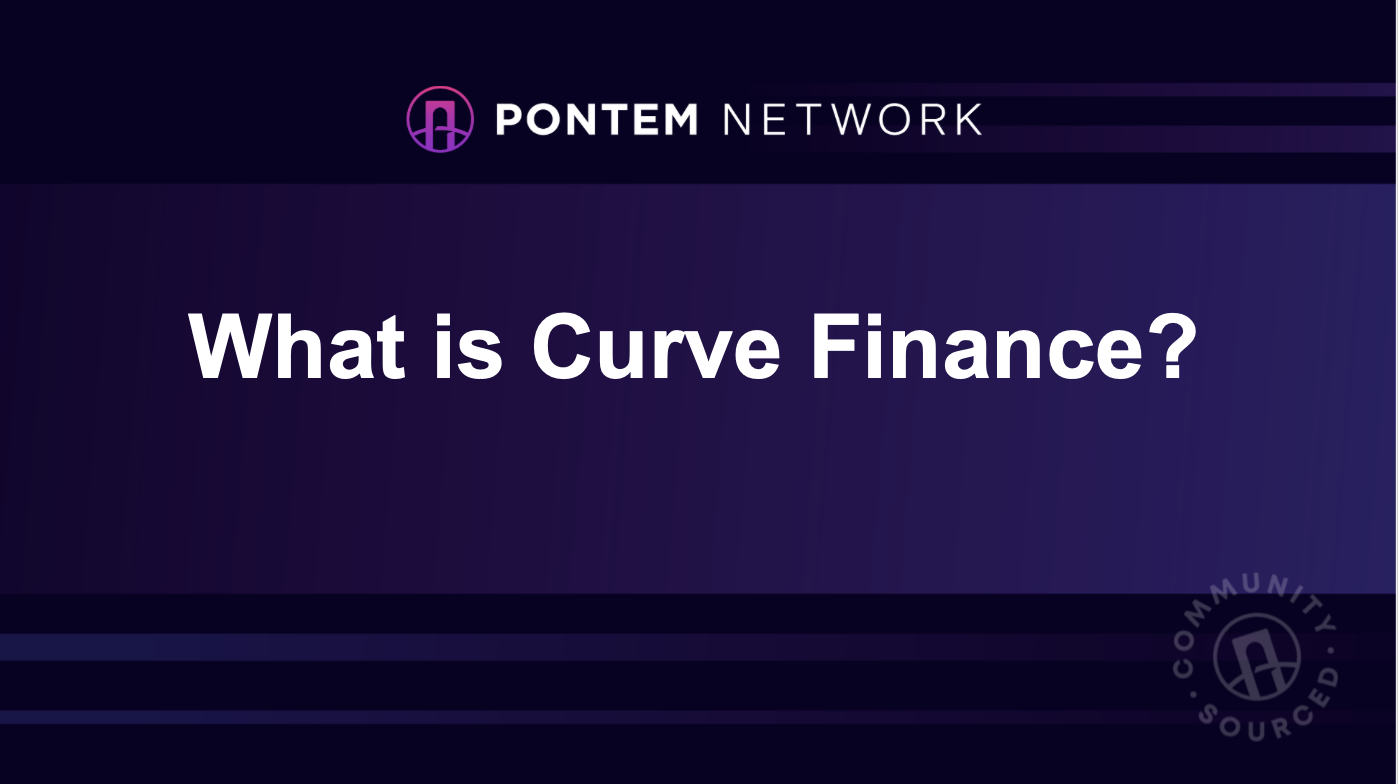 No doubt Curve has emerged as one of the most popular destinations for traders looking for an efficient way to exchange or trade their crypto assets on a decentralized exchange and also earn rewards for providing liquidity. Curve Finance makes it possible to exchange stablecoins and other essential mERC-20 assets like $wBTC and $wETH in a high-liquidity, low-fee, and low-slippage manner.

Getting started on Curve can be quite challenging, especially for starters. The unique user interface alone doesn't look like much of what we are familiar with on other crypto exchange platforms. In this article, we'll be delving deeper into what Curve is all about and exploring its capabilities.

First of all, Curve is an exchange similar to Uniswap and Balancer in some ways. It is an automated market maker (AMM) that offers an efficient exchange environment with low fees and low slippage for tokens. This is made possible by providing liquidity pools of similar behaving assets, most especially stablecoins or wrapped versions of Bitcoin. Liquidity providers offer liquidity to Curve liquidity pools and are rewarded for it.

Curve also supplies liquidity pools to some DeFi services, and these DeFi services are given much-needed liquidity and at the same time the opportunity to earn some percentages in trading fees as rewards, in addition to their yield earnings.

Curve, launched in January 2020, was initially called Stableswap. It began as a decentralized exchange for stablecoins, allowing traders to swap only stable assets without much slippage or fees. On January 27 of 2022, the project’s stats page reported a record-breaking volume of $3.2 billion in 24 hours.

Curve prides itself on being the biggest DeFi project in the world. This is because of its total locked value (TVL) which reached $20 billion in 2021 against its initial value of $1 million in 2020. Quite an impressive example of growth, one must admit.

In August of 2020, Curve launched a decentralized autonomous organization (DAO) with CRV as its governance token. CRV is a composition of several smart contracts connected by Aragon, a DAO creation tool that is based on Ethereum. Curve was able to develop its own interface while utilizing all of Aragon's capabilities by using Aragon Connect. Curve is, however, different from Aragon in Time-locked voting, fee burners, token inflation, and other liquidity mechanisms.

The CRV token was created to incentivize liquidity providers on the project's platform and get as many voters as possible in the protocol's governance. At the time of writing, CRV has three use cases: voting, staking, and boosting. CRV has a total supply of  3,303,030,299 CRV coins. A good percentage of the Curve's CRV token is locked across various Defi protocols.

A term, now tagged as "Curve Wars" by experts in the industry, is used to describe a competition existing between various protocols, as they strive to get users to vote for their pools by offering them the highest $CRV rewards or ‘bribes’. One of Curve's major goals is to provide a means for trading stablecoins with low fees and minimal price variation.

The founder of Curve is Michael Egorov, a Russian scientist ad physicist who used to work for LinkedIn and also co-founded NuCypher and LoanCoin. He graduated from the Moscow Institute of Physics and Technology.  Michael won the 2003 International Physics Olympiad with a bronze medal.

After being introduced to cryptocurrency in 2013 and subsequently, DeFi, Michael joined Maker in 2018. He started looking into liquid staking, which eventually inspired him to create an algorithm for generating deep markets for assets with comparable prices. Michael built Curve Finance on top of this algorithm around the beginning of 2020.

How Does Curve Finance Work?

To be more clear, Curve's bonding curve allows large amounts of stablecoins to be traded with minimal changes in the prices of these cryptocurrencies. Curve lets investors avoid more volatile crypto assets while still earning high-interest rates via lending protocols by concentrating on stablecoins.

The Curve model is extremely conservative when compared to other AMM platforms because it steers clear of volatility and speculation whilst prioritizing stability. Unaware to most traders in other decentralized exchanges like Uniswap, 1Inch, etc. is that two trades happen in the background. Assume you were looking to trade a pair of stablecoins for instance Stablecoin A for Stablecoin B on a decentralized exchange. You place your order, and the protocol will first convert  Stablecoin A to ETH and then sell that ETH for Stablecoin B and then, you will be given Stablecoin B.  hence, resulting in high trading fees and longer time. This is not the case with Curve.

One strong difference between Curve and other decentralized exchanges is that Curve's slippage (the maximum price tolerance that traders will allow when placing orders) is low because trades are mainly between stablecoins and wrapped versions of Bitcoin. Currently, the platform supports a number of stablecoins pegged to the USD, including USDT, USDC, and TUSD, as well as a handful of EUR-pegged stablecoins, wrapped ETH, and wrapped BTC.

How Do Curve Pools Maintain a Fairly Balanced Price?

Contrary to what is obtainable on other AMMs where volatility is quite high, Curve strives to maintain a balance in price and minimal volatility. For instance, if you want to sell DAI on Curve, this is what happens:

When compared to other AMM liquidity pools, the prices of assets in Curve’s pools are less volatile relative to one another. DAI is sold at a discounted price to return the pool to its initial condition. Curve Finance is able to minimize impermanent loss by restricting the number of pools and the kinds of assets in each pool - unlike in Uniswap, where pools can be made up of any tokens, resulting in high volatility.

Apart from traders earning money from trading fees, one can also earn from lending as well. Lending pools on Curve Finance require that anyone can lock up their cryptocurrencies so that they can be used for trading on other protocols, such as Compound or yEarn. Curve encourages users to lock their coins by offering them a certain percentage of the trading fees.

Currently, Curve has seven lending pools; one of them is the Compound pool which features the wrapped tokens cDAI and cUSDC. Liquidity providers are able to earn an interest from lending DAI and USDC on Compound and also fees from token swaps on the pool.

Curve runs on several L1 blockchains and Ethereum’s sidechains, as can be seen in the ‘Network’ section of Curve’s homepage above. Although Ethereum will always be Curve's main chain, other chains offer benefits such as speed and cost.

Over the years the DeFi space has experienced massive growth and also a substantial increase in the combined total value locked (TVL) across DeFi platforms from $630 million in 2020 to $172 billion in the first quarter of 2022. Curve has the biggest TVL and market share of any cryptocurrency, accounting for 9.7% of the market and $25 billion in TVL according to DefiLlama.

To make use of other chains other than Ethereum on Curve, you have to send your funds from Ethereum to the other sidechain using a bridge or a centralized exchange interface. Also, when moving to a different chain, you need to connect your wallet using the chain's ID and RPC. However, this can be automatically populated and the network switched by the simple click of a button.

Although The Curve DAO is too sophisticated to be easily connected to anything outside of Ethereum, some functionality (including CRV emissions) is possible on the different sidechains where pools are running. Each chain on Curve comes with its trade-off between scalability, Security, and the cost of use. Read here for implementation details.

The following includes Curve's versions on different chains and their useful links:

Currently, Curve does not run on Binance Smart Chain, but an alternative was developed by the team at Ellipsis that delivers on the same functionality and is authorized by Curve.

Unlike centralized exchanges that match buyers and sellers using order books, and DEX aggregators offering a variety of assets, Curve sets itself apart by providing a suitable means of exchanging stablecoins and wrapped versions of BTC and ETH via liquidity pools at low fees and low slippage at the same time offering liquidity providers rewards for providing liquidity. CRV is the utility token of Curve.fi for the exchange of stablecoins and ERC-20 tokens. Also, CRV token holders have the power to propose and decide on platform changes.

As part of Pontem’s objective to build cutting-edge foundational dApps for the Aptos and Move ecosystem,  Pontem Network is developing an AMM infrastructure that features low slippage, low fees, speed, and security. Pontem combines both Curve stable swaps and Uniswap V2 for uncorrelated and correlated assets, respectively. Additionally, it will incorporate voting escrow tokenomics as a way to reward governance on the platform. Read more on the Pontem roadmap. At the moment, the first-of-its-kind AMM platform–LiquidSwap for Aptos is available in its test version.

This is some text inside of a div block.
5
min read
TECHNOLOGIES THAT DRIVE CONFIDENTIALITY ON THE BLOCKCHAIN
3
0
what-is-surve-finance
6305f6ff804b8f0742be2440
amb-what-is-surve-finance
Login
Thank you! Your submission has been received!
Oops! Something went wrong while submitting the form.
×