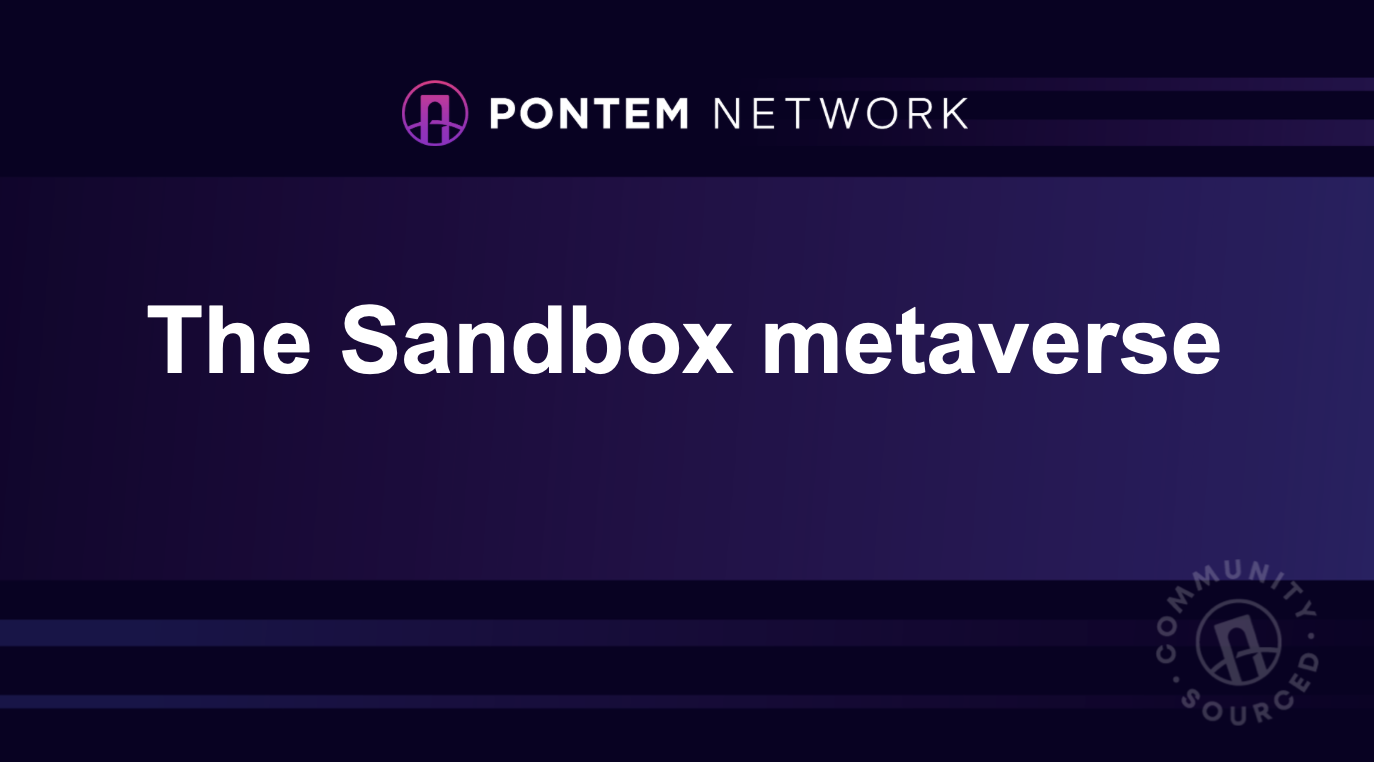 All of us have probably heard of the metaverse by now. It’s being talked about on the news, media personalities are advertising metaverse projects, and even Facebook has changed its name to Meta.

A metaverse is a network of 3D virtual spaces focused on social connection. In futurism and science fiction, it is often described as the next iteration of the Internet - a single, universal virtual world facilitated by the use of VR and AR headsets

About The Sandbox and $SAND

$SAND is a token used as the in–game currency in The Sandbox. It follows the ERC-20 standard on the Ethereum network, and the total supply of $SAND tokens is 3 billion. Players need to own SAND to play the game, customize their avatars, buy lands or exchange assets on the Sandbox Marketplace. Also being a governance token, SAND allows its owners to propose and vote for platform changes through the structure of a decentralized autonomous organization (DAO).

The Sandbox appears in the TOP 100 metaverses as an example of a "new world". Sales of digital land in the metaverse project exceeded $2 billion. Over the course of 2021, the number of land owners jumped by 375% to 19,000, while the overall number of The Sandbox users has reached 2.1 million. "They own a part of this new world and contribute to its creation," says co-founder Sebastien Borge about The users.

Major brands and celebrities are also involved in the project: in February, Gucci bought a large plot of virtual land for an undisclosed amount "to create an interactive shopping experience." Another example is HSBC, one of the world's largest international providers of banking and financial services, announced a new partnership with The Sandbox metaverse, "which will open up many opportunities for virtual communities around the world to interact with global financial service providers and sports communities in the metaverse."

Overall, The Sandbox has more than 165 partners, including the popular American rapper Snoop Dogg, the TV series "The Walking Dead" and "The Smurfs",Liberty City Ventures, Galaxy Interactive and Adidas Originals.

Major players, global brands, famous personalities- all th ese helped to attract more funds to the project and make the token more valuable. The value of $SAND often spikes upon the news about new partnerships and investors.

Partnerships are an important aspect of any blockchain project’s development. For example, Pontem Network (a developer of Move-based dApps for the Aptos chain) has more than 30 investors. Having received initial support from the Zug-based Wings Foundation and a grant from the Web3 Foundation,Pontem Network held a successful investment  round led by Mechanism Capital and Kenetic Capital, which also involved many well-known industry players, such as Alameda Enterprises, Delphi Enterprises, Animoca Brands, and

Sometimes metaverses flop: why did Huslverse’s $HUSL token lose more than -500% in a month?

The metaverse may be a hot trend, but it doesn’t mean that each and every project in the field becomes a success. A great example of what can go wrong is HUSLverse.

HUSL is a platform for authors. Initially, it was created as a global music market that allows people from all over the world to download the latest music in the form of NFTs, while the $HUSL token is used to purchase these music NFTs.

After reaching some traction with Husl, the team decided to expand into the  metaverse market and presented HUSLVerse, created with the support of Vulcan Forged. According to the devs, it was to become the main venue for some of the largest brands in the fields of music, sports, entertainment and fashion. Anyone would be able to buy land and build buildings on it to help create the HUSLverse ecosystem. In addition, the creators of the project announced that $HUSL would provide access to virtual events, conferences, meetings and hangouts, as well as exclusive events in their metaverse.

The new metaverse was also to feature P2E elements, rewarding users for playing and enjoying the HUSLverse ecosystem.

However, the project seems to have failed to attract the interest of investors or potential partners. You’ll find hardly any mentions of it in crypto media, and at the time of writing, even the  website was down

This had a harsh negative impact on the price: from  $3.9 just after listing, $HUSL dumped to $0.53 in just 43 days. You can track the real-time price here.

There was a short-lived pump in April 2022, when a group of investors apparently bought $HUSL in order to raise the price and slowly sell their tokens off to take money from the audience. The funds allocated for the purchase of $HUSL the market were allocated from the profits realized in the first days after the token listing.

HUSLverse gets almost no mentions in the media and seems to attract  very little interest among ordinary users.

Looking at numerous successful and failed projects, we can see how important it is to have both excellent technology and partnerships with well-known personalities and large companies. The metaverse is a place where everyone can build anything and be anything - but, as you’ll probably agree, it's more fun with friends.

Indeed, the most important thing for any project is the people, because a project is made for those who will use it. For example, Pontem Network has a well-coordinated team and an excellent community with constant involvement by the founders - as you’ll see if you join the  Discord. You can read more about the Pontem Network here.

This is some text inside of a div block.
5
min read
TECHNOLOGIES THAT DRIVE CONFIDENTIALITY ON THE BLOCKCHAIN
3
0
what-made-the-sandbox-metaverse-and-sand-a-success-and-why-the-huslverse-collapsed-2
630765b770434cc5393c5414
amb-what-made-the-sandbox-metaverse-and-sand-a-success-and-why-the-huslverse-collapsed-2
Login
Thank you! Your submission has been received!
Oops! Something went wrong while submitting the form.
×