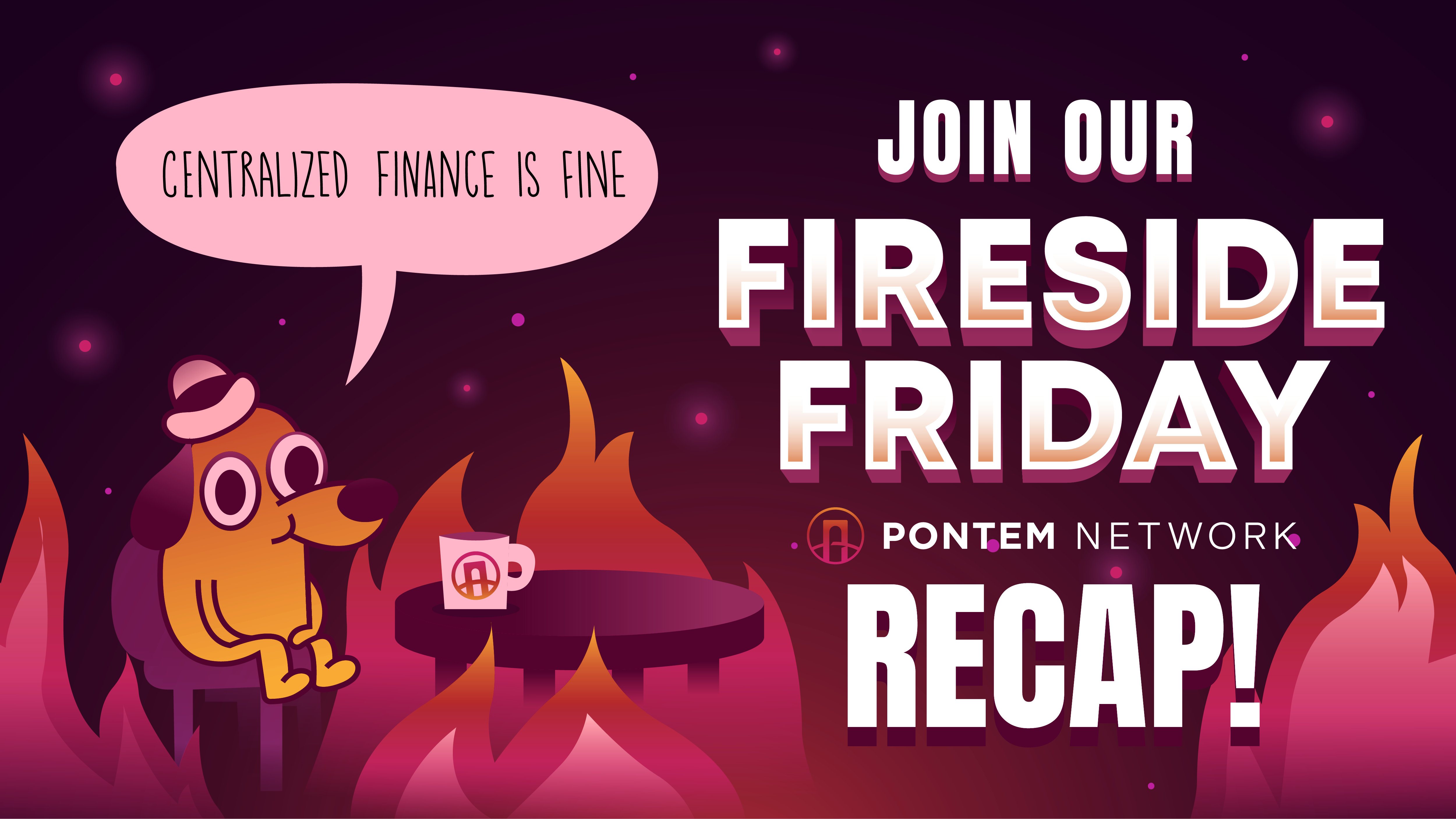 Welcome back to our Fireside Friday livestream! After a few weeks with guest interviews, this week we’re keeping things a little more chill and answering community questions.

This was the first of many, and we’re going to be doing more. I don’t want to drop too much alpha, but we’re aiming to create a full metaverse for Pontemites. There’s gonna be pirates and cowboys. The pirates are live now and there are only 1,000 of them. Keep an eye out potentially for space cowboys coming out.

We want to be inclusive for everybody, ambassadors especially. They’ve spent a lot of time and effort helping build this community. That’ll likely be the next NFT drop. It’s hard to do these fairly. We gave a lot of APT away to people; it wasn’t just an NFT drop. We were able to prevent bots from getting a lot of them. Hopefully, people like what we have done here. We’re going to create a whole universe, storyline, and plot. We want this to be a cool and engaging part of our community.

You might have noticed that the resources section on our website has more social activities, and people can now like, comment, etc. A little bit of alpha for the community: we’re going to be integrating social Web3 login with your wallet, so if you have one of these NFTs you’ll get special privileges to comment and post. We’ll be integrating more of these features into our own site. On Discord and other places where people hangout we can create special groups. The NFTs can even play a special role in some of the DeFi protocols we’re building. This is a great way to drive and engage a community. We tried to make it as fair as possible. Only Liquidswap users really knew about it, it was randomized, and it was basically a retroactive airdrop. Again, I can’t drop too much of what’s coming, but I can say this won’t be the last.

This hasn’t been publicly released, but we’re working on farms. Pretty soon you’ll be able to lock your liquidity pool tokens and get extra rewards for it. Ditto, one of the projects we’re working with, started doing farms for their own liquidity pool tokens on Liquidswap. We have other projects coming down the line that are reputable that you’ll soon be able to farm. More alpha: these NFTs will enable special features in some of these farms and other utilities that are digitally native. Keep an eye out!

We’re aiming to build several different products. Our wallet is already live, as is our DEX Liquidswap. We just launched some NFTs, so you can think of us as a product studio building several products, mainly on Move and Aptos. We have new and exciting features coming up for Liquidswap and the wallet. We’re going to have the first native integration of an application on the wallet, which will be going live relatively soon. Please give us feedback on the products we have out now so we can continue to improve them.

We’ll make a public announcement regarding it, but it’s very likely we will have a governance token.

We actually recently did an airdrop for Liquidswap users. We gave out NFTs and APT for 1000 random Liquidswap users. We know there are a lot of Liquidswap users, and hopefully, we will one day be able to give something to every user. We just can’t release any information on that right now. Airdops are just one way to reward early adopters, so keep an eye out for more. The community is definitely a large part of this and giving back to early users is a priority for us.

Check out the livestream on Youtube for a demo of the first in-app application on Pontem Wallet. It’s exciting because this hasn’t been done on Aptos yet. We’ve had a close collaboration with Topaz, the top NFT marketplace on Aptos, and the app for Topaz is essentially now live in the Pontem Wallet. So you can use Topaz directly from Pontem Wallet to browse and buy NFTs.

We take security very seriously. We’re doing several audits for our wallet, as we did with Liquidswap. The main thing you want to do is make sure that private keys are safe. We’re also going to be prioritizing the first Ledger integration, which is a new and exciting feature that is going to be coming out soon that other wallets in the ecosystem are not going to have. So if you want to be able to use your Ledger, which is a really popular hardware wallet,  we’ll have that live on Pontem Wallet soon.

I’m hoping that the wallet itself becomes a superapp as an interface for all of crypto. For now, we’re starting small with Aptos and Move, and you can see Topaz as being the first step towards that vision. We’re moving pretty quickly, and soon enough, you’ll be able to access all of crypto natively and trustlessly through your wallet. We’re definitely aiming to be a superapp where you can kind of just do everything in there.

We’re probably not going to be building our own lend/borrow products. We'll be working closely with other teams on Aptos who are doing it. Lend/borrow is a specific niche that requires a lot of risk management and teams that are experts in that. That’s why we’re going to be partnering up with teams who are experts in that, to bring you the safest credit products on DeFi. That will be coming soon natively, but we’re not building it ourselves.

It makes sense to provide access to several backend infrastructures, especially as we need to distribute the bandwidth if we do get to billions of users. I’d love to see Move being adopted on Ethereum. There’s definitely tradeoffs in terms of security assumptions or decentralization, so we want to give folks a chance to opt into their layer of choice. There’s also a lot of liquidity that’s native on Ethereum that our users could tap into. We’re definitely aiming to be multichain and I do think that’s thenext trend. We’re seeing these multichain messaging protocols like LayerZero and Wormhole start to gain traction, which will enable infrastructure for projects like us to build across multiple chains safely. Hopefully the community continues to grow through everything we’re doing, our products, our events.

I think the biggest asset that any project has is the community. The value and principles that the project stands for and the community that then follows it are the biggest factors,honestly. The best example of this is Ethereum and Bitcoin. They both have really strong communities that believe in the principles and values of those chains. The principles and values being decentralization and trustlessness, democratic finance, and accessibility of crypto primitives for all. I think some of those principles aren’t fully reflected in some of the newer chains, for example, Solana. I think there’s been a lot of fair criticisms of insiders getting special access and potentially unfavorable tokenomics to community members, which isn’t sustainable. We’ll probably see a lot of these projects deflate.

However, some of the strongest projects on Ethereum like Uniswap and AAVE, which do have these decentralized core principles, are strong through the bear market because the communities of these projects are strong. Generally, we’re aiming to have our community be our North Star, so that people can have confidence that what we’re building is for them and not insiders. If you’re looking for technical things, you can look at our architecture, like how Liquidswap is immutable.We don’t have upgradeability functionality. There’s no way we can upgrade the code and steal your funds. A lot of other projects have this function, which is a risk because you just have to trust the developers.

Thank you for joining us this week and asking all of your questions! Join us every Wednesday and Friday for our weekly livestreams, and keep up with the latest Pontem news by following us on  Twitter, and joining our Discord and Telegram Channel.