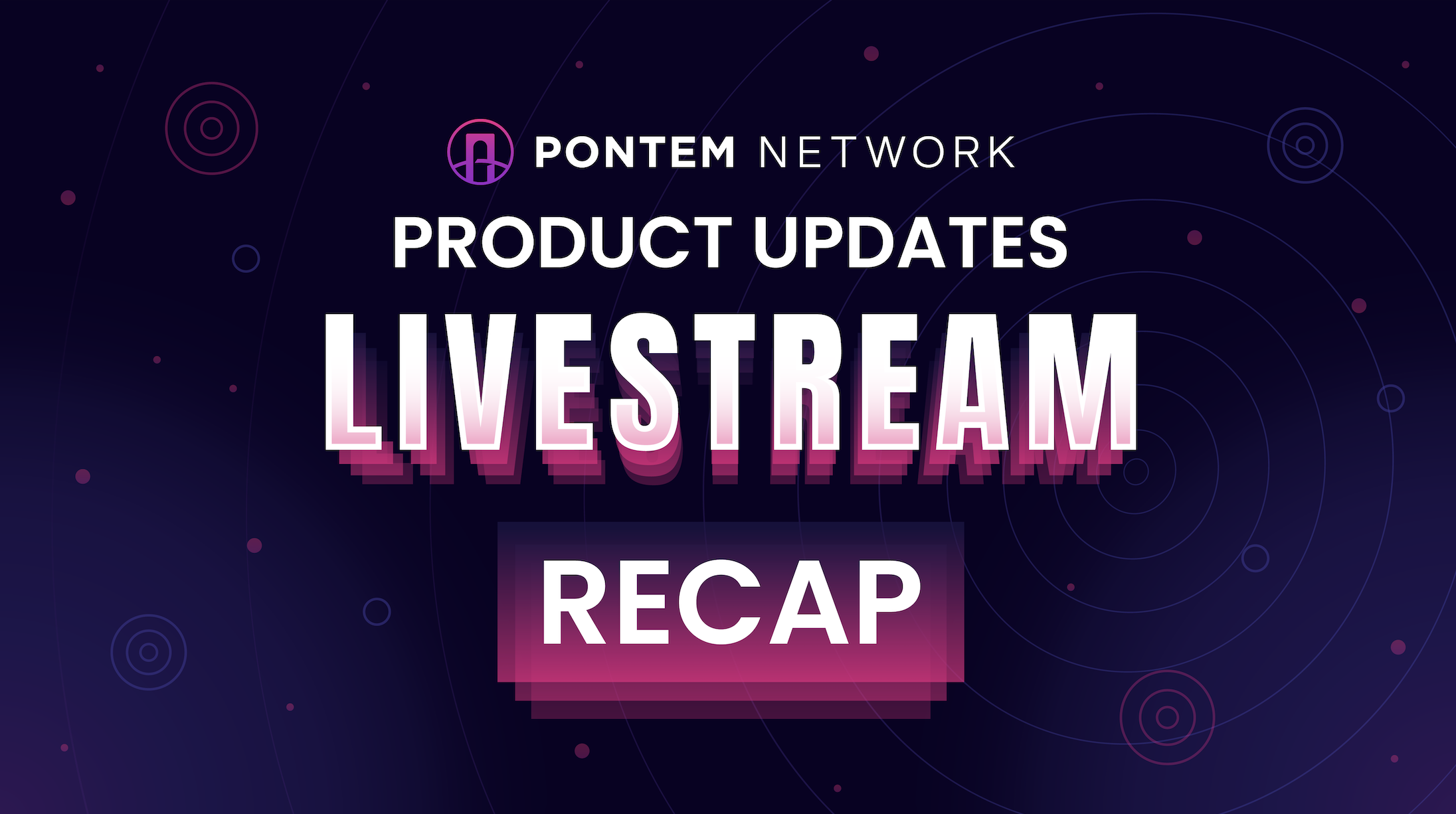 The latest community stream with the Core Protocol Contributor Alejo Pinto once again focused on security, from our ongoing audits to how Pontem selects partners to integrate the wallet with. Read the most interesting tidbits in this recap or check out the full video!

1. What are some of the security procedures and protocols that Pontem has in place to protect users?

The most important thing is audits. We’re being redundant with audits, with 2 different audits we’ve done and we’ll likely be doing a third. I recommend you listen to the livestream we did last week, we had our auditor Ottersec come on and give their thoughts and perspective on best practices. We are also planning for penetration testing on the front end to make sure that there are no central points of failure and that there won’t be governance attacks.

2. Are there plans to integrate NFTs more into Pontem products? For example, a direct marketplace, listing NFTs on the Pontem wallet, or an NFT marketplace of your own on the Liquidswap DEX website?

We definitely want to integrate more with NFTs, including in the swap protocol, or using them as access tokens for product features. The main asset type right now are fungible coins, or tokens, such as the Aptos token, that can easily be changed into non-fungible tokens. We’ll share more details with the community as we develop the ideas and put them on our roadmap.

3. Considering that security is the top priority for blockchain, how does the Pontem team plan to secure its protocols? What kind of precautions are you taking?

As I mentioned, the most important thing is audits, being redundant, and listening to security experts. I would caution people to just be aware of the contracts that you’re using as some of them might not be fully decentralized, which means there’s a central point of failure. You have to be sure that the contracts are immutable or that no one or multiple parties have access to change the code and essentially withdraw coins from the contracts. Just be careful - even if a dApp you’re using is audited.

4. What are your plans for cooperation with different projects and networks?

We definitely have core partnerships in the works, especially gettingour wallet integrated in as many Aptos dApp front ends as possible. Then more deeply tied integrations on the protocols as others start to use our swaps will be coming. Our protocols and everything that we’re building are completely open source. They’re permissionless so anybody can use it. We are being very careful and cognizant of the projects that we work with and promote or share with you all. We’re making sure they’re legitimate teams and not anonymous, that they’re auditing everything and have the best intentions in mind.

5. Which projects do you consider true competitors in the space? And what makes you different/better than them?

We’re vertically integrated, so we can work on all our products together and see the entire user experience. With our wallet, some people might be familiar with Martian. I would say we definitely have competitive advantages there because we’re differentiating for security features, some of our users, and then in the future more integrated apps.

For our swap functionality, there’s category competitors like central limit order books. Iconia, for example. However we do believe the constant function market maker is a better implementation and more capital efficient when done correctly.

On the VM side, I don’t believe we have specific competitors. Deploying the Move virtual machine is our core expertise. In the future, when the Move VM is deployable on other layer 1s, I’m sure others will try to come out and compete, but hopefully our experience, knowledge, trust, and the apps and products we built will help differentiate us.

6. Where do you think Aptos will be in the next 5 years compared to ETH, BNB Chain, or other top chains, and how does Pontem fit into this new ecosystem?

I do believe this is going to be a multichain world. Ethereum has already proved that they have staying power, and unless something goes terribly wrong with the merge (which seems unlikely at this point), Ethereum is going to be around for a long time. I think other top chains will also be around, and I think Aptos is definitely going to be one of those top chains.

There’s interoperability messaging solutions that enable bridging and cross chain contract execution. We’re aiming to build on top of these solutions so that as developers build with Move on other chains, there is an efficient way for the end user to also interact with these. We'll be deploying the Move VM where it makes sense, and where we think the biggest opportunity is in the top layer 1s.

7. Web3 has not yet fully built an efficient standalone system, but when it happens, Web2 will be a thing of the past. To achieve this, public trust needs to be built - not only for investors or technology-savvy individuals. In your opinion, how can you convince the public to be interested in Web3?

I don’t think this idea of Web2 will go away. We’ll still probably need centralized servers, though in the future everything could be decentralized and run on IPFS or on distributed servers that are not centralized to one cloud company. It’s possible even though I think we’re still pretty far away. I also would say that there are other technologies that enable Web3 - AI, contextual searches, IOT devices, phones, VR headsets are all examples of this.

I think what we’ll see is just an evolution of the internet and the tools that we use. Cryptocurrency or tokens that enable us to exchange value over the internet are a huge upgrade over what we could do previously. There’s this more fundamentalist radical view that everything should be decentralized including the servers and front ends. That could be a possibility in the future. I think it would take a paradigm shift in how we think and the companies that will be disrupted once we go there or they adapt or not.

8. How can the community contribute more to the project?

You can contribute directly by joining our ambassador program, that’s probably the best way.  Otherwise join our chats and get engaged, join our discord and our telegram and ask questions so we can answer them here in our AMAs.

9. What core values does Pontem Network have that will make it more relevant even as other projects flood in?

Our core values include an emphasis on security and decentralization, doing multiple audits, and scalability to a certain extent. There’s definitely a tradeoff but we do want to enable scalability, which is why we’re building on Aptos. I do want to prioritize security, and decentralization is closely tied to security, and then scalability. People should have a choice of how scalable they want to be and how much they trust the underlying assumptions of the layer 1s they’re working on. Transparency is also a core value in the sense of sharing everything that we’re doing, allowing you all to see and verify for yourself.

10. What are the most important and immediate goals for Pontem in 2022-2023? If you had a list of the top three key performance metrics, what would they be?

The most immediate priority is getting these three projects live:Liquidswap, a constant function market marker, and the wallet. The top performance metrics are going to be user adoption: daily active users, transaction volume, total value locked, etc. - and value being transacted through these applications. We want to make sure that we’re meeting the demand with sufficient supply and that there’s efficient marketplaces with enough order book depth so there’s good pricing and low slippage. On the user interface, the wallet, we want to make sure that users are happy with the experience and that they feel safe using it.

Pontem means bridge in Latin, and generally we’re bridging Web2 to Web3. For example, Pontem Wallet allows you to enter the Web3 world. We also think we’re bridging the EVM world to the Move VM world. I would say it’s like an abstract concept that can radically and liberally be applied.

12. How does the Pontem team spend their free time? Do you have any interesting team building activities?

We don’t watch movies together because we’re a very distributed team, although I guess we could theoretically. Each individual team member spends their free time doing different things, and we try to encourage them to take free time and vacations as much as possible. It helps keep the team healthy and in a good state of mind as they’re building with us.

13. Will there be apps for smartphones in the future?

Yes. If you take a look at some of the previous AMAs we’ve done we’ve showcased our mobile app, which should be coming soon. Keep an eye out for that, we’ll have a wallet on the iOS and Android store relatively soon.

14. Why did you choose Aptos and the Move language?

This question comes up often. We believe that Aptos is likely to be the best production-ready blockchain for applications that enables security, decentralization, and scalability, with scalability being the biggest differentiator. Right now, Aptos is touting over 100,000 transactions per second. We’re pretty bullish that it’ll be as scalable as or more scalable than Solana, without some of the congestion issues that Solana has experienced. The Move language itself is just really easy to work with, it’s really a paradigm shift over the EVM. You have a framework that looks a lot like typescript on top of Rust so it inherits a lot of the security and efficiencies of Rust by making it really easy for developers to build on, and really intuitive to do code reviews to really understand the business logic. So we just think Move is generally way better than what currently exists.

15. Will there be some kind of opportunity for smaller investors?

16. Will there be some kind of reward for joining your network?

Alejo: We’ll be releasing more information on admission rewards and other ways that early adopters can get rewarded in the future. So keep an eye out for that, we’ll be releasing more information on that soon.Don’t forget that weekly AMAs with Alejo Pinto take place every Friday. Join Pontem Network on Telegram, Twitter, and Discord so that you don’t miss the next livestream!