The History of Smart Contracts 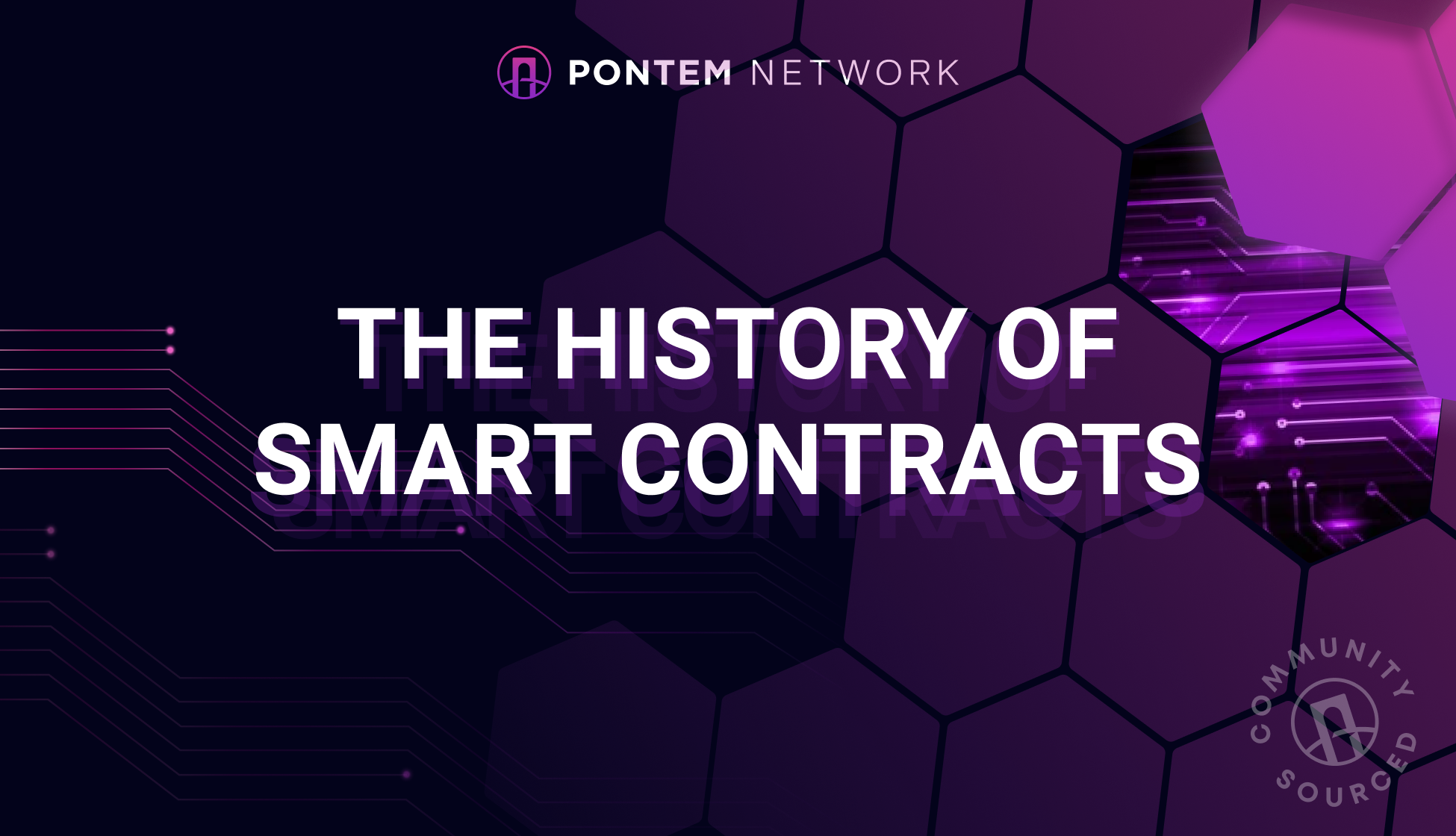 This article hopes to introduce the absolute beginner to smart contracts. We’ll explain their evolution, uses, benefits and future use-cases that smart contracts can potentially provide.

That may come across as difficult to believe, hence this article will divulge to you the history and evolution of smart contracts.

What are Smart Contracts?

How do transactions on blockchain execute themselves being decentralized and not controlled by any central party? It is simple – Smart Contracts.

Smart contracts are computer programs/protocols coded to self-execute on a command. These programs contain terms of agreement of buyer–seller written in lines of codes and exist within a decentralized and distributed blockchain network.

These smart programs are for automated transactions and the codes control the execution of transactions which are trackable and irreversible in response to the conditions set by a buyer and/or seller.

This explains how a user can place a buy order of 5BTC for example and blockchain works almost immediately to deliver the order.

The First Invention of Smart Contracts

During the 1990s,  Nick Szabo, a computer scientist and cryptographer, who had specialized in digital currency and protocols first put forward the idea of Smart Contract.

He talked about them as being a combination of computer codes that aids some applications and operations such as credit and payment systems and contracting that are secured by cryptography as Szabo was interested in designing legal and related contracts that enables e-commerce protocols.

As at the time Szabo gave these proposals, given the predominance of traditional financial services, it seems unrealistic as the technology needed to execute them wasn't in place by then since certain conditions must be met before the process is fully carried out.

An Advanced Level of Smart Contracts

Following the revolution in the technology of Blockchain, 2008 saw the appearance of Bitcoin, the first successful cryptocurrency in the blockchain space.

Bitcoin was not the first attempt at creating digital currency, but it was the first to allow users perform a peer to peer transaction that was secure and  decentralized.

There was a striking resemblance between the mechanism employed by the cryptocurrency transactions and the principles Szabo had talked about in the early 1990s. These sets of code used to implement the transactions were called “smart contracts”.

The Development of Blockchain

At the introduction of Bitcoin, it was faced with certain limitations such as the fact it lacked a decentralized ledger and could not allow for transactions to be concluded in a new block; yet the breaking of a new dawn had begun for smart contracts through its emergence.

With the increase in cryptocurrencies, smart contracts also ballooned along, yet the vision of Szabo was yet to be seen realized. Although the usage of smart contracts on Blockchain was limited despite the hope it brought, the concept of smart contrast became alive once more.

The Ethereum platform, unlike the initial Blockchain platform – Bitcoin, has an architectural design with unique layers that allow and strengthen new possibilities for businesses. Its programmability allows for easier, faster, more transparent and more secure smart contract use and accessibility, replacing the usual traditional contracts.

The evolution of Smart Contracts has birthed so many possibilities especially within the Blockchain ecosystem. Technically, they can be seen as a “Digital Agreement” with a combination of executable codes that automatically execute when necessary conditions are met.

Using blockchain technology, Smart contracts are now able to facilitate agreement between different parties without the need of a middleman, which significantly reduces transaction costs and aids more beneficial and profitable trades between people without any external influence.

Presently, the influence of smart contracts can be felt across many fields such as voting, healthcare, real estate, payment settlement, law, supply chains, government registries, etc.

The most appealing part of the present day smart contract is the ability to engage several parties in an agreement without fear of any party being able to alter or manipulate the transaction in their favor.

With a security system that works using the blockchain technology, one can be confident in how secure, transparent and unhackable these ‘digital agreements' can be when compared with the traditional smart contract.

With a foundation such as these, one can be sure of the efficient collaborations and new innovations within bodies that were otherwise thought to be impossible.

Since smart contracts are basically the structure on which blockchain was founded, there is no questioning the role these self-executing contracts play presently.

Smart contracts ensure transparency by taking away third-party involvement in transactions so nothing can be altered for personal benefits. Hence, there is a trust system restored to financial transactions as records are encrypted and delivered directly to receivers with no possibility of being tampered with.

Contracts are automated and delivered immediately at command. No paperwork is needed meaning no time is spent reconciling files to match them up and eliminate errors. Smart contracts perform these in seconds.

Programs and codes of transactions are encrypted and this makes them difficult to hack. Also smart contracts operate in a synchronized manner, linking on-chain current to previous records on a distributed ledger making it difficult to alter this chain.

Smart contracts save cost since there is an omission of intermediaries in handling transactions removing the need of fees to sort these intermediaries.

It has been over 25 years since Nick Szabo first introduced the concepts of smart contracts. Our devices have gotten “smarter" and "faster", coupled with the advancement in technology so far.

Virtually everything has gone online, enhancing the acceptance of the blockchain technology and the adoption of cryptocurrencies which has spread like wildfire in recent times.

But through all these technological advancements and shifts, smart contracts have been met with enthusiasm in the cryptocurrency sector as a digital means of interacting with blockchain assets.

As the acceptance of cryptocurrencies increases, its value increases.

Looking at the progress made thus far, one can say smart contracts have gone a long way in taking over from the traditional contract forms.

We can see its efficiency in blockchain and we can say that the future of smart contracts holds great potential.

Solana is developed using Rust and it is one of the fastest blockchains.

Move is inspired by Rust and is intended for smart contract development. Move redefines the rules in web3 development by merging simplicity and security. The Move language was developed by Diem. The primary distinction between Move and other programming languages is its usage of resources, which is based on the mathematical concept of linear logic.

Aptos is a blockchain created with the Move programming language. Aptos is developing a "Layer 1 for everyone" in order to introduce decentralized assets into the daily lives of billions of people. Aptos is developing essential breakthroughs like the Move language and the Diem-BFT consensus in order to offer the most secure, dependable, and scalable Layer 1 blockchain.

Its goal is to improve blockchain dependability, security, and performance by offering a dynamic and modular blockchain framework. This design allows for frequent updates, rapid acceptance of new technological breakthroughs, and first-rate support for new and developing use cases.

Using a consensus process, validator nodes make up the Aptos blockchain. The consensus protocol determines how transactions, including their output, are executed when it is implemented by the Move Virtual Machine.

Pontem and Aptos have collaborated to develop open source solutions on the Aptos Blockchain. Pontem is working with Aptos to establish a roadmap of dApps that will be deployed on the Aptos Blockchain, with technical assistance from the Aptos team and thanks to Pontem's upcoming Move VM implementation for Solidity, it will be possible to migrate Aptos dApps to other chains.

Beside building on Aptos, Pontem is committed to growing the deployment of smart contracts on Aptos. Pontem also provides tools and technical resources for developers to create smart contracts using a low-code tool and pre-made Move templates.

For more information on the progress of smart contracts and other developments on Aptos, visit https://pontem.network/ .