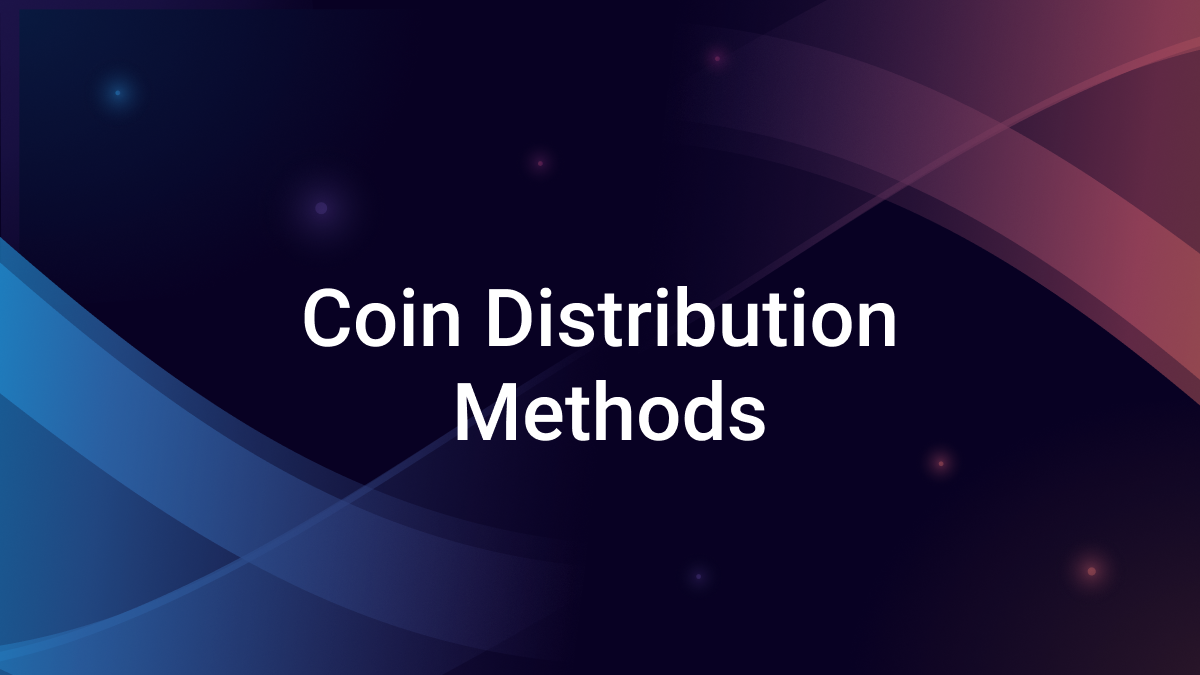 How do new projects like Pontem Network distribute their tokens?

When we talk about blockchain networks, you often talk about the “coins” or “tokens” which power them. The most famous example is Bitcoin, from the Bitcoin network. These tokens are the main stores and transmitters of value on blockchain networks, which enable them to be used as currency for transactions. As blockchain networks have evolved, tokens can now be used as stake for communal decision-making on Ethereum, to track file storage on Filecoin, or for voting rights in a video games like Axie Infinity.

But how do tokens get distributed? In order for a blockchain network to be used, tokens need to be spread amongst large numbers of active users. Not to mention, tokens often have monetary value or confer voting power, which can make for fraught debates over how they are allocated. Let’s break down the different methods of coin distribution -- and in doing so, the history of blockchain itself.

How did Bitcoin do the first coin offering?

The history of coin distribution, and the history of blockchain, really begins with Bitcoin. Satoshi Nakamoto anonymously created Bitcoin in 2009. To this day, Satoshi’s true identity is a mystery.

Bitcoin works using a process called “proof-of-work”. (More about that in this article.) Transactions on the network are verified by powerful computers solving incredibly complex problems. When transactions are confirmed, they are made into “blocks” and added to the

“chain,” an immutable ledger of past activity. This is where the word “blockchain” comes from.

What is Fair Launch distribution?

In order for Bitcoin to function properly, a large number of people had to be working on those problems to verify transactions. To incentivize that, Satoshi Nakamoto rewarded them with the network’s Bitcoin token. This is the Bitcoin cryptocurrency that has risen so much in value. The process of running computers to solve problems in order to get Bitcoin is known as “mining.” Since the amount of tokens you receive is determined by how many new blocks you create, this method is sometimes called “fair distribution” or “fair launch.”

What is an Initial Coin Offering (ICO)?

If you’re interested in traditional investing (Read here for more on the difference between this and decentralized finance.), you might have heard of an Initial Public Offering, or IPO. This is when a company’s shares are listed on a stock exchange for the first time to the public to buy and sell. This is a handy comparison for an Initial Coin Offering (ICO) when a blockchain networks coins are made available to users for the first time. However, ICO participants do not receive equity; instead, they get tokens. In an ICO, pre-existing or pre-mined tokens (or coins) are made available for sale to interested early investors. This gives a new network the user base needed to function properly shortly after launch.

The first ICO occurred in 2013 for the Mastercoin network (later called Omni). In 2014, Ethereum raised more than 2700 BTC in one day for its Initial Coin Offering. Ethereum’s design, using the pioneering ERC-20 token standard, made it far easier for new projects to launch new tokens using Ethereum as a template. This led to something of an ICO frenzy around 2017, with new projects arising constantly with coins to sell to investors. Many of these projects were short-lived or outright frauds, which attracted worldwide regulatory scrutiny. As a result, the Simple Agreement for Future Tokens (SAFT) was created as a standard ICO contract.

What is an Initial Exchange Offering (IEO)?

Following the ICO frenzy, new developments came about in coin distribution. One such method was the Initial Exchange Offering, or IEO. In this scheme, coins are put up for sale on a crypto exchange where investors could purchase them. It was a win-win for both the project and the exchange: projects created liquidity by making it easy to get coins and exchanges could reward premium customers with pre-access to new projects. Additionally, exchanges often have the existing infrastructure needed to make the offering go smoothly.

Due to regulatory reasons, IEOs mostly take place on crypto exchanges based outside of the US, usually in Asia. IEOs are not as common now, but do still take place regularly on platforms such as Binance. Projects like Matic (now Polygon) and Injective Protocol had very successful starts using IEOs.

What is an Initial Dex Offering (IDO?

Once you understand an IEO, IDOs are pretty simple. The D is short for DEX, or a decentralized exchange. A DEX performs similar functions to a crypto exchange, but in a decentralized way. Instead of transacting via a privately-owned (or sometimes publicly-traded) exchange like Binance or Coinbase, a DEX offers anonymous, non-custodial transactions. In this way, an IDO offers a coin distribution method that does not concentrate power in any one entity. Therefore, it is more in line with the vision and principles of decentralized finance (DeFi). For more on DeFi and alternatives to centralized finance, check out this article.

What are other coin distribution methods?

There are many other methods of coin distribution beyond fair launch, ICO, IEO, and IDO. In fact, they seem to develop as rapidly as the rest of blockchain technology. Let’s take a look at some newer strategies:

How do coin auctions work?

For projects that have generated demand before issuance, an auction can be used to distribute tokens. A type of auction called the “Dutch auction” is sometimes used on platforms such as CoinList. The seller sets a reserve price. Then sales are filled from the highest bidder down to the lowest until supply runs out. This continues until supply runs out or the reserve price is hit. Major projects such as Celo and Solana were launched using a Dutch auction.

What are Airdrops and Lockdrops?

Auctions, ICOs, and IEOs are effective issuance methods for projects that have already generated a lot of interest. However, with so many new blockchain projects constantly popping up, that isn’t always the case. If a project lacks significant buzz before launch, they might choose to “Airdrop” their tokens. This simply means sending tokens to new users to create a community and excitement around the project (as well as functionality and liquidity). The Airdrop might occur at a scheduled time with certain requirements to receive tokens, or it might even be unannounced, with random wallets receiving the tokens all of a sudden.

There are flaws to Airdrops. For one, many users do not become active users just because they receive tokens. In fact, they may not even notice they got them! The practice has also raised regulatory questions. Lockdrops arose as an alternative to Airdrops for those reasons. In a lockdrop, recipients are required to “lock” a certain amount of another cryptocurrency such as Ether for a period of time before the tokens are sent.  Though the user does not lose this money, they are unable to access it for the length of the lock. This acts as proof of their interest in the new project and suggests they will participate more actively. The first lockdrop was done by Commonwealth Labs for their Edgeware network.

What role does venture capital play in coin distribution?

It’s increasingly common to see venture capital (VC) firms participating in new crypto projects. In many cases, early-stage blockchain projects need significant upgrades before launching publicly. A VC firm can offer the money and experience needed to help get a project ready. This support might include investing in the team, advising on whitepapers and documentation, or generating publicity. A VC firm will often receive vested tokens in exchange. They will also probably get equity in the project, which is a major difference from a standard ICO.

How will Pontem Network distribute our coins?

Great news: Pontem Network is planning for an eventual public launch of our own tokens in the future!

While we have to keep the details under wraps for now, we are considering all of our options for initial distribution. We’re researching everything mentioned in this article, and even some ultra-cutting edge options that we could not get into here! Follow Pontem Network on Twitter and Telegram to stay up to date. And for more crypto knowledge, follow us here on Medium.