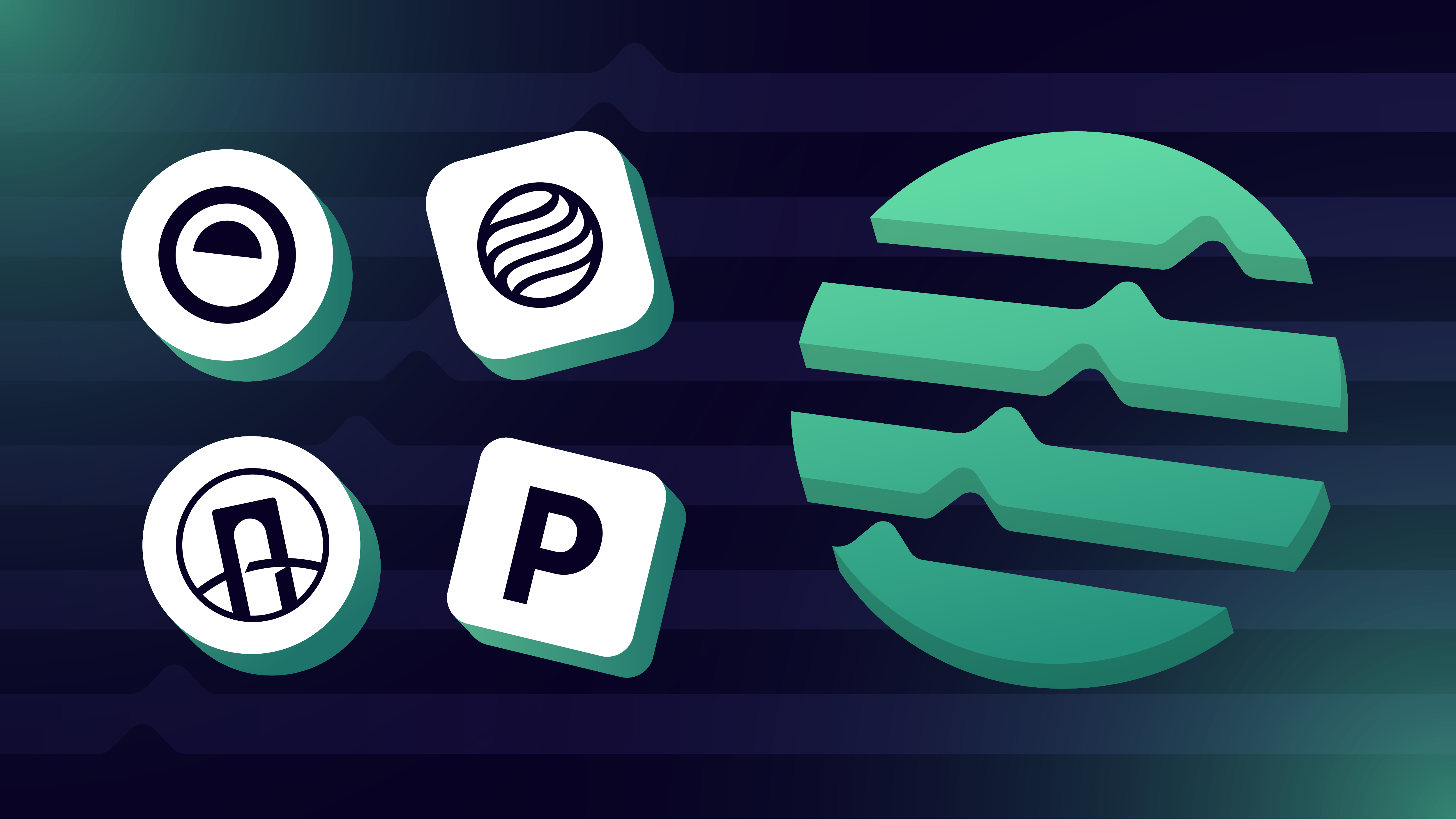 Your wallet options for the Aptos blockchain

Have you heard of Aptos? If you haven’t, it’s time to study up, because Aptos is the most exciting new blockchain in crypto.

Developed by former Diem engineers, Aptos is built for industry-leading speed, security, and scalability (the three most important aspects of a Layer 1 blockchain). Aptos is built on Move, a new blockchain language that is both safe and extremely efficient.

Aptos is still only in its testnet phases, but the mainnet launch is expected in Autumn. Since Aptos is its own Layer 1, existing mainstream wallets like MetaMask are not compatible yet. But in order to meet the massive demand for Aptos, numerous wallet options have already been launched, including our own Pontem Wallet.

In order to do just about anything on the blockchain - be it sending money, earning yield through DeFi, collecting NFTs, or whatever else - you need a wallet. A crypto wallet functions like your decentralized bank account, maintaining your account balance and enabling transactions.

There is a key difference between a crypto wallet and a bank account, though. With crypto, your money is not actually held anywhere; it lives on the blockchain, which is decentralized and transparent. The system operates through the use of public and private keys: long strings of numbers and letters which identify you and your holdings to the rest of the network.

Crypto wallets manage both of these keys, simultaneously facilitating transactions with your public key while keeping your private key safe. There are two main types of crypto wallets: cold wallets and hot wallets.

The Aptos-native wallets in this article are all software-based hot wallets. These wallets are all tailor-built for Aptos, the new Layer 1 blockchain based on the Move programming language. Aptos is poised to be the fastest, most scalable, and most secure blockchain on the market. It is currently in a testnet phase, but the full public mainnet launch is expected by the end of 2022. These wallets offer an entry point to explore the testnet and prepare for the mainnet launch. The wallets we will be covering today are our own Pontem Wallet, Petra, Martian, and Fewcha.

Pontem, Martian, Petra, and Fewcha: Aptos wallets at a glance

Pontem Wallet was the first production-ready wallet for Aptos. Available on the Chrome Store, the extension is a great way to interact with the Aptoverse. Currently connected to the Aptos testnet, Pontem Wallet can be used for swapping APT tokens and any future assets available on the mainnet.

Like all Pontem Network software, the wallet is deeply audited to ensure user safety, with a simple user interface that works the same as your other favorite wallets. Plus, the wallet is non-custodial, meaning every transaction occurs through trustless smart contracts and only you have access to your private keys.

Creating a new Pontem Wallet works more or less the same as in other popular non-custodial wallets: you’ll need to save the secret recovery phrase and create a password. The first thing to do with your new wallet is to request free tokens using the Faucet feature on the main screen. Once you have some devnet Aptos tokens, you can try sending them to another Aptos wallet address.

The most interesting feature of Pontem Wallet is its integration with Liquidswap, the premier Automated Market Maker for Aptos. This first-ever DEX for Aptos was also built by Pontem, Aptos’s leading partner in developing foundational dApps. As of August 24, it already has over 120,000 unique users, with an average of 4,000 unique swap transactions every day.

To use Liquidswap directly from the wallet interface, click on Buy, then connect the wallet to the DEX. Currently, you can swap between APTOS, USDT, and wrapped BTC. The DEX has its own faucet, where you can request devnet USDT and BTC.

Since everything happens on the devnet, relative prices can change fast - for example, 1 APTOS can be worth over 300 USDT. You’ll need to confirm (register) both assets first, and then execute the swap. To see the resulting USDT (or BTC) balances in Pontem Wallet, import them using the following addresses:

You can also add liquidity to the APTOS/USDT, APTOS/BTC, and BTC/USDT pools. Soon, swaps should be integrated natively into Pontem Wallet, so that you won’t even have to use the separate DEX interface anymore. The team is also considering native integrations of other DeFi functionality, such as liquid staking.

Finally,  you can connect Pontem Wallet to the two major NFT marketplaces on Aptos: Topaz and Souffl3.

Petra is a browser-based wallet made by the Aptos developer team itself. (It was not always called Petra, so you may see references to it as simply “Aptos wallet” or something similar.) The wallet was designed for the testnet and includes all of the basic functionality needed to start exploring Aptos, including transacting with test coins, creating NFTs, selecting networks, and connecting to dApps. This makes it an ideal wallet choice for Aptos Incentivized Testnet participants. You can install Petra from the Chrome Store here.

Petra’s interface is basic and functional. You can request free APT from a faucet, send tokens, and view the activity log.

The Settings tab allows you to visualize the secret recovery phrase, add a new account, rename the wallet, or switch between the devnet and the testnet.

Petra is already integrated with the Souffl3 marketplace, and it allows you to mint your own collectible right within the wallet. First you’ll need to upload the metadata (image, music file etc.) to IPFS, Arweave, or Amazon S3, and then name the collection and the token.

Martian is another non-custodial Chrome extension wallet, though an iOS app is also in the works. It can interact with websites via Javascript and offers the ability to mint demo NFTs. Martian is backed by Toy Ventures, Aptos Labs and others.

The wallet creation process is similar to Pontem Wallet. A handy feature is being able to visualize the secret phrase in the Settings tab, where you can also change the password, see the list of sites you’ve given Martian access to, and rotate the key pair for added security.

To receive free devnet tokens, use the Airdrop button. You’ll get 20,000 APT at a time. Repeat this process several times in a row to accumulate larger amounts of APT – 100,000, for example.

The best use case of these devnet tokens is to buy NFTs on the two marketplaces for Aptos, Topaz and Souffl3. You can connect to both using Martian.

If you do want to test NFTs on Aptos, you can use Martian to mint yourself a Web3 identity at Aptos Names, a service similar to ENS (Ethereum Name Service). Connect the wallet, search for a name you like, and if it’s available, approve the mint. It’s free, apart from a small gas fee (13 APT). The NFT will appear in Martian’s NFT section.

The cleverly named Fewcha is another wallet, which can be used as either a Chrome extension or iOS app. Its security bona fides are enhanced by an independent audit from Verichains Lab. Their roadmap lists a Firefox extension in the future as well.

In Fewcha, the Faucet feature is hidden in the dropdown menu in the top left. You’ll receive an impressive 500,000 APT at a time, and you can use the faucet multiple times in a row.

Just like Martian, Fewcha allows you to fetch your secret recovery phrase and change the password in the Settings tab. You can also switch between the devnet and the testnet, though the latter is far less useful since you won’t have access to the free token faucet.

Also in the Settings, you’ll find an Address Book, where you can add Aptos wallet addresses of your friends - or your own, if you also use Pontem Wallet, for example.

This generous faucet can seem like a good solution if you want to test swapping large amounts of tokens on Pontem’s Liquidswap or buy an NFT using the Martian wallet. However, free APT tokens often disappear from the balance, and we got an error message whenever we tried to send APT from Fewcha to Pontem, Martian, or Petra wallet during our testing.

Meanwhile, sending APT from Pontem or Martian to Fewcha seems to work (the transactions listed as confirmed on the Aptos Explorer), but the tokens don’t appear on Fewcha’s balance.  These errors have been reported by several users in the Fewcha wallet Discord, so hopefully this will be fixed in the upcoming releases.

Fewcha recently announced an integration with the Topaz NFT marketplace. However, as of the time of writing, it wasn’t yet possible to connect the wallet to Topaz, though you can already connect it to Souffl3. Fewcha’s NFT tab also has a feature called Claim, but it doesn’t seem operational at this time.

All the wallets we’ve analyzed are still early releases with limited functionality. In the next few months, we will probably see Pontem Wallet, Petra, Martian, and Fewcha add more features - especially once Aptos launches its mainnet. Other wallets will also probably appear, so we will update our comparison regularly. We’ll be grateful for your personal feedback on using Pontem Wallet and other wallets for Aptos - please share here in the comments, on Twitter, or on Telegram.