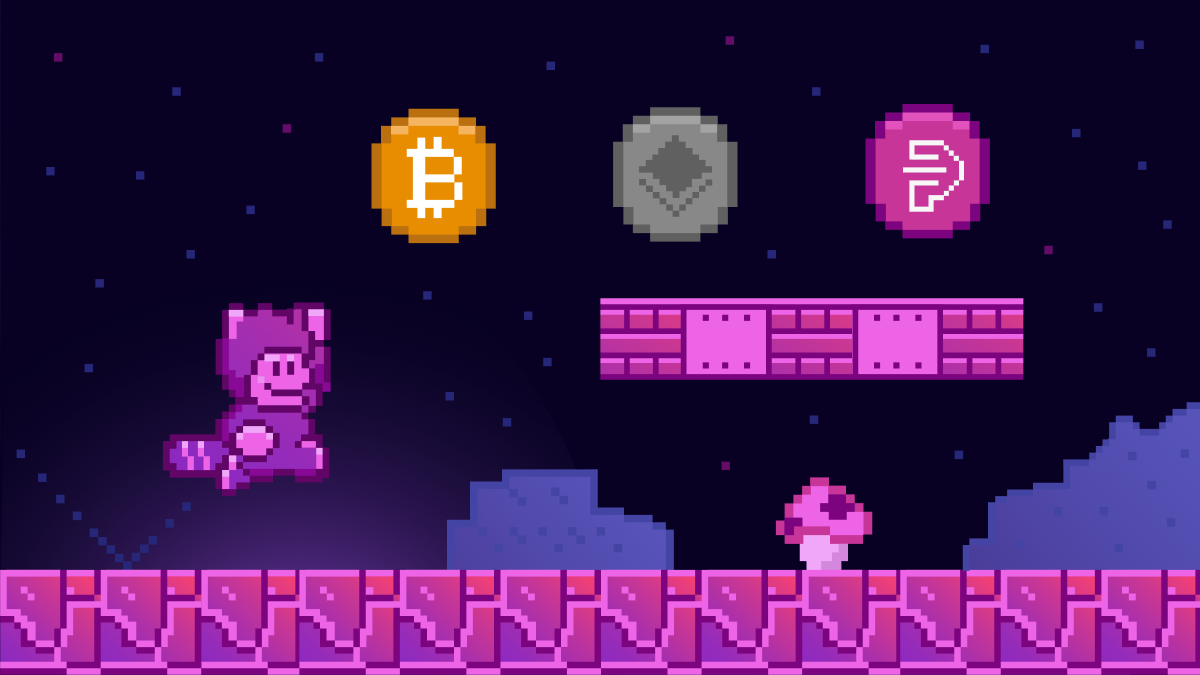 If you’re at all active in the crypto space, you’ve definitely heard of these blockchain video games. With hundreds of thousands of users and millions of dollars in volume, play-to-earn games are some of the fastest growing projects around. But what is a play-to-earn game? And why are they amassing so much attention and money from the community? Don’t worry, we’ve got all the answers about play-to-earn gaming.

What is a play-to-earn game?

There are two key elements that define a play-to-earn game:

In a play-to-earn game, your main character or avatar is an NFT, which can be bought, sold, and traded like any other non-fungible token. Whereas traditional games might have characters or skins which are purchased with in-game “money,” play-to-earn games use completely unique, non-fungible avatars which are valued in crypto. For instance, in Axie Infinity, players buy and trade their Axie characters as NFTs. (For the basics on NFTs, check out our explainer.) You might think of it like Pokémon, except the characters are one-of-one, and valued in cryptocurrency instead of Pokébucks. Virtual characters being bought with real money and secured by the blockchain. This is a great example of the metaverse: the bridging of digital and physical reality.

Blockchain networks are powered by tokens. Typical blockchain networks might distribute tokens through mining, ICOs, or airdrops. (For more on this topic, check out our coin distribution article.) But in play-to-earn games, tokens are distributed through the gameplay. Many traditional video games have an in-game reward mechanism (think coins in Mario, or XP in a RPG), but play-to-earns step that up a notch. Achievements result in players receiving usable tokens, which can be exchanged like a cryptocurrency.

That’s right: you can actually make money playing video games! And you don’t even need to be an esports champion.

How did blockchain gaming start with CryptoKitties?

It’s difficult to say which blockchain game was the true original, but there’s no doubt that CryptoKitties was the first to take off in a major way. In fact, CryptoKitties is even called “one of the earliest attempts to deploy blockchain technology for recreation and leisure.” The game was launched in 2017 by Dapper Labs. CryptoKitties are one-of-a-kind cartoon cats, secured by ERC271 tokens. This means each CryptoKitty is non-fungible and completely distinct. The design of the avatar is determined “genetically” by breeding CryptoKitties to give them unique features. This combination of traits is stored immutably by a smart contract.

CryptoKitties can be bought and sold on a designated marketplace, as well as NFT marketplaces like OpenSea. The native currency is Ethereum. Though the game’s popularity peaked shortly after launch in late 2017 and early 2018, this past month saw 2100 active users and $1 million in volume. While CryptoKitties was the first popular game to use NFTs, true play-to-earn gaming did not take off until Axie Infinity.

Why is Axie Infinity the biggest play-to-earn game today?

According to PlayToEarn.net, blockchain gaming is seeing 24 hour volumes of around $25 million. So which games are dominating this massive market?
Axie Infinity is by far the most popular play-to-earn game. Axie Infinity truly revolutionized blockchain gaming, by adding token distribution through gameplay onto the CryptoKitties template of NFT ownership. Now, that model is the blueprint for play-to-earn games.

Axie Infinity has found tons of traction globally and on social media. The game has more than a million daily user and massive trading volume, with an incredible $900 million in trades this month! This frenzy has pushed Axie Infinty into the stratosphere: it’s the first NFT game to reach $1 billion in sales. To play, users purchase a starter set of three Axies using Ethereum. They can now start playing to earn Smooth Love Potion (SLP) tokens. SLP is earned by winning battles and completing quests, and is needed to breed your Axies. There is also an active market for SLP on Binance and Uniswap, which is a major way that Axie Infinity players earn money with the game. There is a second Axie Infinity token called Axie Infinity Shards (AXS). AXS is the governance token for Axie Infinity and can be staked to earn more. It can also be used to purchase Axie NFTs. AXS is also traded on Binance and Uniswap.

What are the benefits of play-to-earn gaming?

Gamers are used to working hard for XP or other in-game currencies to spend on accessories, power-ups, or other improvements. They may even have exchanged real money for an in-game currency. Play-to-earn games are different. They operate in real-world cryptocurrencies and blur the distinction between in-game and real life, which makes them into true metaverses. The end result is that your efforts in the game translate to actual value. Check out this video on Axie Infinity in the Philippines, where players are using the game as an income source during Covid-19.

In a typical game, the price, amount, and tradability of assets is controlled by the game’s developers. Some items can only be found or won by completing a certain challenge. These are all methods of creating artificial rarity. Play-to-earn games operate on decentralized blockchains and the characters and accessories are traded as NFTs. This means they can all be traded peer-to-peer. The protocol collects a small fee on these transactions (Axie’s fee is 4.5%) which is reinvested in the game’s development.

The decentralizing power of blockchain also applies to the gameplay itself. Since the games are powered by blockchain networks, they are less dependent on the developers and more resilient to server crashes than traditional video games. In addition, many play-to-earn games intend to be controlled by Decentralized Autonomous Organizations (DAOs). A DAO is an automated voting system powered by the blockchain which allows token holders to collaborate on the future of the network. That means that instead of developers unilaterally issuing updates, altering gameplay, or changing the game in other ways, the community has a say. This would truly be a revolution in gaming, as it would invert the balance of power in favor of the player. In Axie Infinity, the AXS token is used for governance. Players can also stake AXS to earn more.

An interesting use case of DAOs in blockchain gaming is Yield Guild Games. YGG combines DeFi and gaming by investing in NFTs from many different play-to-earns, including Axie Infinity and Sandbox games. YGG issues its own tokens and is managed collaboratively through a DAO.

What are the downsides of play-to-earn gaming?

The play-to-earn world is extremely new. Remember that the first one only launched in 2017 and many of the most popular are barely a year old. While this will probably improve over time, some users complain that the current quality of play-to-earn games pales in comparison to traditional gaming. This is reasonable, especially when you consider how expensive it can be to start playing the popular play-to-earns. (A typical starter set of three Axies might cost more than $1000.) Hopefully, the incredible attention and spending that’s gone into play-to-earn gaming will lead to more investment and larger development teams creating better games. Video game studios spend hundreds of millions on major releases; as play-to-earns get more and more popular, we might see that level of investment enter the industry to create top-quality metaverses.

Whenever we talk about crypto, price fluctuations and bubbles are quick to come up. The rapid rise (and occasional fall) of prices is why cryptocurrencies and NFTs have become such a hot topic in the investing world. Unfortunately, play-to-earn games are not immune from these hype bubbles. As said above, Axies (as well as the AXS and SLP tokens) have become very expensive very quickly, and the same is true for other play-to-earn games. This high barrier to entry can make it difficult to recoup the investment by playing the game. There are even Axie “scholarships” which will give people Axies in exchange for a portion of their in-game earnings.