Crypto Market Volatility: Bull traps and bear traps explained + 5 tips on how to avoid them 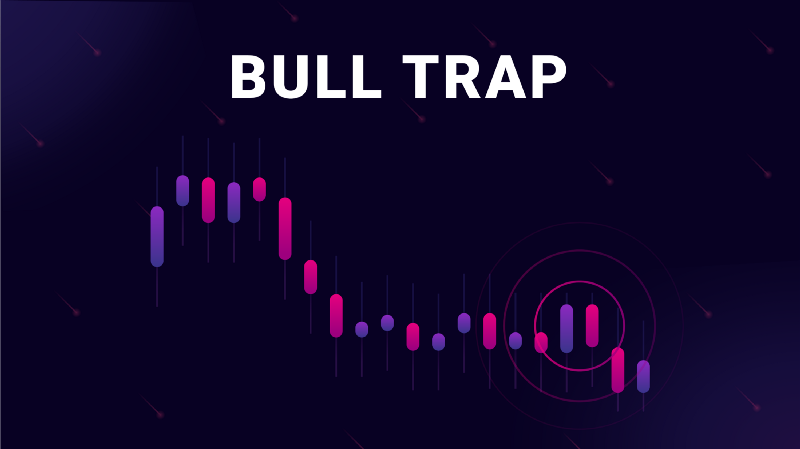 In crypto trading, bull and bear traps are strong up or down price moves followed by an unexpected reversal. It’s easy to get fooled and jump into a trap, hoping for large gains -only to end up with losses. In this article, we’ll explain how bull and bear traps work and how to recognize them early.

What is a bull trap or a bear trap?

A bull trap is a short-lived upward price move during a downtrend that wrongly convinces traders that a rally is about to happen. They buy in or open long positions — then get trapped and sustain losses when the price starts to go down again.

Conversely, a bear trap happens when the price suddenly starts dipping fast, making people think that the trend is turning bearish. Once they sell the asset or (worse) open leveraged short positions, the price stops falling and goes up again.

Psychology plays a big part here: if someone believes that the price should go up and desires for it to happen, they are more likely to jump in once it seems like it’s happening, without stopping to analyze other indicators or wait for confirmation. This is known as FOMO, short for ‘fear of missing out’.

How long can a bull or bear trap last?

Traps can develop over several days — or be over within an hour. The shorter ones are more likely to be orchestrated by market-makers or caused by sudden events, such as Elon Musk tweets.

On the screenshots below (1-hour time frame) you can see both a bull trap that took seven hours to unfold and a very suspicious bear trap that looks like a single green candle with a tiny body and a very short wick. What this means is that the price took a deep dive, then fully recovered and even went a bit higher — all within an hour.

If we zoom into the 5-minute view, we can see why a lot of people were fooled: the dip was really violent (the volume was relatively high, too, though it’s not shown here).

How bulls and bears lose money during traps

As we’ve said, psychology is crucial in trap formation. When a trader enters a position as the price is already close to the top of a bull trap, they may see it go a bit higher and become convinced that they’ve made the right choice. The attachment is even stronger if the trader has missed the previous few pumps and is eager to make a profit, or if the price has been trending down for a while, so a rally seems to be in order. The slang term is ‘to FOMO into a trade’.

Once the price stalls and starts to inch down slightly, the user — who is now attached to their trading idea — is reluctant to let go and sell. They think, ‘It’s just a tiny pullback before the next leg up’. The price starts to go down more decisively — and still the trader doesn’t sell. Finally it drops so much that the trader is ‘stopped out’ -that is, forced out of the trade because the price hits their stop-loss setting. (Stop-loss is a special price value that triggers a closure once hit to limit the losses.)

Things get even worse if one trades with leverage. Using a bear trap example for a change, imagine that you expect the price to go down — and finally there it is, a signal for an upcoming dip.

You open a short leveraged position, borrowing assets from the exchange. For instance, if your own deposit is 0.1 BTC, you might borrow 0.9 BTC for a total leverage of 10x (10 times the deposit). Then you sell those Bitcoins (read more on shorting here) and wait for the price to go down so that you can re-buy cheaper, return what you owe to the exchange, and keep the difference.

Only that’s not what happens. The price suddenly reverses, and you are faced with a tough choice: either place a buy order at once to take a small profit or break even, or wait in hope of more downside. If you choose the latter and the price keeps going up, though, you risk getting liquidated: the exchange will forcibly close your position, and you’ll sustain a big loss. The higher the leverage, the less the price needs to move for a position to get liquidated. Most traditional hedgefunds trade within 1–2x leverage which is why cryptomarkets can be very volatile by comparison.

Most traders choose to cover their short positions, i.e. to buy back the asset and close the trade. This buying pressure pushes the price up even more, liquidating more shorts. This pattern is called a short squeeze and is very common in the Bitcoin market.

Who is behind bull and bear traps?

A lot of traders and analysts believe that the crypto market is heavily manipulated, so many (if not most) of the bull and bear traps are orchestrated by the big players:

When a trap happens in the Bitcoin market, large altcoins usually follow, so if you invest in assets like ETH, DOT, XRP, and so on, it’s worth keeping track of BTC traps. If you look at the charts for BTC and DOT, you’ll see the same pattern of recent traps:

How to avoid bull and bear traps: 5 tips

A lot of bull traps fizzle out once they hit a strong resistance level (a value above which the price has trouble going because a lot of traders are willing to sell at that price). Unfortunately, beginner traders tend to jump in close to the peak, driven by FOMO (the fear of missing out). If you’ve missed the start of the pump and the price is already close to resistance, it’s better to wait and see what happens next.

Technical analysis boils down to analyzing past price action to make probabilistic assumptions about the future direction of the market. It can seem daunting and uber-complicated, but you don’t need to know it all. Learning to find the support and resistance levels, recognize simple patterns like wedges and patterns, analyze the volume and moving averages, and find RSI (Relative Strength Index) divergences can make a huge difference and won’t take you months to learn. The classic series of YouTube lectures by the technical trader known as @CryptoCred is a good place to start.

Many crypto YouTubers have been accused of making money on pump and dump schemes. They buy altcoins while they are cheap, promote (shill) them to their followers to generate a pump, and sell high. The altcoin invariably dumps, and the cycle begins again with a new meme coin. For example, BitBoy Crypto has been found to hold very few of the coins he promotes — but a lot of cash, which is an indicator that he dumps his coins on his 1+ million followers. In another recent scandal, a YouTuber called TechLead was found to run a multimillion pump-and-dump scheme on Uniswap.

Such ‘influencers’ will often say that BTC or ETH is going to the moon or is about to dump in order to attract views and generate the FOMO or FUD (fear, uncertainty, and doubt) necessary for their pump-and-dump schemes to succeed. Twitter user @bitcoinpasada summed it very well:

Real trend reversals happen with good volume across several candles (time periods). A sudden pump with weak volume points to manipulation and a lack of confidence among retail buyers. For instance, June and July 2021 were full of traps, while volume remained weak.

5. Watch out for suspiciously big candles

In fact, the image has become so iconic in the crypto community that it’s worth knowing its origins. The person in the picture is Igor Bogdanoff, a French TV personality born in 1949. Igor and his twin brother Grichka were real heartthrobs until they got too much into plastic surgery. They produced and starred in various sci-fi and scientific shows and even wrote (or, rather, stole) some theoretical physics papers. They are at the center of many conspiracy theories: some believe them to have psychic powers and secretly rule France.

The Bogdanoffs have nothing to do with crypto, but in 2018 crypto content creator Bizonacci made a video (using a clip from one of their shows) in which Igor responds to a phone call saying, “He bought? Dump it.” This causes the Bitcoin price to crash and the protagonist trader to get ruined.

Frequent bull and bear traps are a logical side-effect of the unregulated, manipulated, and immature character of the crypto market. Sometimes you can have several traps in a week — yet every time, there are thousands of traders who fall for them. The best that retail traders and investors can do is learn to recognize such short-lived trends and not fall for them — and we hope that our tips will help you do that.

This is some text inside of a div block.
February 1, 2023
8
min read
How to Do Your Own Research (DYOR)
0
crypto-market-volatility-bull-traps-and-bear-traps-explained-5-tips-on-how-to-avoid-them
61015ab4f0f03323784b704f
amb-crypto-market-volatility-bull-traps-and-bear-traps-explained-5-tips-on-how-to-avoid-them
Login
Thank you! Your submission has been received!
Oops! Something went wrong while submitting the form.
×