No-Code Technology: Is it the Future of Blockchain? 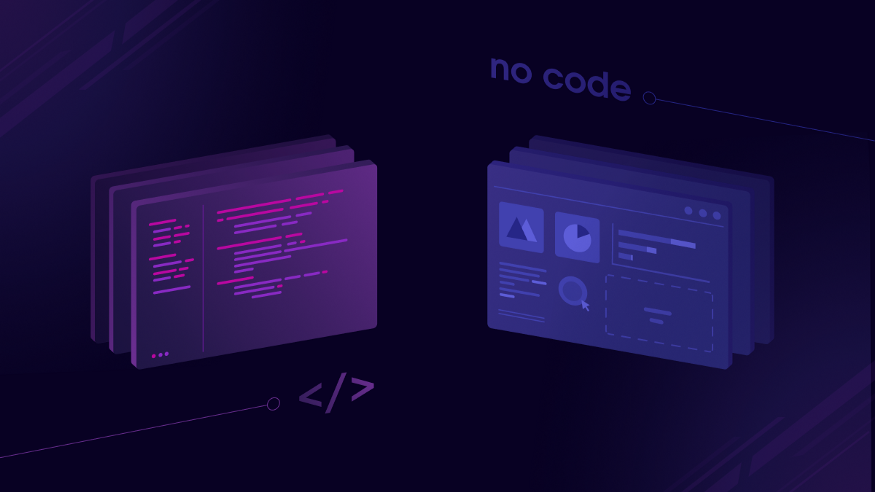 Albert Einstein once said, “The definition of genius is taking the complex and making it simple.”

In every field, innovators strive to create simpler, cheaper, and easier-to-use technology. Blockchain is no exception. As the blockchain space expands and grows, people are looking to expand its user base and implement blockchain in more varied use cases. For this to happen, developing blockchain tools needs to be accessible and affordable. That’s why more and more no-code platforms are being created for blockchain. So what is no-code and how can it benefit you? Let’s find out.

What is no-code technology?

No-code or “zero-code” platforms are tools for building apps without coding knowledge or other hard technical skills. It is also sometimes referred to as “visual programming.”

With no-code, you don’t need any special knowledge or skills to create an app. A no-code development platform allows you to simply select what you want your program to do; the backend coding required is done automatically. In this way, no-code allows everyone to make software, and not just highly skilled developers. Some no-code technologies are known as What You See Is What You Get (WYSIWYG) because you can see the outcome of your work in real time.

A number of no-code and low-code platforms are widely available and quite popular, because they simplify complex tasks. You’ve probably heard of website constructors like Squarespace, Wix, or Universe. These applications allow you to create and customize your own website, a task which once required a great deal of specialized expertise. Other popular no-code platforms are the email marketing service Mailchimp, workflow manager Notion, and Airtable, an app development tool.

What’s the difference between no-code and low-code?

No-code (or zero-code) and low-code refer to the amount of programming required to create an application on a given platform. (You may even see these terms used interchangeably.) Low-code platforms might mean the platform requires a bare minimum of coding knowledge or that it offers the option to manually code more advanced features. Low-code is intended for both regular users and professional developers.

No-code tools give predefined templates with no coding required whatsoever. For that reason, no-code tools are more likely to use visual programming. This is sometimes called What You See Is What You Get (WYSIWYG) tools, because you monitor your work in real time instead of executing textual code. No-code tools are more suitable for ordinary users as they require very little training.

How did no-code technology start?

The first no-code services were launched back in the 1990s. As personal computers became exponentially more popular, there was huge demand for tools that could be used by everyone, regardless of your background. Many of these early no-code tools pioneered visual programming, in which programming is done with graphical objects, rather than textual code.

One of the most popular early no-code platforms was Dreamweaver, developed by Macromedia in 1997 and later acquired by Adobe. Dreamweaver gave everyone the chance to easily create custom websites, without needing proficiency in CSS or HTML. More than 20 years later, Dreamweaver is still available and in use!

A screengrab from Dreamweaver 1997

Another popular early no-code website creator was Microsoft’s FrontPage, available from 1997 to 2003.

What are the advantages and disadvantages of no-code?