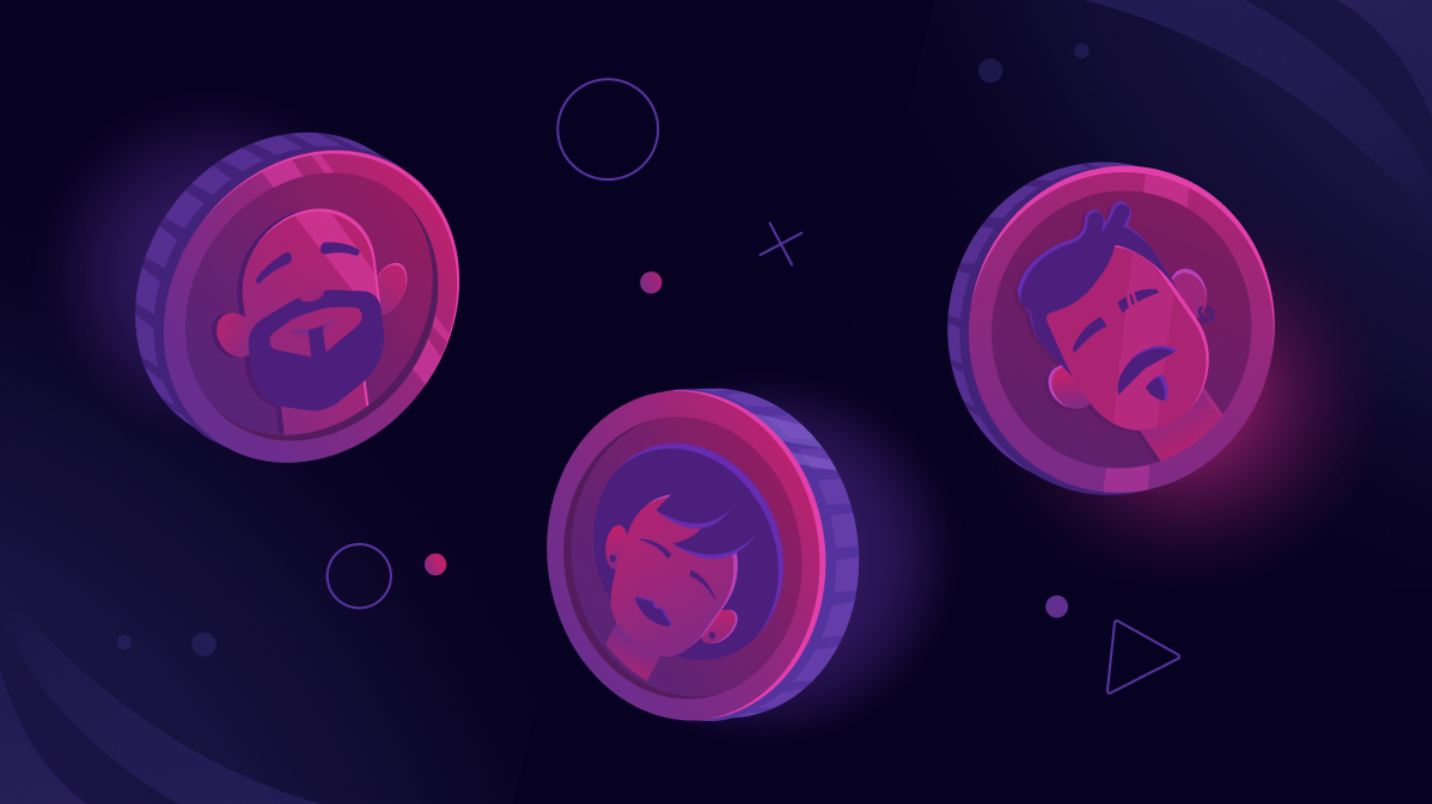 If you’ve been paying attention to the NFT space, you know that all types of celebrities have entered the crypto game recently. (If you’re new to NFTs, check out our resources here.) Major artists, athletes, musicians, and filmmakers have minted NFTs of their work. Creating NFTs allows them to leverage their celebrity without relying on intermediaries to distribute their work, so they can have more independence, ownership, and control over their output.

The decentralized and distributed nature of blockchain networks will likely revolutionize the way we create and consume content on the Internet. NFTs are only the beginning of this seachange. In fact, the term “Web3.0” has been coined to describe the next stage of the Internet's evolution. Social tokens are one of the most exciting innovations in that space.

What is a social token?

A social token is a blockchain token which is sold or issued by a content creator. The social token is a contract between the holder and issuer, entitling the holder to certain privileges or access. Social tokens usually offer exclusive content or experiences from a creator. Common privileges include early access to new content, membership in an exclusive group or chat, or meet-and-greets with the creator themself.

Some social tokens even offer royalties or percentages of the revenue from the creator’s work. The tokens are tradable in secondary markets where the price fluctuates with demand for the issuer’s content. Someone might purchase a social token as a way to purchase “stock” in the career of a celebrity they think is on the rise.

There are two main types of social token:

Social tokens are a type of blockchain token, a broad category which also includes cryptocurrencies, non-fungible tokens (NFTs), and governance tokens. (For more on tokens and their distribution, check out this article.) Like cryptocurrencies or NFTs, they are distributed on a decentralized blockchain network. Social tokens are fungible, meaning they are interchangeable for each other, unlike NFTs, which secure unique, one-of-one objects. Some NFT collections such as Bored Ape Yacht Club do offer social features, which can make this distinction blurry at times.

Let’s take a look at some of the most famous, innovative, and important social tokens in the crypto space. This is far from an exhaustive list, and new social tokens are being launched every day.

Rally is one of the largest platforms for launching social tokens. Like most social tokens, coins on Rally usually offer some type of exclusive access or premium content from the creator. Fans can also tip the creator with their personal coin, allowing them to directly support their favorite artists. Among the largest social tokens by market cap on Rally are those belonging to Japanese soccer player Keisuke Honda, marketing guru Joe Pulizzi and musician Portugal. The Man.

Another major social token platform is Fyooz. Fyooz allows content creators to easily create individual social tokens which give the owners access to exclusive NFTs. The emphasis on NFTs is a specific feature of Fyooz, although other platforms such as Rally have launched NFT functionality as well. The highest-profile token on Fyooz is rapper Lil Yachty’s $YACHTY, which sold out in just 21 minutes upon launch. In addition to exclusive NFTs, Yachty holders also receive custom gift boxes curated by his mother!

There are three types of VeeFriends tokens: Access, Gift, and Admission. The 300 Access tokens grant the user in-person or virtual hangouts with Vaynerchuck himself. A unique twist is that the different characters refer to different experiences: there’s a Keynote Koala (gives the user access to his keynote speeches), a Jam Session Snail, and even a Wine Shopping Spree Woodchuck. The Gift tokens entitle the holder to a gift curated by Vaynerchuck and the remaining Admission tokens are tickets to Vaynerchuck’s annual VeeCon conference.

NBA star Spencer Dinwiddie launched his SD8 token in 2020. Each token was listed for $150,000, representing a share of his $34 million contract with the Brooklyn Nets. Dinwiddie aimed to sell $13.5 million in tokens, with the revenue from the sale acting like a bond which provided him with upfront capital. The sale failed to reach that target, although it was an important first step in Dinwiddie’s experimentation with celebrity-backed crypto-contracts. Dinwiddie recently launched Calaxy, a platform which allows creators to easily tokenize their work.

One of the most fascinating experiments in social tokens came from Alex Masmej, creator of the $ALEX token, as well as the DeFi start-up Rocket. In 2020, Masmej was just 23 years old and living in Paris, eager to pursue his dream of working in the Silicon Valley crypto world. In order to finance his future, Masmej sold $ALEX tokens, which entitle the purchaser to a share of his income for the next three years, with a maximum payout of $100,000. Masmej took it one step further, giving each $ALEX token governance rights over his life. That’s right: one $ALEX token equals one vote over Masmej’s daily activity. In this way, $ALEX is both an individual and community social token.

One of the most exciting aspects of social tokens is their potential role in shaping Web3.0 But let’s not get ahead of ourselves. What exactly is Web3.0? In short, it’s the future of the Internet.

In order to understand Web3.0, we need to take a look at the history of the Internet. The “3.0” in Web3.0 refers to a third stage after Web1.0 and Web2.0. Those phases are largely defined by how we create and consume content on the web.

Web1.0 was the early Internet. It was static, simple, and very small compared to what we have now. Almost all web pages consisted of content that stayed the same day after day. Making a web page or uploading content required specialized skills. In short, Web1.0 was about consuming, not creating, for most users.

Web2.0 represented a seismic shift in that landscape. Social media became a global force. Every Internet user became a content creator, sharing their life through posts and pictures. The Internet became more collaborative and participatory. However, that participation occurred through centralizing corporate forces, such as Facebook, Twitter, and Google. Posts can be censored or deleted and algorithms determine what we see.

Web3.0 is the next phase, and companies like Pontem are building it right now. Web3.0 will be built on blockchain technology, which decentralizes and distributes control. Compared to Web2.0, Web3.0 will be defined by Internet conglomerates having less and less control over how content is shared on the Internet. Creators and consumers will be able to connect directly, without requiring corporate intermediaries. Sound familiar?

How will social tokens change the Internet?

Since Web3.0 is all about connecting creators and consumers directly, social tokens are an incredibly important piece of tech. Social tokens allow content creators to engage with their fans more intimately than ever before. They also give creators more control over the revenue from their work. In this way, social tokens go one step beyond NFTs, which are one-off ways of independently distributing work. Social tokens make decentralized distribution the main way a celebrity interacts with their fans. It’s a massive change to the way we think about media.

In fact, major media players may be entering the social token space soon. There has been talk of Disney launching a social token. Can you imagine how eagerly Star Wars or Marvel fans would snatch up a token to prove their fandom and get exclusive experiences? What about a community token that acts as a fanclub? The possibilities are truly endless.

Pontem Network is currently building an incentivized testnet and development tooling for Facebook’s Diem Blockchain. We’re backed by the Web3 Foundation, and truly believe that blockchain is the future of the Internet. Come join us on our mission to build an inclusive, global Web3.0. Follow us on Twitter, subscribe to our Medium blog, and join our Telegram channel to stay updated on everything Pontem.