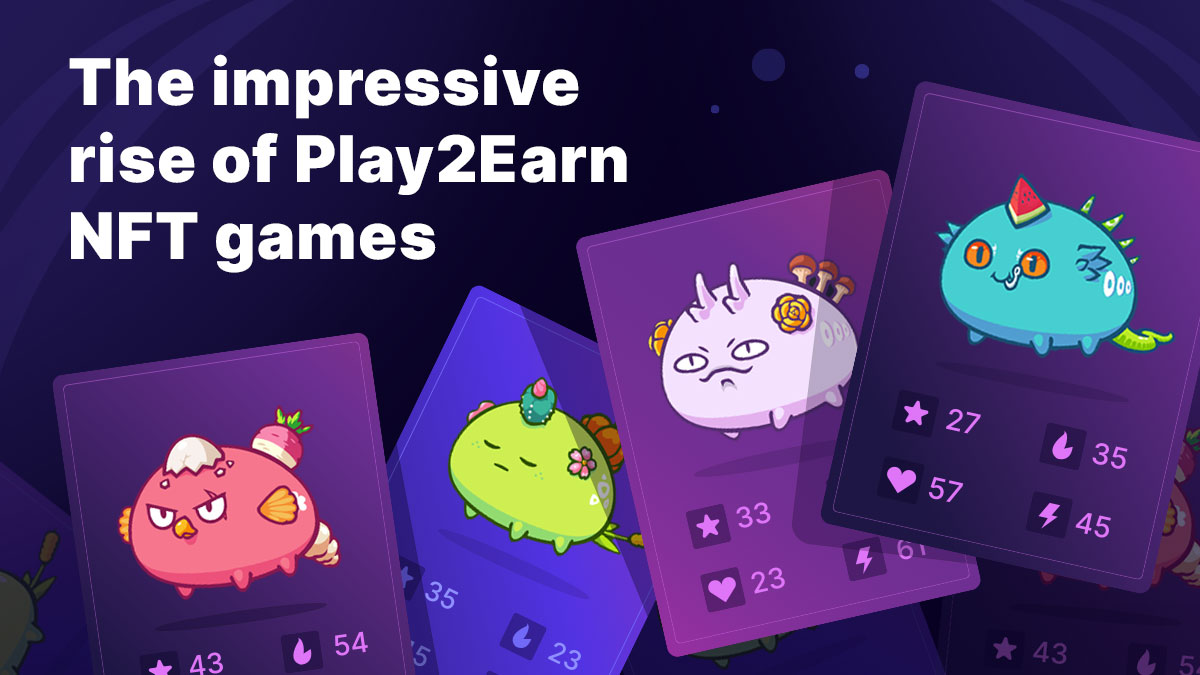 NFT-based gaming has come a long way in 2021. Instead of simply collecting blockchain pets, you can now fight battles, create new experiences, build structures on virtual land – and earn cryptocurrency in the process. Welcome to the world of Play2Earn gaming – one of the most exciting applications of NFT tokens so far.

What do these three tokens have in common? They all represent a new and very hot gaming trend called Play2Earn (Also known as “play to earn” ). Instead of just battling monsters or collecting artifacts for the fun of it, players acquire real tradeable blockchain assets.

The idea of buying and selling game assets for real money isn’t new, of course. Multiplayer games like Fortnite, DOTA2, or World of Tanks have massive economies, virtual currencies, and in-game artifacts (like weapon skins and characters) that sell for thousands of dollars. However, blockchain-based gaming introduces a new explosive element into the mix: NFTs, or non-fungible tokens.

In a generic Play2Earn game, users can hold, earn, and sell two types of assets:

1) Regular cryptocurrency, such as AXS, SLP, SAND, TLM, ALICE, etc. Users can earn these tokens for completing challenges, winning battles, selling in-game assets, or simply for playing - this is where the term ‘Play2Earn’ name comes from.

Tokens like SLP or SAND are called fungible because every unit is just like any other: though each SAND has its own blockchain ID of a sort, for practical purposes they are identical and have equal value, just like one $20 note is the same as any other.

2) NFTs: these are unique blockchain assets, each of which is associated with a specific in-game item, like a character or a piece of virtual real estate. ‘Non-fungible’ means that every token is one-of-a-kind and has its own market value – a bit like an artwork or a piece of real estate. A good definition is ‘scarce digital goods’.

NFTs have been all the rage in 2021, with people paying millions of dollars for CryptoPunks, BoredApes, and EtherRocks. Game NFTs, such as cute Axie monsters in Axie Infinity or Lego-style buildings in The Sandbox, are less valuable, but they can still be worth thousands. Importantly, if you own an NFT, you also own the underlying character or game object.

The difference between these assets and traditional in-game items like World of Warcraft gold or DOTA 2 weapon skins is that blockchain assets have an existence outside of the game. They ‘live’ on the chain, and you could even imagine a situation where assets from one game can be carried over to another (though we’re not quite there yet).

It all started with CryptoKitties

The first big NFT-based game was arguably CryptoKitties, where you collect virtual cats and breed them to make kittens with new properties, which can be worth more than the original ones. At the height of its popularity, the game caused the whole Ethereum network to lag and freeze because there were too many queued transactions to buy and sell cats.

CryptoKitties are still popular, though they have been superseded by other NFT collectible games, such as BlockchainCuties and Aavegotchi. However, the real breakthrough in NFT gaming came with the evolution of the gameplay - from simple collecting of one type of item to numerous NFT types involved in battles, quests, and world-building.

If you think that NFT-enabled gaming is just for geeks, think again. Axie Infinity topped 1 million active daily users in August – and $1 billion in revenue. This puts it on par with traditional games like Clash of Kings or Hearthstone.

The game is built around little Pokemon-like monsters called Axies, each of which ‘lives’ on the blockchain as an NFT. To start playing, you need at least 3 Axies, which you can buy in the game’s own marketplace or on OpenSea.

Prices vary depending on each character’s stats: health, speed, abilities, etc. As of the time of writing, the average price of an Axie was between $100-300, so one has to spend at least $300 to start playing. If you sell an Axie, there is also a 4.5% marketplace transaction fee.

This is how AxieYield Guild Games (YGG) Infinity and other Play2Earn games make money: by making players invest money before they can start earning rewards. This is different from most legacy games like Fortnite or Dota 2, where the basic gameplay is free but you are encouraged to purchase in-game items.

So why would players choose Play2Earn over traditional games? Mostly because in Axie, The Sandbox etc. you can cash out for real ETH, recoup the initial investment, and make a profit - or even a stable income. The real earning opportunity is one of the key drivers behind the popularity of crypto gaming.

If you don’t have the starting capital to buy Axies, you can apply for a so-called Scholarship. Successful game managers or Axie breeders with big collections of characters will lease some of them to promising beginner players who don’t have enough Axies of their own. The rewards are shared between the manager and the player (scholar). To win a scholarship, one usually has to write a convincing application, because competition is high.

An interesting twist on this concept is Yield Guild Games (YGG), a decentralized organization that buys Play2Earn assets (including Axies) and makes them available to the Guild members in exchange for a share of the earnings. YGG also selects and trains new players.

The reason why you don’t want to buy the cheapest characters is that you need them to win battles so that you can collect rewards. In Axie Infinity, you can compete both against the AI and against other players. Winners receive SLP tokens (Smooth Love Potion), which are needed to breed new Axies. See here for details on how SLP rewards are calculated for different victories and quests.

As you keep winning, your Axies become stronger and more valuable. Selling such leveled-up NFT characters in the marketplace is another way to make money with the game: the most expensive Axie so far sold for 300 ETH, equivalent to more than $750,000 today.

Another type of NFTs in Axie Infinity are LANDS, or land plots. So far they aren’t used in the gameplay much, but in the future players will be able to build structures on their land, house Axies, mine resources, lend plots, etc. An average plot costs $10-12k.

In October 2021, Axie developers made some important changes to the game economy. First, now only players with an MMR (Match Making Rating, earned in battles) of at least 800 can earn SLP for participating in the arena and adventure modes. This means that you have to battle hard (literally) before you can enjoy all the earning opportunities. The second change is that when you sell an Axie, its level is automatically reset to 1, so that users can’t expect to make much money by reselling valuable monsters, either.

Both of these changes affect primarily novice players. So  how much can you actually earn with Axie Infinity if you join now? According to some calculations, it’s around $15-30 a day when playing for a few hours daily. In the past, many users (especially in the Philippines) made most of their income with Axies, but the USD price of SLP has dropped a lot - plus, the organizers reduced the SLP reward rate. Overall, don’t expect to become rich with this or any other NFT game; but the more you play, the more you contribute to the accruing value of the game and of its tokens.

In The Sandbox, players buy virtual plots (LAND) and use them to build new experiences, games, structures, characters, etc. The game provides free software to create such items, and each of them is minted as an NFT. It’s part of the portfolio of Animoca Brands, a gaming and investment company that also owns brands like F1 Delta Time, Revv Racing, and Power Rangers: Legacy Wars.

Apart from LAND (around $1,000 per plot), the built-in marketplace features a bewildering variety of NFTs, from airplanes and motorbikes to dragons and DJ sets.

Users can earn SAND tokens for designing new assets, sharing and monetizing experiences, loaning out LAND, completing quests, winning tournaments, etc. Overall the gameplay is more varied than in Axie Infinity: The Sandbox is even called a metaverse, a sort of a full-scale virtual world.

Splinterlands is more of a traditional trading card game. Players collect NFT cards and battle each other. There are 4 card rarity levels, 7 types of stats, and 46 abilities. Rare cards have stronger stats and give a player an advantage, so they are worth more in the marketplace.

Every win yields rewards in DEC (Dark Energy Crystals) tokens. Additional ways to earn DEC are daily quests and reward chests, distributed every 15 days based on battle performance. It’s also possible to earn a profit from the NFT cards themselves by selling them or lending them to other players.

In September 2021, Splinterlands reached 260,000 daily users, becoming the most popular blockchain game at the time.

Sorare is a fantasy football game where you collect cards with real-life soccer stars, build teams, and compete in tournaments to win ETH and new player cards.

Sorare is valued at $4.3 billion after a recent fund-raising round and has agreements with major clubs like Barcelona, Juventus, Liverpool, etc. However, the game recently got into trouble with the UK Gambling Commission: the regulators are investigating Sorare to decide if it needs a gambling license. If they conclude that it does, it can be an alarm trigger for other digital collectible games.

After reaching all-time highs this summer, most Play2Earn tokens are down 40-100%. However, it doesn’t mean that NFT-enabled gaming has reached a dead end – rather, this could be a much-needed cool-off before the next leg up. The combination of NFTs, crypto rewards, and interesting gameplay has proven very successful so far, so NFT-enabled Play2Earn is definitely a space to watch – and perhaps something to try yourself.