What Do You Know About DAOs? 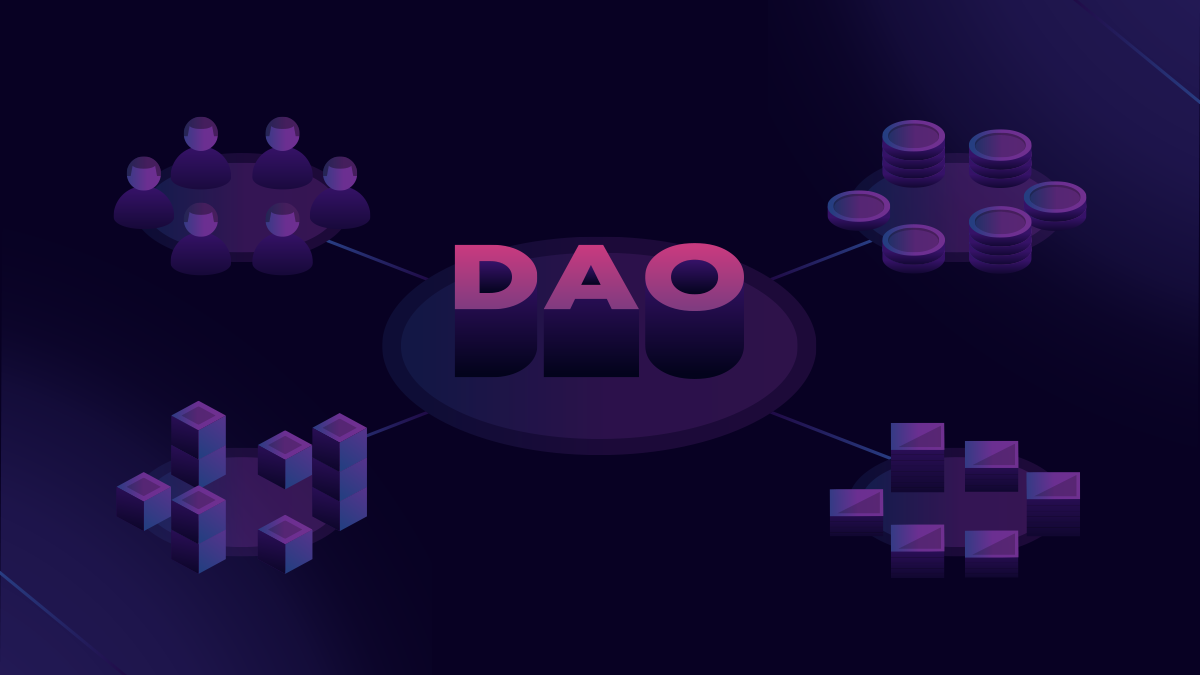 Think about your workplace for a second. Who do you report to? How do decisions get made? If you wanted to make a big change at your company, how would you make it happen?

Whether you are employed in crypto or anywhere else, your workplace likely has a chain of command. There is a ladder of hierarchy: you have a boss, who has a boss, who has a boss all the way up to the top. Even at the CEO level, the CEO might report to a Board of Directors or to investors. These structures centralize decision-making. Power is concentrated upwards and making changes requires approval from the people above you.

For most of human history, this is how people have organized themselves into groups to become more efficient and productive. Corporations and governments are highly structured and organized in order to optimize all of the complex tasks required in our modern society, with power concentrated at the top. But in the past decade, decentralized autonomous organizations (DAOs) have used the power of blockchain computing to automate and democratize decision-making. This is why DAOs are one of the most exciting areas of blockchain, with the potential to revolutionize how the world works.

What is a DAO?

A decentralized autonomous organization or DAO (pronounced “dow”) is a system that uses smart contracts to automate and crowdsource decision-making. Smart contracts are pieces of code that run on a blockchain which execute an action when certain conditions are met. Members of a DAO contribute cash to a treasury and receive governance tokens in proportion to the size of their contribution. These tokens are used to vote on proposals for the DAO. The results of those elections are coded as smart contracts, so the decision automatically takes effect and changes how the DAO operates.

DAOs are built on smart contracts, which makes them open-source and transparent. Ethereum is the most popular blockchain for DAOs today, but theoretically any chain can be used. That means someone anyone can investigate exactly how their voting decisions are put into effect. One person can not alter the code or tamper with the DAO’s operation without attracting a great deal of scrutiny from the other members.

The effect of all this is a fundamental change to how an organization operates. Decision-making is completely democratized, because proposals can be submitted by anyone and are voted on by everyone. Those changes are enacted automatically, without the risk of manipulation or human error, by coded smart contracts. There is far less risk of malicious action or corruption, because the code is completely transparent on the blockchain.

Cristoph Jentzch and his German start-up Slock.it is credited with creating the first DAO in April 2016. As the first one, it was known simply as “The DAO.” Slock.it had been experimenting with smart contracts to automatically purchase or rent something once a payment was received on the blockchain. Eventually, this idea evolved into creating an entity which received funds and had operations controlled by voting on proposals. Jentzch calls it “the creation of an organization similar to a company, with potentially thousands of Founders.”

Using open-source code shared on GitHub, thousands of early participants began building and contributing money to The DAO. An astonishing 12 million ETH, worth about $150 million, were amassed in the first month. The DAO functioned like a small, decentralized venture capital firm that collaborated on investments in other Ethereum-related projects. Contributing funds gave the investor governance tokens in The DAO, which conferred voting rights and entitled them to a proportional share of The DAO’s profits. The Securities and Exchange Commission classified The DAO’s tokens as securities (like stock in a public company) under US law.

The DAO failed due to a smart contract security bug which was first publicized by Christian Reitwiessner in June 2016, and later discovered in The DAO’s code. An update was attempted to correct this issue, but that required a two week voting period and a majority vote from The DAO’s users. On June 17th, an attacker exploited this weakness and stole 3.5 million ETH, worth about $50 million. The DAO ceased normal operations at this point and began a long, difficult process of recovering the funds.

Cristoph Jentzch has highlighted six key lessons for future DAOs based on this experience:

Although The DAO has not returned, numerous other decentralized autonomous organizations have arisen in recent years. Rember, a DAO is simply a type of operation that makes decisions by voting and implements those decisions with smart contracts. For that reason, DAOs can be used for all types of purposes, not just investment. More than $6 billion in digital assets are held by DAOs today.

MakerDAO was launched in 2015, when Rune Christensen began sharing his ideas for an Ethereum-backed stablecoin. MakerDAO is behind Dai, a dollar-pegged stablecoin with a $6.5 billion circulating supply. The primary function of MakerDAO is to issue Dai. Users generate DAI by staking ether in a Maker Vault as collateral.

Decisions regarding the currency are made by the DAO through the Maker Protocol, the set of smart contracts which control it. MKR is the governance token for the Maker Protocol, which grants the holder voting rights. MKR is an ERC-20 token on the Ethereum blockchain. Holding more MKR gives the user a larger say in elections they vote in. Governance Polls are used to survey the DAO and Executive Votes change the state of the system.

Compound was established in 2019 to create an autonomous, decentralized lending and borrowing platform for DeFi. In essence, the protocol maintains competitive interest rates for different cryptocurrencies in order to create liquidity. Compound is designed for Dapp developers building interest payment infrastructure for their platforms. (Make sure to read our article on yield farming to find out how to make money with this system.) For that reason, it has a strong emphasis on security and interoperability. Currently more than $18 billion in assets are earning interest on Compound across 16 markets.

Another major crypto project controlled by a DAO is “Uniswap, the largest crypto trading protocol built on Ethereum.” Uniswap is “a protocol for trading ERC-20 tokens,” the most popular token type used for many crypto applications. With so many tokens on the market today, it can be a challenge to seamlessly trade one for the other with consistent, accurate pricing. Uniswap simplifies trading by automating pricing and maintaining liquidity across various tokens. Users receive fees from Uniswap for staking their tokens to provide liquidity.

Uniswap is controlled by Uniswap Governance. Holders of the UNI token may introduce and vote on proposals in the Governance Forum. UNI was launched in September 2020 and initially distributed to past power users of Uniswap. Today, it is given out in proportion to the amount of liquidity users stake on the platform. To vote, DAO members bind their UNI to an address. UNI can be self-delegated if one wishes to vote on their own, or can be delegated to someone else to vote on their behalf. This enables a wide range of participation in the DAO, from the most dedicated members to more passive, low-effort participants.

Yearn is a suite of products that use DeFi to generate the maximum possible yield for its users. Across DeFi, various products offer competitive interest rates to users who loan their tokens for liquidity purposes (through services like Compound). Yearn aggregates those services to find the platforms and products which are offering the best rates. Yearn offers two products:

Yearn is governed by a DAO. Proposals are posted on the forum to be researched and debated. Voting takes place on Snapshot, a service used by many DAOs to simplify governance. YFI is Yearn’s governance token, and YFI can be locked in order to delegate voting power to others.

Curve is a decentralized exchange for stablecoins, which are low-volatility cryptocurrencies like USDC or Dai. Instead of matching specific buyers and sellers, Curve uses liquidity pools (amounts of tokens which it holds at any given time) to facilitate instant, low-fee transactions. Uniswap is one of the liquidity pools which Curve uses, illustrating the connectedness of the DeFi ecosystem and the ubiquity of DAOs in the space.

The CurveDAO, which governs Curve, operates in a way that should be familiar to you now. Holders of the CRV token make proposals in the governance forum and vote on them by locking their tokens.

DAOs of the Future

For now, most decentralized autonomous organizations are used to govern blockchain projects. However, the benefits of DAOs - democratization, decentralization, collaboration -- and the technology that powers them could be used for just about anything that requires people to make decisions together. Peter Graham of DAOhaus says, “The total addressable market of DAOs is the total addressable market of companies and non-profit organizations.”

DAOs today manage investments, control DApps, and invest in crypto projects and NFTs. But there are countless other uses. Friends With Benefits is a DAO that functions as a members-only social club. Some have theorized about how a DAO could be used to manage a rideshare company built on self-driving cars, where decisions could be automatically enacted by the software in the cars themselves. Using your imagination, it’s easy to see how vast corporations and even government functions could be managed by DAOs.

Governments are already taking note of DAOs and preparing for their mass adoption. In Australia, DAOs have been written into regulatory law, with a special emphasis on the transparency they provide. In the United States, Wyoming became the first state to legally recognize DAOs this summer. DAOs which incorporate in Wyoming as a limited liability company will enjoy the same legal protections and liability restrictions as any other LLC. The former mayor of Cheyenee even launched a Wyoming-based DAO in response to the law. It will be interesting to see if this new law causes a DAO “gold rush” in Wyoming and if similar laws are enacted elsewhere.

One of the most important things for DAO is how its members communicate. This determines how new ideas are shared, how they are debated, and can affect the outcomes of elections. Today, most DAOs operate in fairly rudimentary ways. Proposals are shared on a forum or other website, where they can be commented on and rated. Many DAOs also connect on Discord or Twitter or through other social networks. These communication means are not particularly advanced and actually look more like Web2.0 than the participatory Web3 being built today.

As DAOs grow, their communication platforms will need to become more robust and inclusive. We might expect social giants like Meta, with platforms like Whatsapp, Instagram, and Facebook, to integrate DAO governance into their products. Or, we might even see them roll out new products that specifically cater to DAOs. Like most things in blockchain, DAOs are still very much in their infancy, and developers are creating new uses every day.

To that end, Pontem Network has created the best experimentation platform for Diem, the permissioned blockchain backed by Meta. Our incentivized testnet, Move VM smart contract platform, and Pontem Blocks, our low-code development tool, make it possible to start building for Diem. We hope to support DAOs that are developing on the fast-growing Diem ecosystem. To stay updated on our work, be sure to follow Pontem on Twitter, subscribe on Medium, and connect with us on Telegram.