Why are these 6 smart contract platforms called ‘Ethereum killers’? 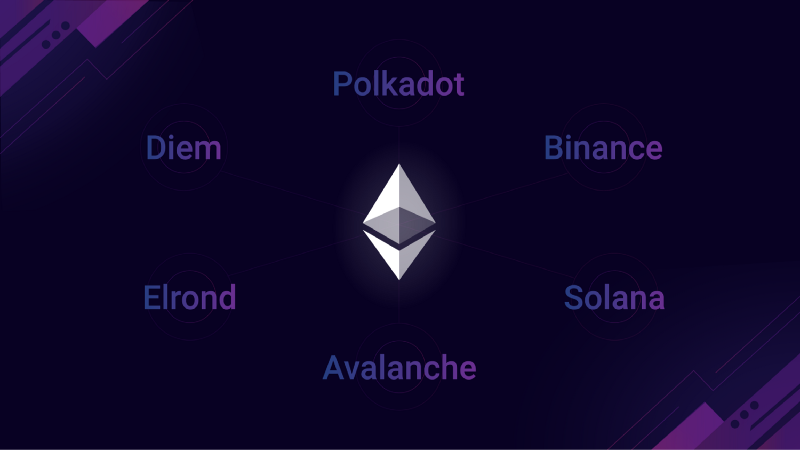 Polkadot, Binance Smart Chain, Solana, Elrond, and Avalanche– each of these networks has advantages over the slow and expensive Ethereum and has been called its future ‘killer’… Is there substance to the claims?

Can you really kill Ethereum?

It’s not a secret that Ethereum’s processing capacity is seriously stretched. The daily number of transactions has grown from 1M a year ago to 1.2M, reaching 1.7M at the peak in May 2021. but the network can still process the same 14–15 transactions per second. Similarly, the average transaction fee has ballooned from $0.7 to $6–9, peaking at $69 on May 12.

Of course, the Ethereum core developers know full well that the platform in its present form can’t sustain the ecosystem expansion for much longer. They are doing their best to speed up the transition to the sharded, Proof-of-Stake based Eth 2.0, but it’s going painfully slowly.

Speaking at the Startmeup HK 2021 event in Hong Kong, Vitalik Buterin said that the delays were mostly due to ‘people problems’, not to technical problems, but the result is the same: users and developers want higher speeds and lower fees, and Ethereum can’t provide them.

Unsurprisingly, dApp creators and the crypto media get excited about every new smart contract platform. Indeed, blockchains like BSC, Solana, Polkadot, Elrond, and others now have an amazing window of opportunity to acquire traction while Ethereum is lagging behind. It’s not the same as being ‘Ethereum killers’, though.

The founder of Cardano Charles Hoskinson put it best when he said, “Ethereum 2.0 will kill Ethereum 1.0. So I think that’s the Ethereum killer.” The rest of smart contract platforms also offer exciting opportunities to developers and should be judged on their own merits, not based on their chances to ‘kill’ another blockchain. So let’s do just that: examine six excellent alternatives to Ethereum and their pros and cons.

Solana achieves its amazing throughput (up to 59,000 tps on the testnet) thanks to a novel consensus algorithm called Proof-of-History. Instead of having to agree with each other, validators basically timestamp transactions. As a result, the block time is only 400ms.

Yet another advantage for dApp developers is that smart contracts can be written in Rust, C, or C++. By the way, there’s an active design proposal to embed Move language and Move VM into Solana — something we’ve already done on Polkadot with Pontem Network.

The most popular dApps running on Solana include Serum DEX, SerumSwap, and the brokerage protocol Oxygen.

If it wasn’t for Polkadot’s amazing interoperability features, we wouldn’t have been able to build Pontem Network. The ability to transfer value and data across blockchains is a groundbreaking innovation. Granted, Solana also has an inter-chain bridge called Wormhole, but there’s much more interoperability work being done by various teams on Polkadot.

Another great feature is that all the parachains (individual blockchains) run in parallel, without having to compete for resources. Every dApp can scale without slowing down others, unlike on Ethereum (we’re looking at you, CryptoKitties). With potentially hundreds chains, each with a 1000 tps throughput, and bridges to other blockchain, you could even say that Polkadot is infinitely scalable.

Avalanche was built with DeFi in mind and boasts the shortest time-to-finality of any smart contract platform — that is, the amount of time needed to guarantee that a committed transaction won’t be revoked or double-spent. In Avalanche, it’s less than 3 seconds and usually below 1 second.

It can also scale to millions of validators securing the network, ensuring unlimited scalability (as of the time of writing, there are around 970 validators).

Avalanche already has three blockchains: one for metadata validation (P-Chain), one for exchanging assets (X-Chain, where transactions are almost instant), and one for smart contracts and dApps (C-Chain). All dApps built with Avalanche are Ethereum-compatible. Developers will also be able to create their own custom interoperable blockchains.

The key advantage of this protocol is that anything that can be built on Ethereum can also be built and run on Avalanche, only hundreds of times faster and cheaper.

Binance made a very smart move with BSC — a DeFi-oriented blockchain that is compatible with EVM (Ethereum Virtual Machine) but runs much faster. Starting from late 2020, DeFi capital started flowing from Ethereum to BSC as ETH gas fees grew. In April 2021, the daily number of transactions on BSC was five times higher than on Ethereum, mainly because traders switched from Uniswap to PancakeSwap.

The only real issue with BSC is centralization. There are just 21 validators, selected by the 11 (!) validators of Binance Chain. End users don’t seem to view this as a problem, but dApp devs should keep this in mind: when building on BSC, you’re building on a chain that’s tightly controlled by a centralized exchange.

Elrond’s ecosystem is rather small for now, but with such an impressive roster of advantages, it will surely find its niche.

There are quite a few more ‘Ethereum killers’ we could include: Cardano, EOS, TRON, and so forth. The point, however, wasn’t to examine them all, but rather to show that Ethereum isn’t the only option for dApp developers — and not even the best one.

This is some text inside of a div block.
February 1, 2023
8
min read
How to Do Your Own Research (DYOR)
0
why-are-these-6-smart-contract-platforms-called-ethereum-killers
61015b3bad7fd97df1abbd82
amb-why-are-these-6-smart-contract-platforms-called-ethereum-killers
Login
Thank you! Your submission has been received!
Oops! Something went wrong while submitting the form.
×