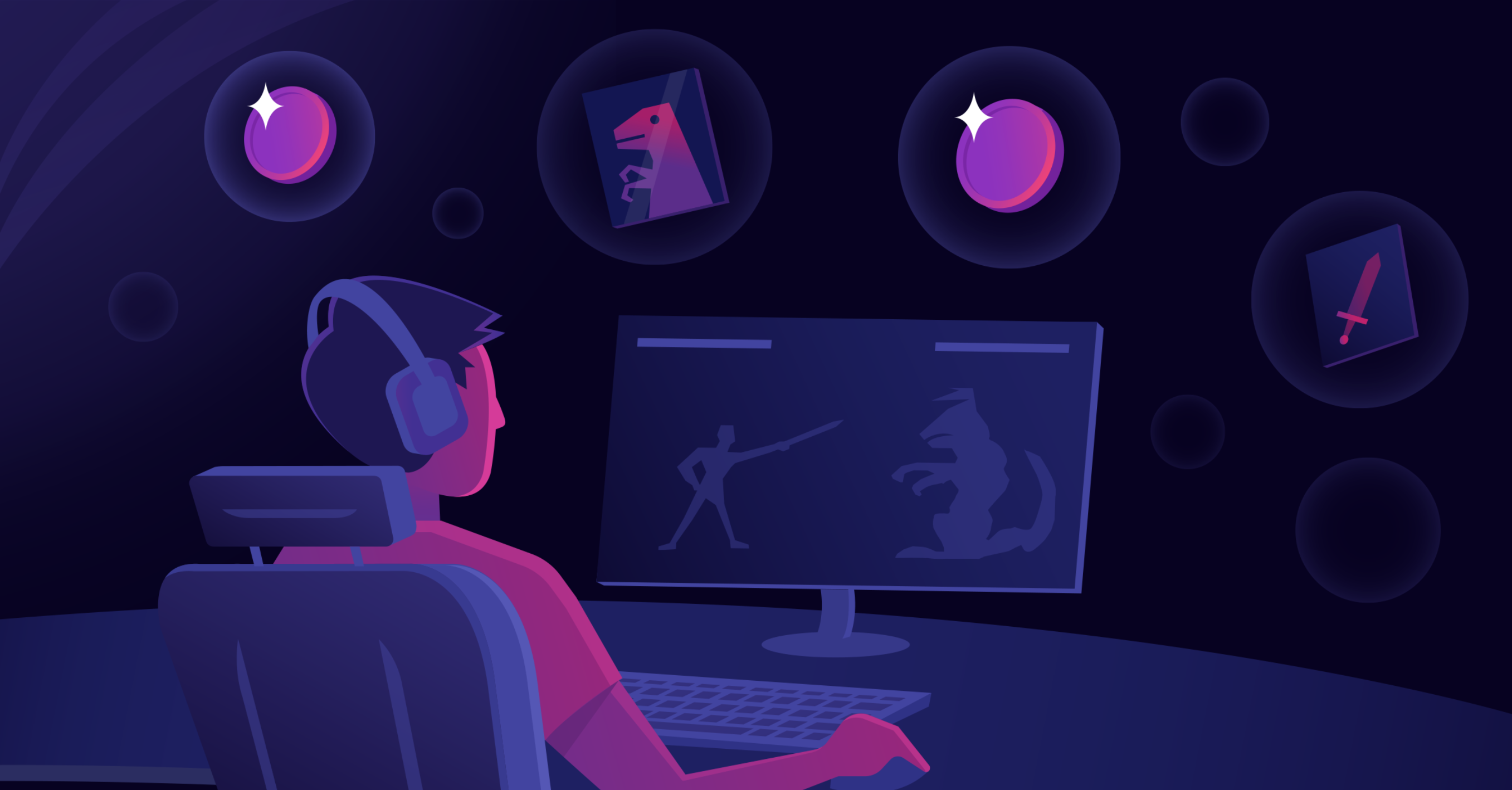 Play-to-earn gaming almost sounds too good to be true: collect awesome NFTs, use them to play fun video games, and get rewarded in more NFTs and cryptocurrency. And yet, that’s exactly how they work. Pretty awesome, right? (Make sure to check out our articles on the basics of play-to-earn gaming and its potential uses on Facebook.)

It should come as no surprise that play-to-earn gaming has absolutely taken off. The genre originated with CryptoKitties, launched by Dapper Labs in 2017. The game involved collecting and breeding NFT cats and using them to solve puzzles and play minigames. But by far the most popular play-to-earn game is Axie Infinity, in which players trade, fight, and complete challenges with their NFT Axie characters. The statistics surrounding Axie Infinity are mind-boggling: $2.1B in volume. 640,000 traders. Sales of an individual Axie exceeding $800K.

Now, a whole wave of new play-to-earn projects are attempting to recreate the success of Axie Infinity. Let’s take a look at just a few of the play-to-earn gaming projects you need to know.

REVV Racing is an arcade-style racing game built on blockchain technology. The game features first- and third-person racing graphics with the feel and quality of traditional gaming, but it’s built on Polygon. That means the cars are minted as NFTs and completely belong to you. Each race is recorded immutably on the blockchain. The REVV token is the utility token for REVV Racing and all of Animoca’s racing games. It’s the primary in-game currency used for rewards and trading the NFT cars.

MotoGP and F1 Delta Time are both licensed racing games by Animoca. Both games use the underlying gameplay of REVV Racing: rewards and trading with the REVV token, NFT cars, immersive gameplay powered by the blockchain. However, these games are licensed with the IP of MotoGP and Formula 1, respectively. Animoca has been a leader in licensing for blockchain games. It’s likely that these popular brands will attract their existing fan bases and massively expand the market for blockchain games.

The Sandbox is Animoca’s flagship metaverse. It’s a “virtual world where players can play, build, own, and monetize their virtual experiences.” Almost every element of the game is minted as NFTs, with users collecting LAND and populating it with ASSETS. SAND is the utility token that facilitates trading LAND and ASSETS within The Sandbox. The cumulative effect is a Minecraft or Roblox-like experience where players build the world and sell their creations. In line with Animoca’s efforts in licensing and partnerships, major celebrities like Snoop Dogg and mainstream game brands like Atari have collaborated with The Sandbox.

Yield Guild Games (YGG) is one of the most interesting forces in the blockchain gaming space. The group operates as a decentralized autonomous organization (DAO) to invest in NFTs in the blockchain gaming space. Decision-making occurs through the YGG token, which is used as a governance token to determine investments and other developments. YGG has a great track record with investments in many of the most popular blockchain games, including Axie Infinity, The Sandbox, and F1 Delta Time.

Splinterlands is a collectible card game, a la Magic: The Gathering or Pokémon. However, it’s completely digital and played with NFTs, making it perfect for YGG’s NFT-focused investment strategy. More than 283 cards have been minted, each with its own abilities and rarity. The NFT cards are available on the major NFT marketplaces. To date, nearly $900,000 has been paid out in tournament rewards.

League of Kingdoms is a medieval-themed massive multi-player online game (MMO). It is playable without NFTs, and is one of the richest, full-fledged games in the space. However, there is a rich NFT aspect which attracted YGG’s interest. The game world is divided into LAND that is minted and tradable as Ethereum NFTs. LAND holdings are monetized, with more successful LANDs getting higher payouts. Blockchain smart contracts are used for democratic community governance.

For these reasons, Polygon has been used by several popular games, including some we have covered here before. One of those is Decentraland, an immersive metaverse where users collect and trade real estate in virtual reality. MANA, one of the two Decentraland tokens along with LAND, has a market cap of $1.13B and routinely sees daily trading volume of $50M to $100M. Another popular Polygon game is Aavegotchi, which are cute NFT collectibles you can accessorize with wearables. Gameplay is similar to Tamagotchi toys, where taking care of your Aavegotchi earns XP and boosts its “kinship score.” The massive NFT marketplace OpenSea is also built on Polygon.

Now, Polygon is taking NFT gaming to the next level with the launch of Polygon Studios, an in-house arm for developing video games and the NFT ecosystem. It offers “360-degree building and launch support for Blockchain games and NFTs” as well as“play-to-earn opportunities for gamers.”

Polygon Studios was founded to help brands launch their own NFT-powered games, and they seem to be succeeding. Polygon Studios has already partnered with major crypto gaming companies such as Animoca and Sandbox, as well as legacy gaming giant Atari. Polygon Studios is well-capitalized and making major moves, starting with a significant investment in metaverse casino Decentral Games (more on that below). They have also been working with MixMarvel to create blockchain gaming content. Also, the NFT division of Polygon Studios has partnered with Origin to produce celebrity social tokens.

Polygon Studios is a strong sign for the entire play-to-earn and blockchain gaming space. It signals the beginning of a large wave of investment that can be used to build more exciting and rewarding blockchain games. It is also an intriguing business move for a protocol to launch their own content arm. As the audience for blockchain gaming and NFTs grows, we may see a lot more of that in the future.

Another major trend to watch in play-to-earn and NFT gaming is crypto-powered casino games. Gambling is a natural fit for play-to-earn technology, as players already expect to be paid out if they win. Blockchain technology can enhance the experience by making the games fairer and more transparent. Let’s take a look at a few play-to-earn casino games that have garnered a lot of attention and investment recently:

Polker bills itself as “the first blockchain based poker game.” Polker is free-to-play and highly immersive with high-end graphics and VR capability. Players are rewarded with NFTs, which are themed based on the elements: earth, fire, water, and air. Polker is built on the Unreal gaming engine, one of the most popular tools for building blockchain games.

Polker has partnered with Polygon and Polkadot to utilize the full potential of blockchain technology to greatly enhance the digital poker experience. Polker encodes every element of gameplay in verifiable smart contracts. This means the game is verifiably fair, a huge improvement over other casino games where the mechanisms are opaque. It also allows for faster gameplay. Additionally, uses the players’ seeds and blockchain hashes to create a True Random Number Generator (TRNG) which makes the cards truly random and impossible to predict. Polker has received a few key investments, including from Master Ventures, which have allowed Polker to build a massive $100,000+ staking pool. Polker plans to launch on iOS, Android, and Windows in Q2 2022.

Decentral Games is a blockchain casino game built on Polygon that describes itself as “play-to-earn gaming in the metaverse.” Like Polker, Decentral is free to play yet rewards the player handsomely. Intriguingly, Decentral pays the player whether they win or lose: you can receive up to 50% of your expected losses back in their proprietary $DG token. Decentral offers poker, blackjack, roulette, and slots. It’s a whole casino in the metaverse! Players can also cash out in ICE, Decentral’s in-game play-to-earn token, or NFT accessories. Decental Games is controlled by $DG DAO. That means players can stake their $DG tokens to vote on new games and payouts, as well as earning yield. (Check out our in-depth guide to staking and yield farming for more info.) The ability for gamers to take more control over how they play and democratize decision-making through DAOs is one of the most exciting aspects of play-to-earn gaming. Decentral has partnered with Decentraland, Binance, and Bored Ape Yacht Club among other crypto power players to launch in October 2021.

SportX is a sports gambling platform powered by Ethereum, where users can bet on many sports in ETH, DAI, or USDC. Their proprietary SX token can be used for staking rewards, governance, and to reduce betting fees. The platform claims to offer more security and reliability than traditional sports betting sites because “players bet directly from their cryptocurrency wallet, while wagers are held in escrow by smart contracts until a winner is determined.” Payouts are instantly deposited in the player’s wallet. Decentralized Ethereum nodes also replace manipulable in-house servers.

While SportX is not available in the United States due to national laws, it is popular around the world. SportX has an all-time volume of nearly $60 million and that figure is growing rapidly. Other blockchain sports betting sites are popping up as well, such as BlokSports, which is backed by NFL star Marshawn Lynch.

Play-to-earn games are revolutionizing the gaming space with the security, reliability, and democratic nature of blockchain. Players can earn real money playing video games, with payouts in NFTs and crypto and by staking governance tokens. Through DAOs, they can have a say in the development of the games they play. And with major money pouring into the space through the likes of Polygon Studios, there are sure to be new games every day. We’ve only scratched the surface with this article, so be sure to pay attention to our future reports on the state of blockchain gaming.