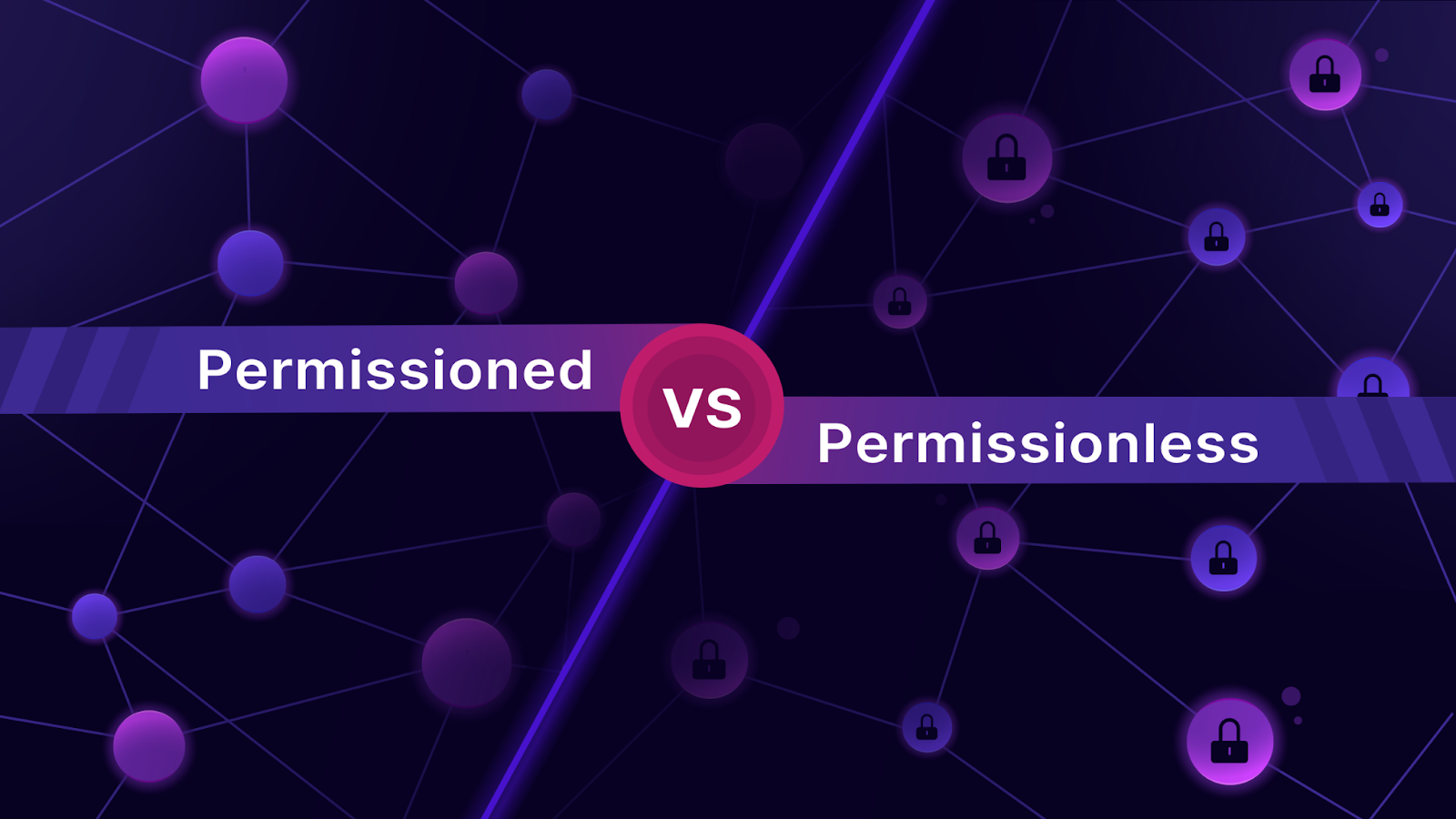 Blockchain has been around for years, the very first one - bitcoin - mined it’s first block in 2009. But in the over 10 years since then we’ve seen explosive growth in the industry as well as the number of blockchains. The first blockchain, and many that followed, is a permissionless blockchain - or a public blockchain. You don’t need any entitiy’s permission to use it, it’s open to the public.

As blockchain’s use cases and popularity soar, more tools have emerged to develop your own blockchain as well as applications. With popularity has also come regulatory scrutiny. Because of this, there’s been a recent emergence of permissioned blockchains, also known as private or enterprise blockchains.

What is a Permissionless Blockchain?

Each permissionless blockchain has its own native token or digital asset, upon which all other tokens are built. Many blockchains use this token as an incentive to participate in network validation, giving the token as a reward for participating in the consensus mechanism.

Decentralization is a key feature of permissionless blockchains as no one entity owns and operates the blockchain. The ledger is distributed across nodes that are located all across the world and not owned by one single source. Any changes made to the network need 51% of the nodes validating the blocks to agree to the changes.

That being said, there are exceptions like privacy coins such as Monero and Zcash, as well as Manta and Calamari from the Polkadot ecosystem. These coins were built on public blockchains, but in such a way that wallet address activity is hidden from the public so that transactions are more private.

Since anyone can build a digital asset or an application on a public blockchain, their codes are all open source, meaning that the code is public and anyone can view it and use it to build their own token or application. Open source code provides trust in the network, since anyone can see how it’s built and if there are any flaws or weak points, they can be seen and corrected.

Advantage and Disadvantages to Permissionless Blockchains

What is a Permissioned Blockchain?

There a few key characteristics of permissioned blockchains:

Because private blockchains are controlled by a more centralized authority, how transparent and anonymous they are is determined by the parties that participate in network validation. Each permissioned blockchain chooses how transparent they want to be. They also store a lot of data about the operations and transactions carried out by users, making them less anonymous than public blockchains.

Since the blockchain is private and not fully decentralized, decisions on where the network goes is decided by governance, usually made up of the members on the network.

Advantages and Disadvantages to Permissioned Blockchains

Originally introduced in June 2019 as Libra, Diem is a Facebook-backed project that is a whole ecosystem of digital products governed by the Diem association. The project rebranded in December 2020 in order to distance itself from Facebook, as well as meet regulatory requirements and expectations. The main mission of this project is to enable a simple global payment system and financial infrastructure to billions of people.

The project is overseen by the Diem Association, an independent membership organization that is responsible for the governance and development of the Diem network. The Association is meant to bring a degree of decentralization to the network by bringing together independent collaborators instead of relying on one centralized party.

The blockchain was developed from scratch and is meant to provide high scalability through high transaction throughput, low latency, and a high-capacity storage system; enhanced security; and future adaptability. The blockchain uses the Move language, a specially developed programming language meant to implement custom transaction logic and smart contracts on the blockchain.

Potential Benefits and Use Cases

Some of the potential benefits of the blockchain are to integrate blockchain technology into the everyday life of billions of people worldwide as the network will be accessible to all of Facebook’s billions of monthly active users. This will provide people worldwide - including the unbanked - with access to safe and affordable financial services. Another benefit is enhancing traditional financial systems to become programmable, interoperable, and upgradeable. A third benefit is the ability to build innovative yet safe and compliant financial applications that can serve anyone.

Byzantine Fault Tolerant (BFT) consensus is the consensus mechanism adopted to facilitate agreement among all validator nodes on the ledger of transactions, build trust in the network, enable high transaction throughput, and facilitate clearly described transaction finality. Since the security of BFT depends on the quality of the validators, due diligence on prospective validators wll be performed by the Diem Association.

Virtual Asset Service Providers (VASPs) are required to either be registered or licensed as a VASP in a Financial Action Task Force (FATF) member jurisdiction, or they must be a certified VASP under the standard set by the Diem Association. Check out our comprehensive article to learn more about VASPs and how Diem will handle them. check out our comprehensive article on the subject.

Pontem is helping even more by offering a way to easily build applications for deployment on both permissionless as well as permissioned ecosystems. With the added flexibility and options that Pontem provides, developers can use their creativity to make financial tools and instruments for users all around the world, bringing blockchain adoption into the present.