The 2nd batch of Kusama parachain auctions is on: who will win? 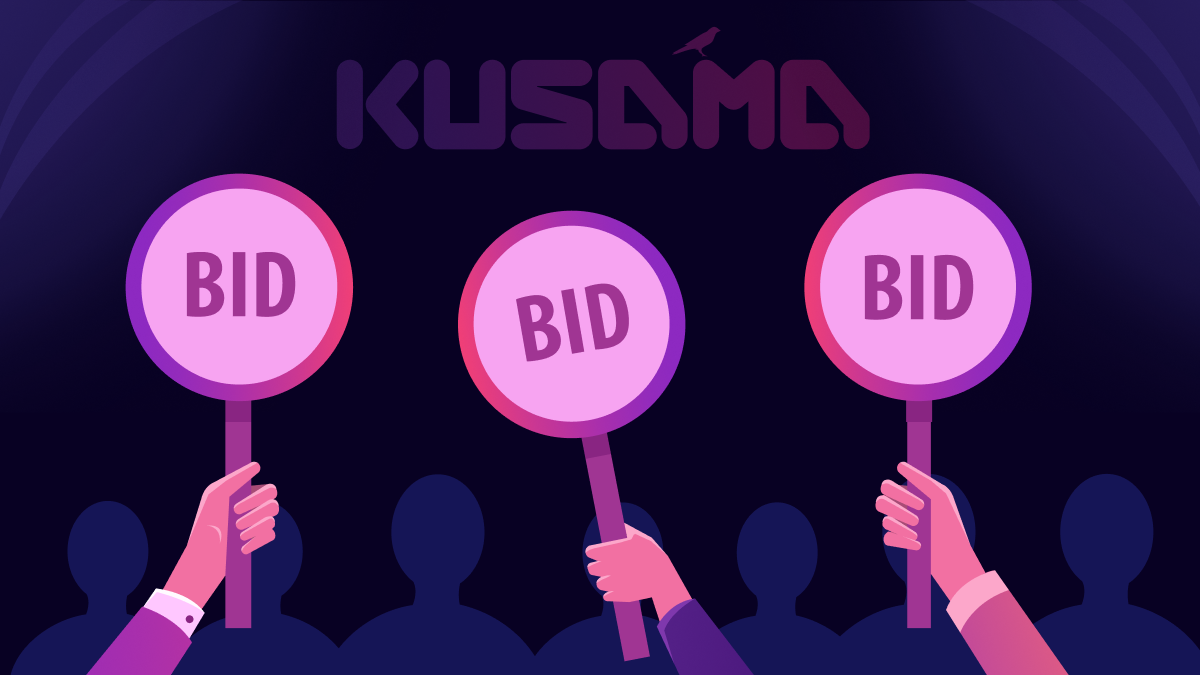 The second batch of parachain auctions on Kusama begins on September 8, and it’s time to look at the main contenders, ranging from a decentralized identity protocol to a platform that turns real estate into NFTs. KILT, Calamari, and Basilisk have taken an early lead in the crowdloan campaign, but who has the best chances to win a parachain slot?

About parachain auctions on Kusama

Auctions are used in Polkadot and Kusama to allocate parachain slots. For now, each of these networks can accommodate 100 individual blockchains, out of which 60 will be leased as parachains, and the remaining 40 will be used by different projects on the pay-per-use basis (so-called parathreads). However, the number of projects that would like to have a parachain is much higher – thus the need for auctions.

Before joining an auction, a project has to build and test its parachain. The next step is a crowdloan, or a campaign to attract community support and to accumulate a large enough amount of KSM (locked up for 48 weeks) to win.

Bidding in Kusama auctions is done through bonding (staking) KSM, the network’s native cryptocurrency. Both project teams themselves and their community can lock up KSM, resulting in really large stakes: for example, Karura won the first-ever auction with a bid of 500k KSM, or $90M.

Once a bid wins, the bonded KSM coins remain locked up for the whole duration of the lease (48 weeks). In exchange, a project will normally reward the crowdloan participants with its own tokens. For instance, Shiden and Moonriver (the winners of the 2nd and 3rd auctions) reserved 30% of all their tokens for this purpose.

Kusama is a so-called incentivized testnet for Polkadot blockchains and dApps. Before anything goes live on Polkadot, it is implemented on Kusama, giving developers a chance to  fix and re-engineer anything that breaks down.

This is similar to how our Pontem Network works, providing a testing ground for dApps compatible with the Facebook-backed Diem blockchain. Traction and liquidity will be available on Pontem (and across the wider Polkadot ecosystem) before Diem is launched, so that project teams will be able to not only try out their projects in a live environment but also start generating utility for their token.

In fact, founder Robert Habermeier calls Kusama a ‘chaotic proving ground’, and one of the network’s mottos is ‘Expect chaos’.

Luckily, there wasn’t much chaos with the first series of 5 parachain auctions, which took place between June 15 and July 20, with the bidding process going on for a week in each case. We’ve covered the winners in detail in one of our previous articles, and this time we’ll take a look at the key contenders for the next five slots.

When are the next 5 Kusama auctions?

The second batch of Kusama auctions was announced on August 19, following the end of the 5th and final auction from the first batch on July 20, 2021. The Kusama Council established the following schedule:

Just like in the first batch, the participants will have around a week to submit their bids. Once all five auctions are completed, there will be a pause of a few weeks in order to monitor the performance of the new parachains.

Possible winners for the auctions no. 6-10

The second round of crowdloan campaigns has begun, and you can track projects’ progress on parachains.info. Many of them also participated in the previous auctions and even came very close to winning – for example, Basilisk in auction no. 5, where it briefly led over Bifrost. Who will win this time?

One good indicator of a possible victory is the amount of KSM bonded by the community close to the auction end date. Days before the end of bidding for the slot no.6, KILT was already firmly in the lead with 220,000 KSM staked by over 12,000 contributors.  In fact, KILT reached its maximum cap and closed the crowdloan just five days after it started.

Predictably, KILT won on September 8. The next contender, Calamari, could boast just 120k KSM as of September 4 but eventually came in a very close second with 201k KSM.

KILT is a blockchain protocol that issues verifiable and revocable Web 3.0 credentials. A decentralized economy needs a system for generating trusted credentials that can be verified but not abused or stolen. KILT uses a network of attesters who verify the validity of each credential but don’t store any personal data. Moreover, users can revoke their credentials any time.

KILT will also offer decentralized KYC (in partnership with SocialKYC), allowing users to store and manage their personal data and decide  when and how to share it with apps.

During the first auction batch, the project that came in second invariably won the subsequent auction. Thus, Moonriver lost to Karura in the first auction but was victorious in the second; its runner-up, Shiden, won auction no.3, and so on. It’s likely that the same will happen this time: if Basilisk comes second after Kilt, it may very well win the seventh slot, etc. So all five of our picks could eventually be winners.

Calamari is an on-chain privacy protocol for DeFi dApps on Kusama. Its upcoming products, MariPay and MariSwap, allow users to transfer and swap assets like KSM, stablecoins, and parachain tokens – all the way keeping their blockchain addresses private. By the way, Calamari has a counterpart on Polkadot, called Manta Network.

Even though Calamari Network lagged behind KILT during the crowdloan phase, it has an ace up its sleeve: a partnership with Bifrost, the winner of the 5th auction. Through Bifrost’s SALP protocol those users who have bonded KSM to take part in Calamari’s crowdloan will receive derivative vsKSM tokens that can be staked on Bifrost to earn liquidity mining rewards. This means an additional source of passive income in addition to the KAM tokens that will be distributed to all the crowdloan participants.

Basilisk is a liquidity bootstrapping protocol – a solution that should provide any Kusama-based asset  with ready liquidity and to ensure efficient price discovery. It’s a sister project (rather than an experimental network) of HydraDX. With time, the solution should evolve into the grand HydraDX Omnipool, which will effortlessly provide liquidity on all blockchains. This way developers won’t feel pressured into launching on Ethereum just because it has better liquidity.

At present, project teams have to supply the bulk of initial liquidity to the trading pools on Uniswap and other decentralized exchanges; and whales (large investors) tend to buy up all available tokens for cheap in the beginning, then dump them once the price grows. The problem is even more pronounced outside of the Ethereum ecosystem, since liquidity is much lower on other blockchains.

By contrast, Basilisk bootstraps liquidity and at the same time creates sell pressure to reduce the price when demand is low. As a result, whales don’t have a reason to dump on regular users, and assets are priced fairly.

Basilisk came in second after Bifrost in the 5th auction, so it has a good chance to win one of the second batch slots, though its crowdloan size was just a bit over ⅓  of KILT’s as of September 8.

Altair connects Kusama to Centrifuge, a blockchain that allows users (mostly businesses) to tokenize real-world assets (RWA) and use them as collateral to obtain affordable financing. Supported RWAs include real estate, invoices, land, mortgages, future revenue, etc. Since every such asset is unique, RWAs are tokenized in the form of NFTs.

Thanks to Altair, this bridge between the real-world capital and DeFi will extend to Kusama. Even the most experimental and unusual assets can be turned into NFTs. All new features will also be launched on Altair before they are implemented in Centrifuge.

In the race for slot no.6, Altair had circa 48,500 KSM bonded in its crowdloan, which wasn’t nearly enough to win. But just like Basilisk, it has a strong chance to grab a parachain slot in the coming weeks.

Heiko is the Kusama counterpart to Parallel Finance – a protocol that allows users to lend, borrow, and stake assets on Polkadot. This might seem like a straightforward set of DeFi features, but Heiko does DeFi with a twist. For example, it offers leveraged staking (also known as liquid staking): one can first stake some tokens and then lend against them, earning staking rewards and lending interest at the same time. Another innovative feature is auction lending, whereas Heiko users will be able to lend KSM and DOT to the participants in the future parachain auctions, funding their crowdloans.

A number of projects have competed in every single auction starting from the beginning:  PolkaSmith (came in 6th in the first auction), Robonomics, Genshiro, Crust Shadow, and Darwinia Crab. So far they are lagging behind with their crowdloan campaigns, with the number of contributions ranging between 1650 (PolkaSmith) and 175 (Crust Shadow) as of September 8. However, they could pick up the pace in September and become the key contenders for the final slots in the second batch.

If you’ve made it to this part of the article, you might want to learn more about how Kusama auctions work. They use a basic format called a candle auction, which became popular in England in the late 17th century. An inch-long candle would be lit, and the bidding would continue until it went out. Whoever made the last bid while the candle was still burning was declared winner. One of the earliest references to this format goes as follows: ‘6 November 1660—To our office, where we met all for the sale of two ships by an inch of candle (the first time that ever I saw any of this kind)’ (Samuel Pepys, writer and politician).

The classic candle format has a drawback, though: someone might wait until the last moment and then submit a large bid just before the auction ends, effectively guaranteeing a win. To prevent such last-minute bidding (also called sniping), Kusama modified the candle format: an algorithm randomly picks an ending point after it has already happened.

Any bids made during the first two days of each week-long auction (the initial bidding period) are definitely considered. But those submitted on days 3 to 7 (the so-called ending period) have progressively lower chances of being valid  - i.e. they risk falling beyond the randomly chosen endpoint. Essentially participating projects know more or less when the auction should end, but not the precise endpoint, so they are encouraged to submit bids earlier. They can also see how much others are bidding and increase their bid if they can.

When placing a bid, a project should also specify for how long they would like to lease a parachain slot. This can range from 6 weeks and 48 weeks, divided into individual periods of 6 weeks each. For the projects that won the first 5 auctions, the lease will expire on May 13, 2020, while for those from Batch 2 the end date is August 5, 2022.

Even if you don’t plan to use any of the dApps we’ve described, you should still keep track of which projects win the upcoming auctions, since their native tokens can experience a fast price increase once they are listed on exchanges. For instance, Karura’s KAR pumped from $4.1 to $9.4 in just two weeks in August, and Moonriver’s MOVR went from $70 to $185 in just 4 days. Kusama is quickly becoming the hotbed of experimental blockchain activity – and Kusama-based crypto assets are turning into very attractive investment assets.

Stay tuned to find out more about Pontem Network and the decentralized world! And if you have any questions, join our official Telegram chat.