What is Decentralized Social Media? 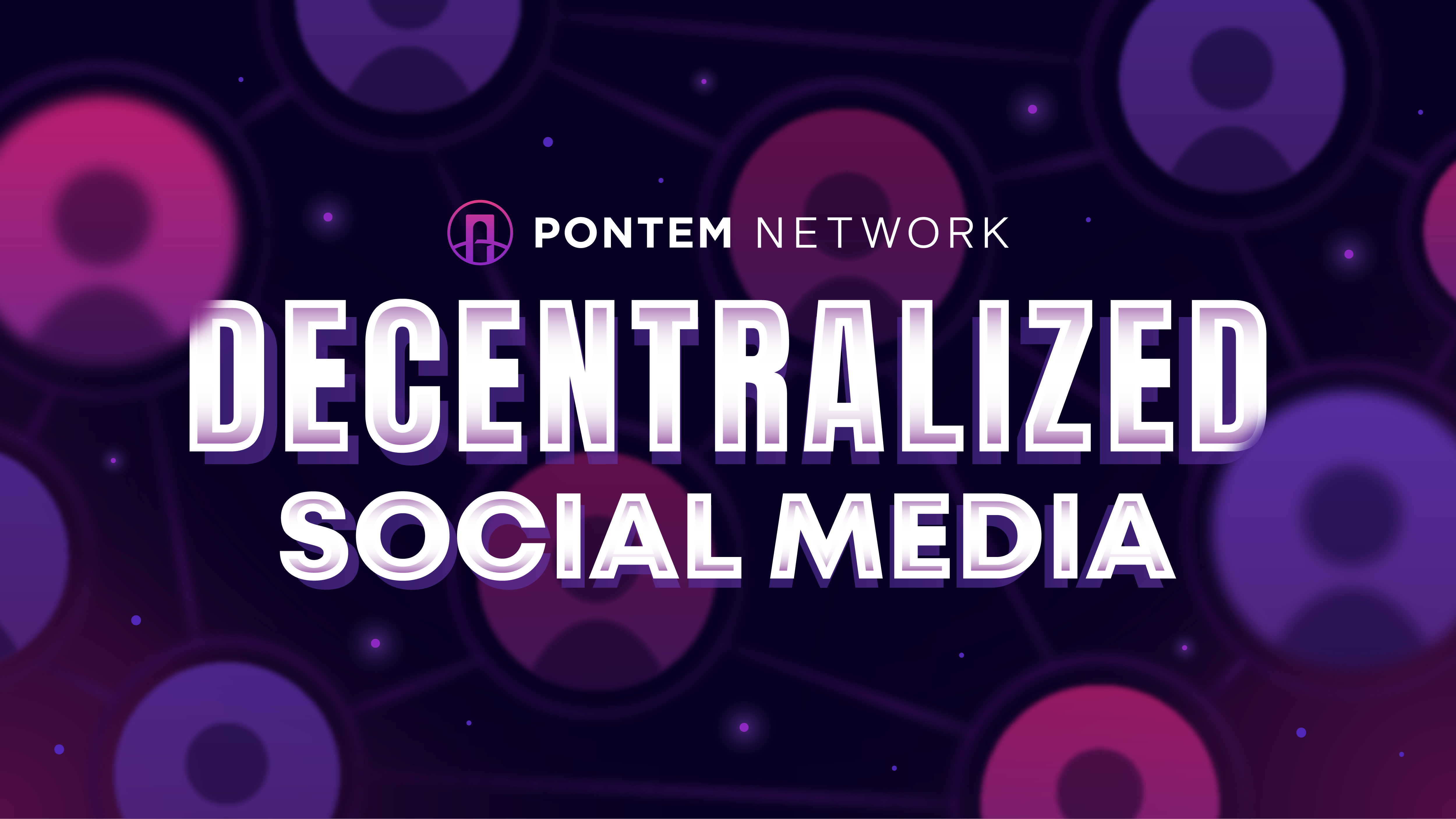 Unless you live under a rock, you’ve surely heard the criticisms of big social media platforms and tech giants. Facebook, Twitter, Google, and TikTok have all faced a cacophony of complaints over the past decade. You’ve probably heard it all:

Many American politicians say the government does not have enough oversight over these companies and platforms. Meanwhile, other politicians fear the Chinese government has too much influence on TikTok. Pretty much everyone agrees these companies have been intrusive on our privacy and reckless with the data they’ve collected. And that’s just the beginning!

But, could blockchains fix this? A new crop of social media platforms have arisen powered by blockchain technology, which claim to address at least some of these problems. You may hear this broad category referred to as “decentralized social” or “web3,” and these terms tend to have overlapping, malleable definitions. That said, let’s dive in:

What is decentralized social media?

In crypto, decentralized is pretty much the buzzword of all buzzwords. You might have heard of decentralized finance, or DeFi, which uses blockchain technology to create financial systems that are not controlled unilaterally by institutions. This is especially clear when you hear people describing traditional banking as CeFi, or centralized finance. Oftentimes, these DeFi protocols are controlled by communities (DAOs) that vote on changes.

In addition, the underlying code and smart contracts that power DeFi tools are typically completely visible to the public, so everyone can see how they work. Can you imagine a bank letting its customers vote on their interest rates and publishing how they make lending decisions? That’s the difference of DeFi.

Every aspect of Instagram is centralized. Posts are owned by the platform and held on Instagram servers; if Instagram deletes your post, you can’t get it back. The algorithm which shows posts to users is notably opaque, with little understanding of how it decides what gets prioritized. This has led to numerous claims of “shadowbanning,” when a user notices their engagement is being reduced with no clear explanation. (That’s not to mention an outright ban, which centralized social media can easily impose.) Instagram collects large amounts of data on its users, with little disclosure about what it collects and how it is used. And changes to Instagram are made by the company, with no input from the community.

Decentralized social media attempts to address these issues by distributing the social network using blockchain technology. Rather than content being owned by a platform and hosted on private servers, posts can be minted on the blockchain. Like an NFT, posts can be secured publicly and immutably, where no outside entity can destroy it without the creator or owner’s permission.

These platforms are often governed more like DeFi platforms, where the community can propose and vote on changes. Their algorithms are often simpler and the code behind them is often open-source. Some are governed by DAOs (decentralized autonomous organizations), a blockchain-powered democratic governance system. (See our in-depth article on DAOs for more.) By hosting social media on the blockchain, the ability for the platform to unilaterally delete, ban, or otherwise censor is limited. Once something is minted on the blockchain, it is virtually impossible to remove or undo.

In its early stages, the Web consisted of static sites where information could be accessed, often limited mostly to text by slow speeds. A lack of underlying infrastructure made it difficult to create a website without technical skills. (Think of services like Wordpress or Wix that let anyone create a site today.)

Over time, the Web evolved and became more participatory. Improvements to infrastructure, particularly home Internet speeds, enabled users to not just consume content, but create it online. From early forums, the major social platforms involved. This shift marks the change from the early days of the Web to Web2.0. Soon, people were not just sharing stuff they made, but their entire lives on social media.

This led to a simultaneous centralization of the web, as people and content migrated from millions of separate sites to just a handful, where vast quantities of content are created and consumed.

Now, another shift is occurring. Web3.0 is the technical upgrade to blockchain-based systems, alongside the social change of that content being owned by the users, NFTs being the most prominent example yet. (And we call it simply “web3” because it sounds cooler.) Decentralized social media is essential to fulfilling the promise of a web3 that reaches (and exceeds) the scale of Web2.0, while fulfilling its technological and social imperatives of blockchain-based ownership.

While this is an extremely new space, a few large players have already emerged. Let’s take a look.

CyberConnect is a “decentralized social graph protocol.” It is not a social media platform in itself, but a tool for developers to build social experiences into other projects. It currently boasts 1.5 million users in its Ethereum- and Solana-based ecosystem of dApps.

This data is obtained by onboarding users via their wallet. (You’ve probably heard of Metamask, Coinbase, and other large Ethereum-native wallet providers. Our very own Pontem Wallet is purpose-built for the Aptos blockchain.) Since most other web3 platforms are connected to a user’s wallet, the address is a rich source of data. And the best part is, that data remains owned by the user.

This gets at an incredibly important aspect of web3 social: composability. Instead of data being siloed in private company servers, it can be brought by the user from app to app, without sacrificing any ownership. An intriguing side effect is that new social platforms can grow much more quickly. In Web2.0, it takes years to acquire enough users to have enough data to build quality products, such as recommendation engines. (Notice how users are essentially just data in that scheme?) With web3 composability, that data already exists on-chain, so each new user arrives with their own rich data set already.

Port3 is one of our partners and their tools are natively integrated with our Pontem Wallet. Their aptly-named SoGraph social graph is a “web3 social insight portal,” that uses on- and off-chain data to support projects. They offer numerous powerful tools including:

Lens is another composable social graph. Like CyberConnect, Lens makes it easy to build social tools, while users own the data. Users can make profiles, follow each other, and create and collect content, all on Lens, so individual projects do not need to build these functions themselves. Lens is built on the Polygon blockchain. Interestingly, the main profile of each user is a 1-of-1 NFT. To follow a profile, a specific Follow NFT is minted. Currently, only addresses whitelisted by governance can mint their profiles.

Several user-facing social platforms have been built already on the Lens graph. The most prominent is Lenster. It functions very similar to Twitter, with short user posts in a feed. Users can “Mirror” each other’s posts (similar to a retweet), collect posts on-chain, and join communities.

LensFrens is another tool, this one built by the Lens team. It allows users to find and follow each other. Orb is a Lens-based social platform focused on web3 professional networking. At time of writing, Lens had 22,000 unique users in the past thirty days.

Developed by Dan Romero, Farcaster is another Web3 Twitter clone focused on decentralization. It emphasizes that it is “sufficiently decentralized” -- a technical standard meaning “two users who want to communicate are always able to, even if the network wants to prevent it.”

Users have complete control over their identity, content, and relationships (social graph). The code is also open-source, enabling numerous additional tools to be built on top of Farcaster. Identities are stored on-chain in an Ethereum smart contract. Data is cryptographically signed and stored off-chain on servers called Farcaster Hubs. Farcaster also natively supports NFTs, with collections and minting available in the interface.

Farcaster is currently available in a desktop application. Interestingly, users can get whitelisted to use it by DMing the founder on Twitter! It has been estimated to have about 3-4000 users.

Hooked Protocol is currently the largest social Dapp according to Dapp Radar, with more than 500,000 users. Hooked is a web3 base layer on BNB Chain that other projects can use to onramp non-native users. Hooked is built around an identification graph, an engagement graph which automates community interactions and creates incentives for users, and an attribution logic that tracks resource allocation and contributions.

The protocol has been live for less than a month, but has already seen massive access, in large part due to Wild Cash, which was built on Hooked. This play-to-earn quiz game shot to the top of the Google Play store in Indonesia, illustrating the power of crypto incentives as a web3 onboarding mechanism.

SteemIt is a blockchain-based social media dApp. It operates like a blogging platform where users can post to earn. There are three tokens on SteemIt:

Because users can earn tokens through posting, commenting, and upvoting, SteemIt has accrued a passionate and active user base. In 2018, more than 30,000 people used it daily. Today, that number has fallen to 2000-5000 daily users, but SteemIt’s initial success still illustrates the power of crypto to accelerate the adoption of a social network.

Mirror is a web3 publishing platform. Think of it like a blockchain-powered blogging service, somewhat similar to SteemIt. The entire process is decentralized, similar to the other projects covered here. Log in with an Ethereum wallet, publish your post with Arweave (a permanent web hosting solution), and your article and its publishing will have public addresses and transaction signatures. Other users can collect your writing on-chain as an NFT, which means some articles can acquire monetary value.

Interestingly, many of the web2 social giants have integrated blockchain-based assets like NFTs or other web3 features into their products. While this hardly makes them decentralized social media, they are intriguing developments to be sure.

Reddit recently adopted NFTs, and rapidly became one of the biggest players in the space in the process. Their collection of Reddit avatars is currently sold out and valued at more than $6 million. Even more importantly, more than 3 million unique users created wallets, known as  Vaults on Reddit, with more than 2.5 million using theirs to buy NFTs. For reference, OpenSea has only 2.3 million active wallets!

As of January 2022, Twitter allows users to use an NFT as their profile avatar, even giving them a special hexagonal frame to distinguish themselves.

Have you onboarded to web3 social yet? It’s a great way to connect with the broader community and stay up-to-date on the latest in this rapidly changing space. Connect with Pontem on Port3’s SoGraph, create your profile, and share the results with us on Twitter and Telegram.

Pontem is a blockchain product studio building for Aptos, the Move-based Layer 1. Our Pontem Wallet, Liquidswap DEX, and ByteBabel code translator are the premier products of their kind available for Aptos with 100,000+ users.