All about the first Polkadot auction: meet the winner Acala, Moonbeam, Astar, and other contenders 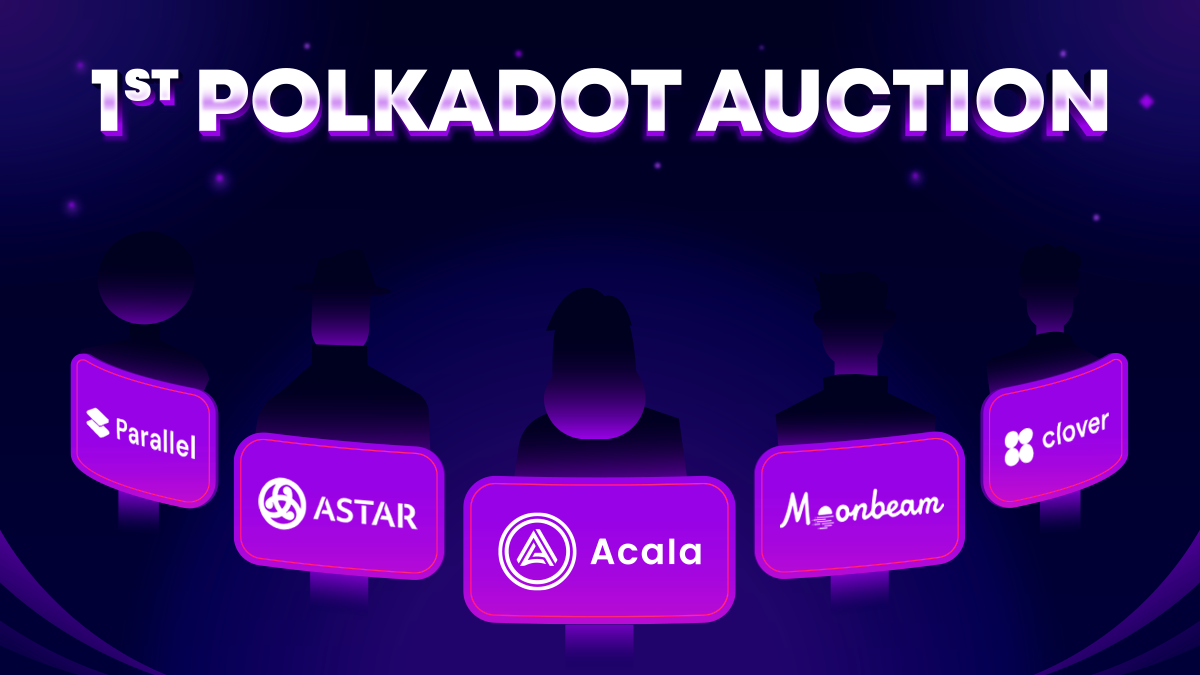 The total number of parachains is limited to 100, at least for the time being. However, every parachain can sustain many decentralized apps, forming its own ecosystem – so in the future we might see thousands of dApps running on Polkadot.

All the parachains run in parallel, without competing for resources, so the whole system will be very fast and efficient. The Relay Chain can process up to 1,000 transactions per second (tps), and each of the 100 parachains could reach the same number, resulting in an unprecedented throughput of 1 million transactions per second – at least according to the founder, Gavin Wood.

To distribute parachain slots, Polkadot uses an auction system. We have a detailed article on blockchain auctions, so here we’ll just repeat the key points:

You might be asking yourself: why would a project go to the trouble of running a crowdloan instead of just using DOT out of its own budget? The reason is simple: you need hundreds of millions of dollars’ worth of DOT to win. No single project can supply that amount without community help.

The auction model has already been tested on Polkadot’s ‘wild cousin’, Kusama. Before the first Polkadot auction began on November 11, there were 12 successful rounds on Kusama (read our in-depth reports here and here).

In general, new features are first tested on Kusama before being rolled out on Polkadot: for this reason, Kusama is called a ‘canary network’, or incentivized testnet.

The auction rules on Kusama are the same, but instead of DOT crowdloan supporters bond KSM. Interestingly, a few of the projects that won the 12 rounds on Kusama are themselves incentivized networks of various Polkadot startups. Here is a helpful table of correspondence:

It’s worth noting that our project Pontem Network is also an incentivized testnet – and a very unusual one at that. We are the first to provide a testing ground for developers building on Diem, the upcoming blockchain backed by Meta (formerly Facebook).

It’s not yet clear when it will become possible to deploy dApps to the Diem mainnet and what the KYC and AML rules will be. But with Pontem, teams can test out their Diem-compatible projects and gain traction across the whole Polkadot ecosystem much earlier.

Pontem has its own canary network, called Nox. You can already join the whitelist for the NOX token generation event ahead of our crowdloan to launch a parachain on Kusama.

Acala is an Ethereum-compatible DeFi hub for Polkadot – the future home for many DeFi dApps.

It features a decentralized exchange (AMM), staking, multi-currency gas fees, and its own stablecoin, aUSD. We understand this is a lot to take in, so let’s look at these elements one by one.

In Ethereum, all gas fees are paid in ETH, so you always need to have some in your wallet. And the fees keep rising: in 2021, the average transaction cost on Ethereum went from $4 to $35.

As a solution, Acala introduces micro (i.e. extra-low) gas fees that can be paid in any cryptocurrency: DOT, ACA, USDT, ETH, or even BTC. So for example, if you swap aUSDT for DOT on a DEX, you’ll be able to pay the fee in aUSD – a dream come true for the users of DEXes like Uniswap or SushiSwap.

aUSD, a DAI-like stablecoin for Polkadot

Major stablecoin issuers like Tether (USDT) and Circle (USDC) already announced that they will launch on Polkadot and Kusama. But Polkadot will also have a native stablecoin, aUSD.

aUSD will have a 1:1 USD peg and will be backed (collateralized) by a range of assets, including DOT, KSM, BTC, and ETH. The protocol will issue aUSD when users supply more collateral, just like it happens with MakerDAO’s DAI.

Polkadot encourages users to stake DOT to help secure the network (read our article on DOT staking here). However, once you stake DOT coins, you can’t use them for other things that could yield higher gains, such as lending. Acala has a solution to this dilemma: the Homa protocol.

Homa allows you to stake DOT through its non-custodial pool and get special L-DOT tokens in return (plus some more L-DOT as reward for staking). In turn, L-DOT can be used in many ways: to issue loans, mint aUSD stablecoins, trade, etc.

Liquid Crowdloan DOT is a special derivative product for the participants of Acala’s crowdloan (which is now closed). While their DOT are locked for almost 2 years (the parachain lease period), they are issued an equivalent amount of lcDOT. These derivative tokens can be used as collateral to get a loan in aUSD, swapped on the DeX, and so on. The lcDOT are issued in addition to the crowdloan rewards in ACA as an extra benefit.

Acala DeX is similar to Uniswap but built on Substrate – and thus faster, cheaper, and more scalable. The exchange will feature a number of markets or pools with two different assets in each, such as aUSD and DOT or USDT and KSM. Users who supply liquidity to these pools will earn a share of the trading fees generated by the DEX.

For a dApp developer, this is one of the most attractive things about Acala. The team built a new virtual machine, Acala EVM+, that makes it possible to deploy smart contracts written in Solidity and use Ethereum tools like MetaMask, Waffle, and Truffle. In other words, it will be easy to expand Ethereum DeFi dApps to Polkadot to capture additional liquidity – and as a regular MetaMask user, you’ll be able to switch between the networks in a couple of clicks.

How did Acala win against Moonbeam even though it raised less during the crowdloan?

The race to victory between Acala and Moonbeam was intense. 63% of the time, Acala was leading; but at the moment when contributions were closed, Moonbeam was at the head with $1.36 billion in bonded DOT. So how is Acala the winner?

As we mentioned earlier, the moment when the crowdloan officially ends isn’t the same as the end point of the auction. The latter is randomly chosen by an algorithm:  basically crowdloan supporters can still be submitting DOT, unaware that the show is already over. And that’s exactly what happened: at the actual end point Acala was first with $1.3 billion in DOT, supplied by 81,000 wallets. This is more than 5 times higher than the number of contributors in Karura’s crowdloan in June (14,164).

With $1.45 billion in DOT, Moonbeam was virtually guaranteed to win the second auction, which ended on November 25. Such massive community support isn’t surprising, because Moonbeam offers something that Polkadot definitely needs: an Ethereum-compatible smart contract platform.

Unlike Acala, which also features Ethereum compatibility but with a clear focus on DeFi, Moonbeam is more general-purpose. Developers can deploy smart contracts written in Solidity on Polkadot without any changes: they should work straight out of the box. Moonbeam even supports Vyper, a new programming language for EVM that is simpler and more secure than Solidity.

All dApps deployed on Moonbeam will automatically support DOT, KSM, aUSD, and other Polkadot assets, plus ERC-20 tokens and even BTC via a system of bridges.

The main use case for Moonbeam is to port existing Ethereum dApps to Polkadot to take advantage of low network fees and fast transaction processing times. A lot of Ethereum-based projects struggle to gain traction because few users are willing to pay upwards of $50 transaction. Some have tried to solve this by migrating to Binance Smart Chain, but Polkadot with its interoperable ‘internet of blockchains’ could be an even better option.

The idea is certainly proving attractive: even though the parachain isn’t live yet, dozens of popular projects have already announced integrations with Moonbeam. They include Dodo, Orion, Poolz, Injective Protocol, Frax, SushiSwap, etc.

By the way, Moonbeam’s ‘younger brother’, Moonriver, is the most active parachain on Kusama, with more than 8 million completed transactions to date, over 60 live integrations, and more than 173,000 wallet addresses.

Whereas Moonbeam supports only Ethereum smart contracts and dApps, Astar (previously Plasm) is more multichain: it will also support Cosmos, Secret Network, and other chains, yet to be announced.

One of Astar’s most interesting features is dApp staking, where developers earn ASTR tokens for creating smart contracts on Astar. 40% of all block rewards will be distributed to dApp creators: according to the team, this should be a strong incentive for developers to pick Astar over other smart contract platforms on Polkadot.

Astar’s canary network, Shiden, won the third auction on Kusama. Shiden is already live on Kusama, and developers can even join dApp staking to earn SDN. As for the Polkadot crowdloan race, Astar is currently far behind Moonbeam with $291M worth of DOT but still in a good position to win auction no.3 or 4.

Parallel Finance is a DeFi platform for Polkadot that aims to bring decentralized finance to 1 billion people. If you’ve been following our reports on Kusama parachain auctions, you’ll remember Parallel’s canary network, Heiko Finance, which won the 10th auction. Here are just some of the features offered by Parallel and Heiko:

Parallel Finance boasts partnerships with Astar, Manta Network and Litentry (all three Polkadot auction participants themselves), Bifrost Finance, Gauntlet, and many others. It’s also backed by some of the best-known funds in the industry, including Pantera Capital, Alameda Research, and Sequoia.

Clover is yet another cross-chain smart contract platform for DeFi – but with more integrated chains than Moonbeam or Astar. Apart from Polkadot, Ethereum, and Kusama, Clover will support BSC, Solana, Fantom, Avalanche, and even Edgeware.

Clover wallet is already available as a browser extension. Like in Acala, users will be able to pay gas fees in the assets they transact with instead of Ethereum – and like in Astar, the protocol’s revenue will be shared with dApp builders.

Clover’s canary network Sakura so far hasn’t secured a parachain slot on Kusama, so both projects’ crowdloans are now running in parallel. Apart from rewards in CLV, the participants enter a lucky NFT draw.

The first batch of Polkadot parachain auctions will run until mid-December 2021. Pontem Network will continue to bring you the latest updates, so make sure to follow us on Twitter and Telegram. And of course, join the whitelist for Pontem’s own Kusama parachain crowdloan to become an early NOX holder.