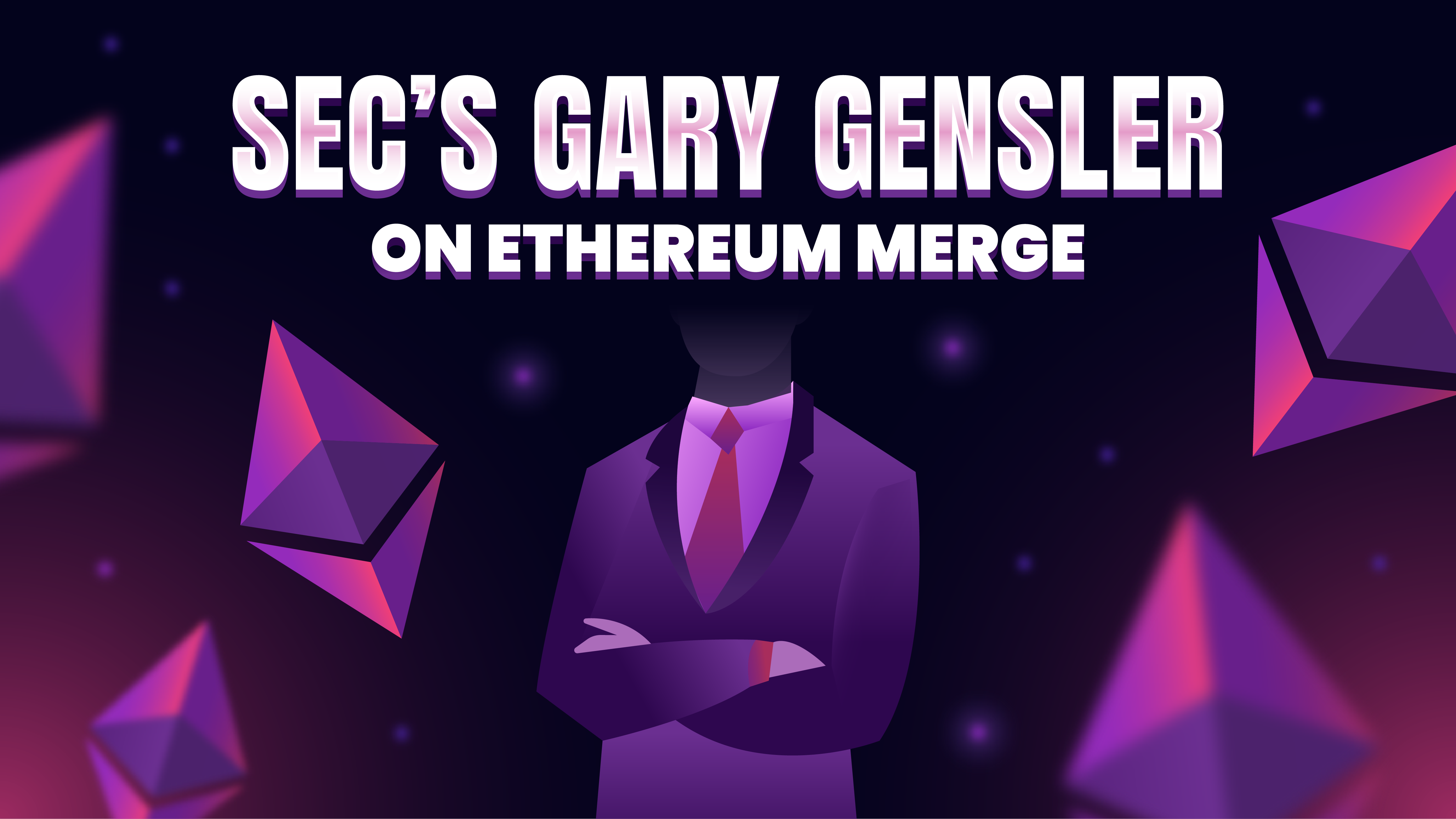 Ethereum and the SEC

Probably the biggest crypto story of the past month was The Merge, Ethereum’s pivot from Proof of Work (PoW) to a Proof of Stake (PoS) consensus mechanism that was years in the making. While most of the space celebrated, some were concerned by comments from Securities and Exchange Commission Chairman Gary Gensler. He said that “the investing public is anticipating profits based on the efforts of others,” which could mean the SEC views Ether as a security, opening the door for further regulation.

In this article, we’ll break down The Merge, the SEC, Gensler’s comment, and what this all means for you.

What is The Merge?

The Merge refers to a long-planned change to the Ethereum network, migrating it from Proof of Work to Proof of Stake.

Before The Merge, the existing Ethereum Mainnet, which has been running since 2014, used the Proof of Work consensus mechanism. In order for transactions to take place on a blockchain, the transactions (grouped in blocks) must be validated in order to be added to the ledger (or “chain”). With PoW, validators verify transactions by competing to solve incredibly complex math problems. The first validator to solve it verifies the transaction block, adds it to the chain, and receives a reward. This process is called “mining”.

The main criticism of PoW is that it uses a lot of energy. In order to power the computers which solve the equations, miners consume vast amounts of electricity.

So, the Ethereum Foundation which controls Ethereum, decided to pivot to Proof of Stake. In this consensus mechanism, validators vote on transactions to confirm them instead of mining. To keep them accountable, they must “stake” a large amount of collateral, which they can lose if they fail to act responsibly or uphold their duties. On Ethereum, validators must commit 32 ETH, worth about $45,000 at time of writing, to run a validator node. Ethereum estimates that this switch reduced energy consumption by 99.95%.

The Merge was completed September 15, 2022, combining the old Mainnet and the new Beacon Chain with both running PoS.

For more detail,  check out our deep dives into The Merge and consensus mechanisms.

What is the SEC?

The Securities and Exchange Commission (SEC) is an American regulatory body tasked with regulating financial markets and protecting investors. Their mission is to “protect investors; maintain fair, orderly, and efficient markets; and facilitate capital formation. The SEC strives to promote a market environment that is worthy of the public's trust.”

The SEC was created in 1934, following the stock market crash of 1929 that led to the Great Depression. In response to the financial misery of this period and the growing public outrage at the banking and finance industries, President Franklin D. Roosevelt pushed Congress to create the body, alongside several other new laws. Its first chair was Joseph Kennedy, a famed investor and father of future President John F. Kennedy. Today, the SEC has broad powers to monitor and enforce financial markets. It is often called the “cop on the beat” of United States finance.

Today, the SEC is headed by Gary Gensler, who was nominated by President Biden in 2021.

Regulation from government bodies has always been a thorny subject in crypto. Going back to the creation of cryptographic currency in Satoshi Nakamato’s whitepaper in 2008, the early days of crypto were decentralized, borderless, trustless -- and largely lawless. To many, the idea of governments meddling in crypto is anathema to their vision of this technology.

However, as crypto has grown into a trillion dollar industry, US regulators have seemingly had no choice but to pay attention. In 2021, crypto scams cost people $14 billion, arousing the FBI’s concerns. The US Treasury Department has expressed their belief that cryptocurrency is contributing significantly to tax evasion. The Justice Department has seized millions of dollars in crypto from terrorist groups. (Not to mention numerous other events in the US and around the world.)

The SEC in particular has intervened in crypto cases numerous times. You can see a running list of their enforcement actions here, including the much-publicized fine given to Kim Kardashian. They even have a Crypto Assets and Cyber Unit, recently expanded under Chairman Gansler, which handles crypto asset offerings, crypto asset exchanges, Crypto asset lending and staking products, DeFi platforms, NFTs, and stablecoins. While there are many examples of the SEC enforcing existing rules for crypto projects, there are two landmark cases which are used as the basis of their legal standing: The DAO Report and the Munchee Order.

In 2016, Cristoph Jentzch created “The DAO,” short for Decentralized Autonomous Organization. Using smart contracts, the DAO operated like a venture capital firm where participants voted on investments in other Ethereum-related projects. Users bought governance tokens in exchange for voting rights and a share of the profits. It amassed 12 million ETH, worth about $150 million, in the first month, making it one of the most significant projects in crypto history at that point. It failed shortly after due to a security bug and ensuing exploit, costing about $50 million.

In 2017, the SEC issued a report which found that The DAO’s governance tokens were securities, similar to a stock or bond, and were subject to US securities law. This confirmed that “issuers of distributed ledger or blockchain technology-based securities must register offers and sales of such securities.” It also meant that issuers who failed to register their offerings or follow the law were liable for violations. Thus, the SEC established that crypto projects were under the domain. Or in other words, that just because a project uses crypto technology, doesn’t mean it does not have to follow the law.

Also in 2017, the SEC intervened to stop Munchee, a crypto social network, from proceeding with a $15 million Initial Coin Offering (ICO). The cease-and-desist was justified on the argument that the coins were securities which had not been registered and lacked the required disclosures to the public. This confirmed the findings of The DAO Report that crypto products could be securities, and expanded them to include large categories of tokens, particularly those prominent in the 2017 ICO boom.

With these two actions, the SEC established broad powers for itself as a crypto regulator, based on the finding that many crypto assets were securities and subject to the same longstanding laws as other financial products. It is worth noting that these actions occurred under previous Chairman Jay Clayton, not Gary Gensler, suggesting that the SEC’s view on crypto is fairly consistent over time.

Who is Gary Gensler?

When Gensler was appointed in 2021, many in the crypto space were excited to see what his term as SEC Chairman would look like. Yes, he had a typical pedigree for the job: Chairman of the Commodity Futures Trading Commission, Assistant Secretary of the Treasury for Financial Markets, partner at Goldman Sachs, and more. But he had also been a professor at MIT, where he taught a course on cryptocurrencies and crypto technology. It’s even available on YouTube, where it has been a popular way to learn the basics and not-so-basics of crypto -- including for this writer! Clearly, one can not say that this SEC Chairman is ignorant about crypto, whether you agree with his opinions or not.

Gensler repeatedly stresses that he believes his job is to protect investors by enforcing the rules, not to penalize crypto or stifle innovation. “I think that we're actually aligned with the crypto investing public more than sometimes the news would report,” he said. He has also said “Crypto may offer new ways for entrepreneurs to raise capital and for investors to trade, but we still need investor and market protection.”

He believes that SEC protection is valuable for customers, citing issues with:

Gensler says that “Investor protection is just as relevant, regardless of underlying technologies,” clarifying that he agrees with the existing  SEC view that crypto is covered by securities law. He draws on a quote from US Supreme Court Justice Thurgood Marshall, saying “Congress painted with a broad brush to protect the public when somebody is raising money from the public and the public anticipates a profit.”

A major debate in the United States has revolved around whether certain crypto assets are securities or  commodities, a category of tradable materials that are the raw inputs of other goods, such as gold, grain, beef, or oil. In fact, Gensler considers Bitcoin to be a commodity, not a security, because it has “no group of individuals in the middle. So the investing public's not betting on somebody in the middle.”

Former Chairman Jay Clayton considered ether a commodity back in 2019, and the public has generally assumed Gensler shared this belief. However, Gensler has noted that “Ethereum is a bit more centralized and has more leadership,” with co-founder Vitalik Buterin in charge.

Therefore, investors were surprised when Gensler alluded to a possible change in his interpretation following the pivot to Proof of Stake. He told reporters that with this change, “the investing public is anticipating profits based on the efforts of others,” suggesting ETH may be a security, rather than a commodity. This would expose ether to SEC scrutiny and possible regulation.

Of course, numerous questions would follow: Over which transactions does a US regulator have claim? If Ethereum is not based in the United States, or even “based” anywhere, what powers does the SEC have? Would ether itself be a security, or would regulations take effect in a different way? At this point, we have many more questions than answers.

Another key issue is whether the SEC or the Commodity Futures Trading Commission (CFTC) would regulate certain crypto assets. The CFTC (which Gensler once chaired) has regulatory oversight over financial derivatives, including futures, options, and swaps. Since futures originated with agricultural products, the CFTC also has authority over commodities trading, which would include bitcoin and perhaps ether, depending on what happens.

To that end, a bill has been sponsored in the Senate Agriculture Committee by Sen. Debbie Stabenow (Democrat from Michigan) and Sen. John Boozman (Republican from Arkansas), which would give the CFTC more authority over crypto markets. The bill would:

Crypto firms would be held to the same rules for existing commodities brokers and exchanges, which are generally considered equally as stringent as those for securities. However, this bill is not yet law.

For now, crypto’s regulatory environment remains confusing and largely unresolved. Things are changing constantly, so keep up with it all by connecting with Pontem on Twitter and Telegram.

‍Pontem is a blockchain product studio building for Aptos, the Move-based Layer 1. Our Pontem Wallet, Liquidswap DEX, and ByteBabel code translator are the premier products of their kind available for Aptos with 100,000+ users.