VR and AR in Meta’s Metaverse 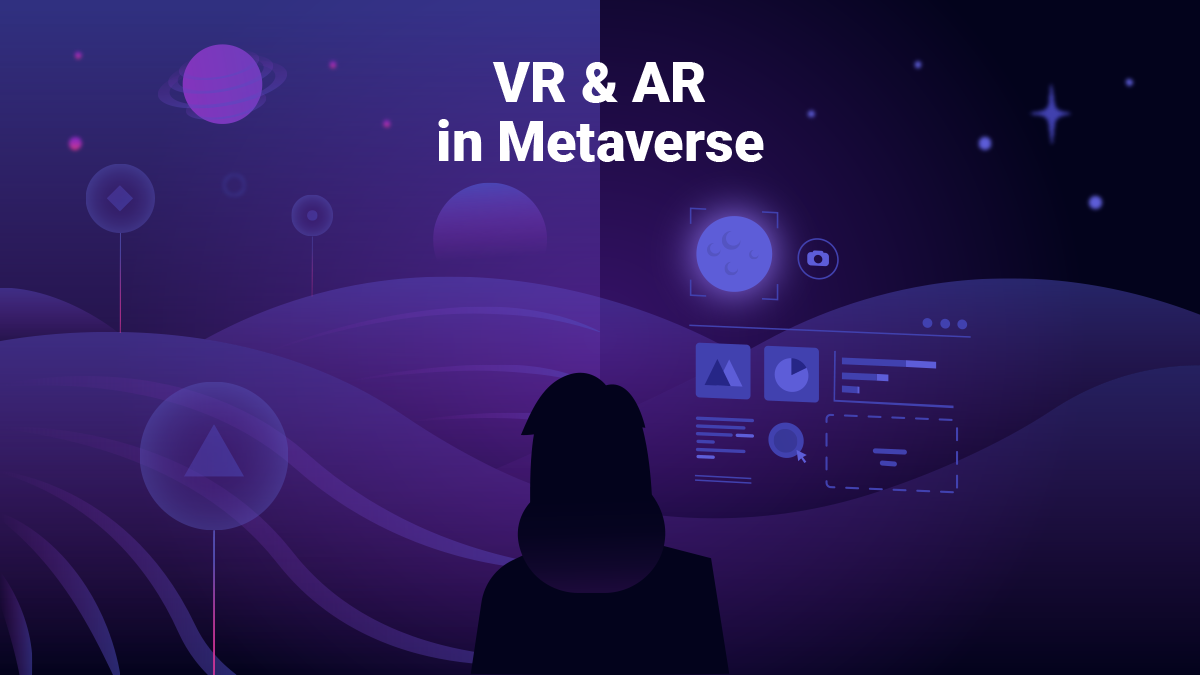 On October 28, Mark Zuckerberg announced that Facebook, which owns the Facebook platform as well as Instagram and Whatsapp, is now called Meta. The name change represents a larger shift in the $900 billion company’s ambitions. According to the announcement, ​​”​Meta's focus will be to bring the metaverse to life and help people connect, find communities and grow businesses.”

As we have covered in previous articles, this move has been in the works at Facebook for years. Facebook was early to the metaverse race, purchasing VR hardware company Oculus in 2014. Back in July 2021 , Zuckerberg explained his vision to turn Facebook from a social media company to a “metaverse company” and used the term more than 20 times on a quarterly earnings call. Facebook also launched a dedicated team for metaverse development at that time.

Wait, what is the metaverse?

Nowadays, the metaverse is the hottest buzzword in tech. Google Trend results show stratospheric growth in interest for the term, peaking first with the Roblox IPO in March 2021 and again now due to Facebook’s recent announcements. The word “metaverse,” was coined by the novelist Neal Stephenson in his 1992 book Snow Crash. His vision of a “collective virtual shared space,” where physical and digital reality converged still influences the metaverse being created today.

According to Bloomberg Intelligence, the metaverse will be an $800 billion market by 2024. And Facebook is far from the only company working on the metaverse. Microsoft is developing “mixed reality” technology for the US Army. Graphics giant Nvidia has Omniverse, its “platform for connecting 3D worlds into a shared virtual universe.” The youngest generations are already growing up in the metaverse in digital spaces like Roblox, Fortnite, and VRChat. All sorts of communities are connecting meaningfully with their friends on Discord. Play-to-earn games like Axie Infinity combine digital video games with real money using NFTs and crypto.

Now that we know Facebook/Meta is all in on the metaverse, let’s break down the role augmented reality (AR) and virtual reality (VR) technology play. But first: what are AR and VR, exactly?

What is augmented reality?

Augmented reality (AR) is technology which overlays digital graphics on the real world. This is often achieved through a smartphone or a wearable, which combines the user’s natural vision with computer-generated images. The most famous AR product is Pokémon GO, which uses your smartphone camera to locate Pokémon in real places. Other common uses of AR are graphics drawn over live sporting events, head up displays (HUD) projected onto windshields, or apps that allow you to see IKEA furniture in your house and Warby Parker glasses on your face. AR is combining the virtual and the physical into one immersive experience.

What is virtual reality?

Virtual reality can be difficult to define, especially as the technology has evolved so rapidly over the years. NASA uses this definition: “the use of computer technology to create the effect of an interactive three-dimensional world in which the objects have a sense of spatial presence.” Most people experience VR through a headset, which sits over the user’s head and places two screens in front of their eyes with embedded goggles. Facebook owns Oculus, the premier VR headset company. (More on that in a second.) In order to achieve the sense of complete immersion, VR platforms must have sufficiently high frame rates, quick response times, and large fields of view. Whereas AR overlays computer-generated graphics on the real world, VR uses graphics to create a new world that feels real.

In their push to build the metaverse, Meta is working on a number of AR and VR projects. In fact, they have been investing in the space for almost a decade. It all starts with Facebook’s acquisition of Oculus, the largest VR headset manufacturer, back in 2014. As part of the Meta rebrand, all Oculus products are being folded into the Meta name, illustrating the centrality of VR tech to the metaverse. On the AR front, Meta unveiled their Stories smart sunglasses with Ray-Ban. This is one of Meta’s first forays into wearable technology and signals their desire to corner the AR market.

It seems this is only the beginning. In the past two years, Facebook/Meta acquired a number of players in the VR space. The list includes many of the most compelling developers of VR video games and software: BigBox VR, maker of the battle royale game Population: One, Unit 2 Games, maker of the Crayta platform which is similar to Roblox, and Beat Games, maker of the hit game Beat Saber with more than 4 million copies sold. Meta’s other VR studio acquisitions include Sanzaru Games and Ready at Dawn. Commenters have said this amounts to a “near-monopoly in VR software” which shows Meta’s commitment to grow VR into a flagship gaming and entertainment platform.

Outside acquisitions are just one prong of the strategy. Meta is also throwing huge amounts of effort and cash to bulk up their internal metaverse development, including hiring 10,000 people to build the metaverse in Europe. Just before the Meta announcement, the company revealed another plan to spend $10 billion on Facebook Reality Labs, their team which creates AR and VR hardware, software, and content. Facebook Reality Labs works on cutting-edge VR and AR research, including “breakthrough AR glasses and VR headsets, including optics and displays, computer vision, audio, graphics, brain-computer interface, haptic interaction, full body tracking, perception science, and true telepresence.” It sounds like a Neil Stephenson novel, but futuristic technology like that is exactly what is needed to make the metaverse a reality.

Meta revealed a number of other plans to advance the metaverse at the Facebook Connect conference, such as improvements to their Horizon VR platform, with more social integration and a marketplace for virtual goods. (Read our analysis on how Facebook could supercharge the NFT market with gaming.) Facebook is also creating a $150 million fund for educational VR content, adding body tracking to their Spark AR and Polar development tools, and adding VR to 2D apps and video calling on Messenger. They also teased Cambria, a high-end VR headset that is still in development.

Novi, Diem, and the metaverse

The Meta announcement also came with changes to Novi and Diem, Meta’s flagship fintech and blockchain products. On Twitter, Facebook fintech head David Marcus announced that all of the company’s financial services, including the $100 billion in payments processed annually, by Facebook, would fall under Novi, which was previously only the name for their digital wallet project. He wrote that Meta’s mission in fintech remains to “empower everyone, everywhere to access the world’s financial system to accelerate financial inclusion and economic empowerment.”

This coincides with the rollout of Novi for use with certain stablecoins in pilot programs in the US and Guatemala. Diem is a cash-backed stablecoin created by Facebook and the Diem Association, which includes Lyft, Uber, Spotify, a16z, and more. It intends to be a secure, stable, and fast global cryptocurrency that advances similar goals to Novi: financial inclusion, especially connecting the 31% of the global population who are “unbanked.”

Together, these projects aim to provide a rugged financial infrastructure for the metaverse, where money moves through cyberspace as seamlessly as we will. Across all of these efforts, we see Meta’s goal of metaverse domination, from hardware to gaming and entertainment to social to financial services. As VR and AR continue to evolve at a breakneck speed, it likely will not be long until we truly exist in the metaverse.

What is Pontem Network?

For that reason, we created Pontem Network, the best experimentation platform for Diem. Our incentivized testnet, Move VM smart contract platform, and Pontem Blocks, our low-code development tool, make it possible to start building for Diem. Pontem offers a head start to developers looking to design projects for Meta’s Diem-powered metaverse.
To stay updated on our work, be sure to follow Pontem on Twitter, subscribe on Medium, and connect with us on Telegram.